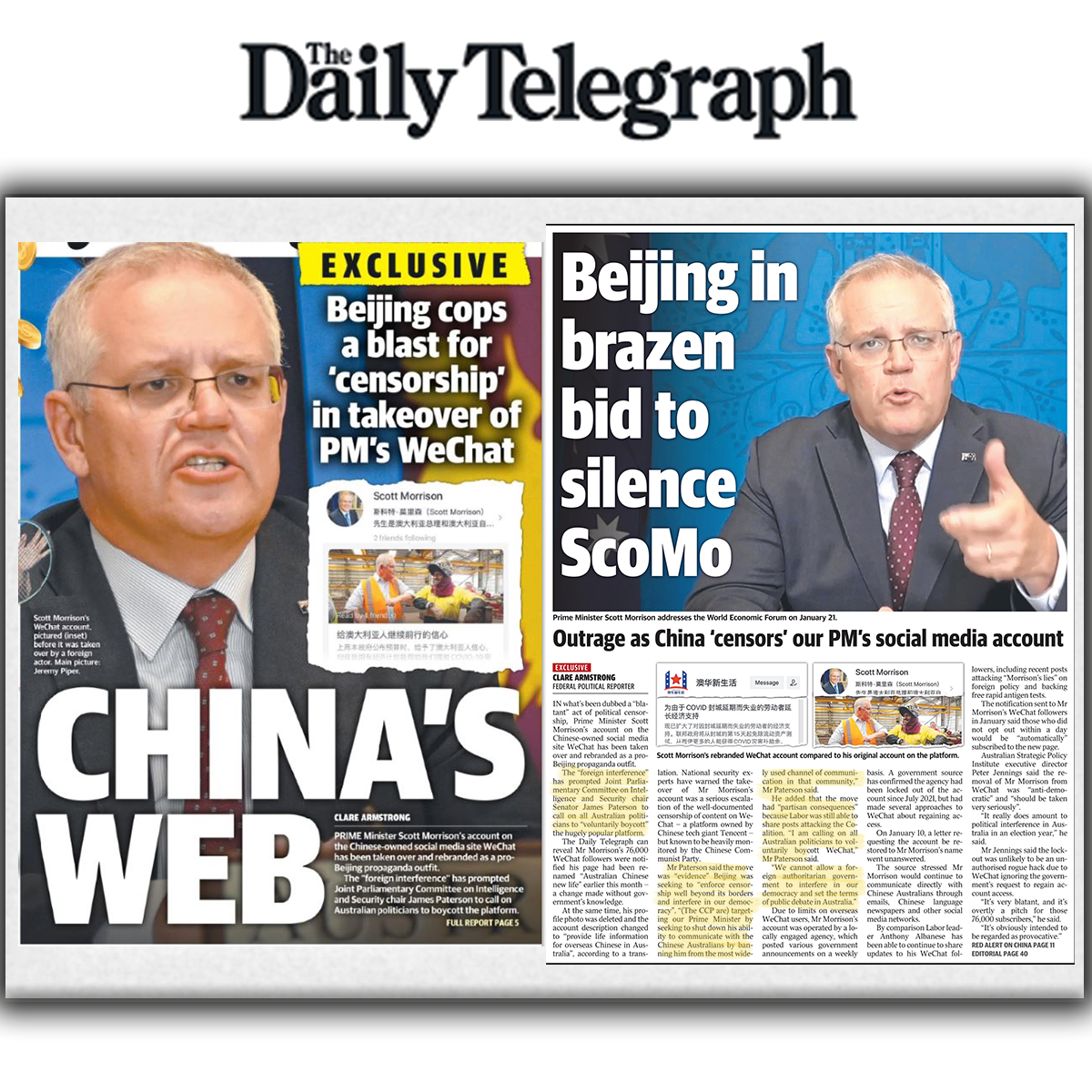 In a “blatant” act of political censorship, Prime Minister Scott Morrison’s account on the Chinese-owned social media site WeChat has been taken over and rebranded as a pro-Beijing propaganda outfit.

The “foreign interference” has prompted Joint Parliamentary Committee on Intelligence and Security chair Senator James Paterson to call on all Australian politicians to “voluntarily boycott” the hugely popular platform.

The Daily Telegraph can reveal Mr Morrison’s 76,000 WeChat followers were notified his page had been renamed “Australian Chinese new life” earlier this month - a change made without government’s knowledge.

At the same time, his profile photo was deleted and the account description changed to “provide life information for overseas Chinese in Australia,” according to a translation.

National security experts have warned the takeover of Mr Morrison’s account was a serious escalation of the well-documented censorship of content on WeChat, a platform owned by Chinese tech giant Tencent, but known to be heavily monitored by the Chinese Communist Party (CCP).

Mr Paterson said the move was “evidence” Beijing was seeking to “enforce censorship well beyond its borders and interfere in our democracy”.

“(The CCP are) targeting our Prime Minister by seeking to shut down his ability to communicate with the Chinese Australians by banning him from the most widely used channel of communication in that community,” he said.

Mr Paterson said the move had “partisan consequences” because Labor was still able to share posts attacking the Coalition.

“I am calling on all Australian politicians to voluntarily boycott WeChat,” he said.

“We cannot allow a foreign authoritarian government to interfere in our democracy and set the terms of public debate in Australia.”

Due to limits on overseas WeChat users, Mr Morrison’s account was operated by a locally engaged agency, which posted various government announcements on a weekly basis.

A government source confirmed the agency had been locked out of the account since July 2021, but had made several approaches to WeChat about regaining access.

On January 10 a letter requesting the account be restored to Mr Morrison’s name went unanswered.

The source stressed Mr Morrison would continue to communicate directly with Chinese Australians through emails, Chinese language newspapers and other social media networks.

By comparison Labor leader Anthony Albanese has been able to continue to share updates to his WeChat followers, including recent posts attacking “Morrison’s lies” on foreign policy and backing free rapid antigen tests.

The notification sent to Mr Morrison’s WeChat followers in January said those who did not opt out within a day would be “automatically” subscribed to the new page.

“It really does amount to political interference in Australia in an election year,” he said.

Mr Jennings said the lockout was unlikely to be an unauthorised rogue hack due to WeChat ignoring the government’s request to regain account access.

“It’s obviously intended to be regarded as provocative.”