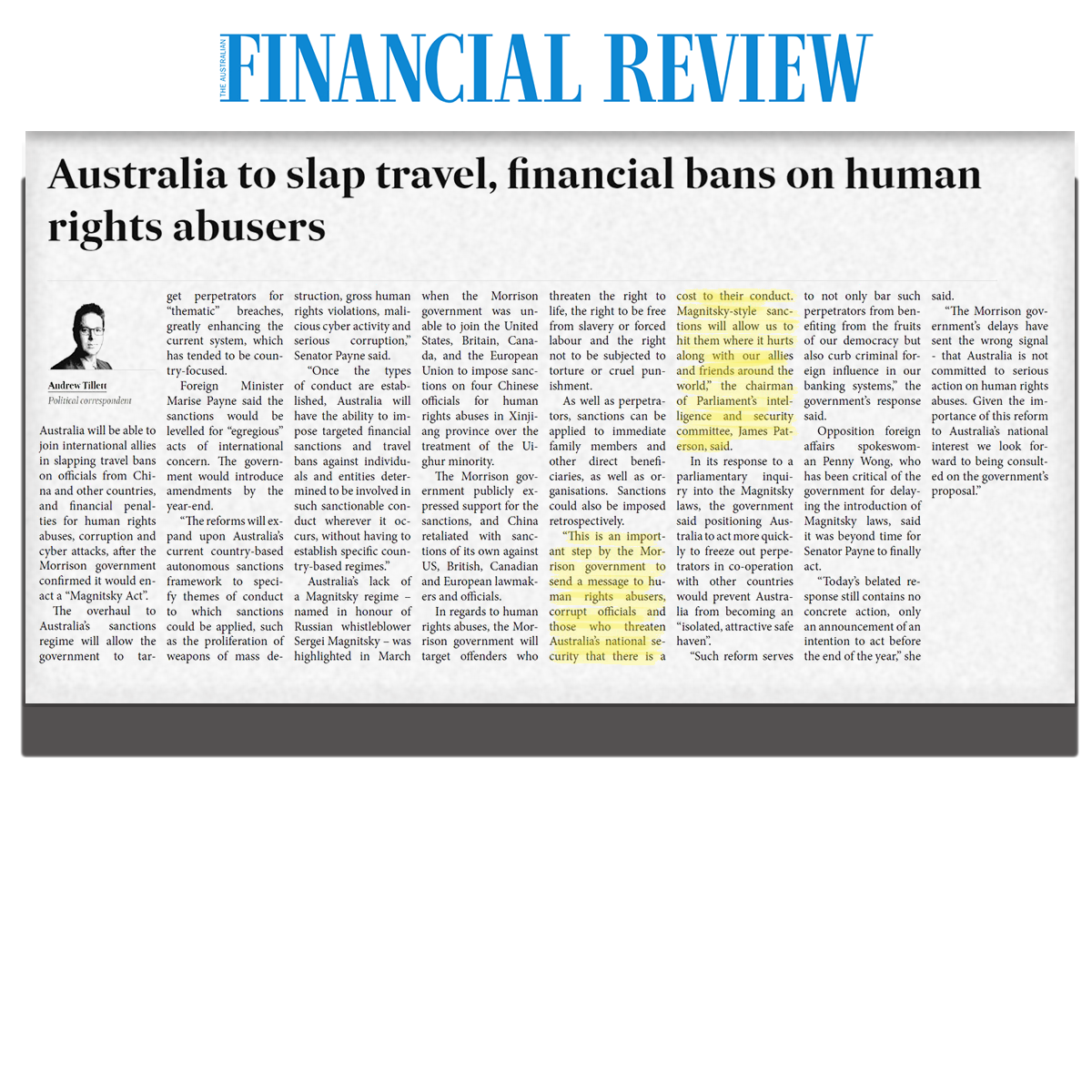 Australia will be able to join international allies in slapping travel bans on officials from China and other countries, and financial penalties for human rights abuses, corruption and cyber attacks, after the Morrison government confirmed it would enact a “Magnitsky Act”.

The overhaul to Australia’s sanctions regime will allow the government to target perpetrators for “thematic” breaches, greatly enhancing the current system, which has tended to be country-focused.

Foreign Minister Marise Payne said the sanctions would be levelled for “egregious” acts of international concern. The government would introduce amendments by the year-end.

“The reforms will expand upon Australia’s current country-based autonomous sanctions framework to specify themes of conduct to which sanctions could be applied, such as the proliferation of weapons of mass destruction, gross human rights violations, malicious cyber activity and serious corruption,” Senator Payne said.

“Once the types of conduct are established, Australia will have the ability to impose targeted financial sanctions and travel bans against individuals and entities determined to be involved in such sanctionable conduct wherever it occurs, without having to establish specific country-based regimes.”

Australia’s lack of a Magnitsky regime – named in honour of Russian whistleblower Sergei Magnitsky – was highlighted in March when the Morrison government was unable to join the United States, Britain, Canada, and the European Union to impose sanctions on four Chinese officials for human rights abuses in Xinjiang province over the treatment of the Uighur minority.

The Morrison government publicly expressed support for the sanctions, and China retaliated with sanctions of its own against US, British, Canadian and European lawmakers and officials.

In regards to human rights abuses, the Morrison government will target offenders who threaten the right to life, the right to be free from slavery or forced labour and the right not to be subjected to torture or cruel punishment.

As well as perpetrators, sanctions can be applied to immediate family members and other direct beneficiaries, as well as organisations. Sanctions could also be imposed retrospectively.

“This is an important step by the Morrison government to send a message to human rights abusers, corrupt officials and those who threaten Australia’s national security that there is a cost to their conduct. Magnitsky-style sanctions will allow us to hit them where it hurts along with our allies and friends around the world,” the chairman of Parliament’s intelligence and security committee, James Paterson, said.

In its response to a parliamentary inquiry into the Magnitsky laws, the government said positioning Australia to act more quickly to freeze out perpetrators in co-operation with other countries would prevent Australia from becoming an “isolated, attractive safe haven”.

“Such reform serves to not only bar such perpetrators from benefiting from the fruits of our democracy but also curb criminal foreign influence in our banking systems,” the government’s response said.

Opposition foreign affairs spokeswoman Penny Wong, who has been critical of the government for delaying the introduction of Magnitsky laws, said it was beyond time for Senator Payne to finally act.

“Today’s belated response still contains no concrete action, only an announcement of an intention to act before the end of the year,” she said.

“The Morrison government’s delays have sent the wrong signal - that Australia is not committed to serious action on human rights abuses. Given the importance of this reform to Australia’s national interest we look forward to being consulted on the government’s proposal.”