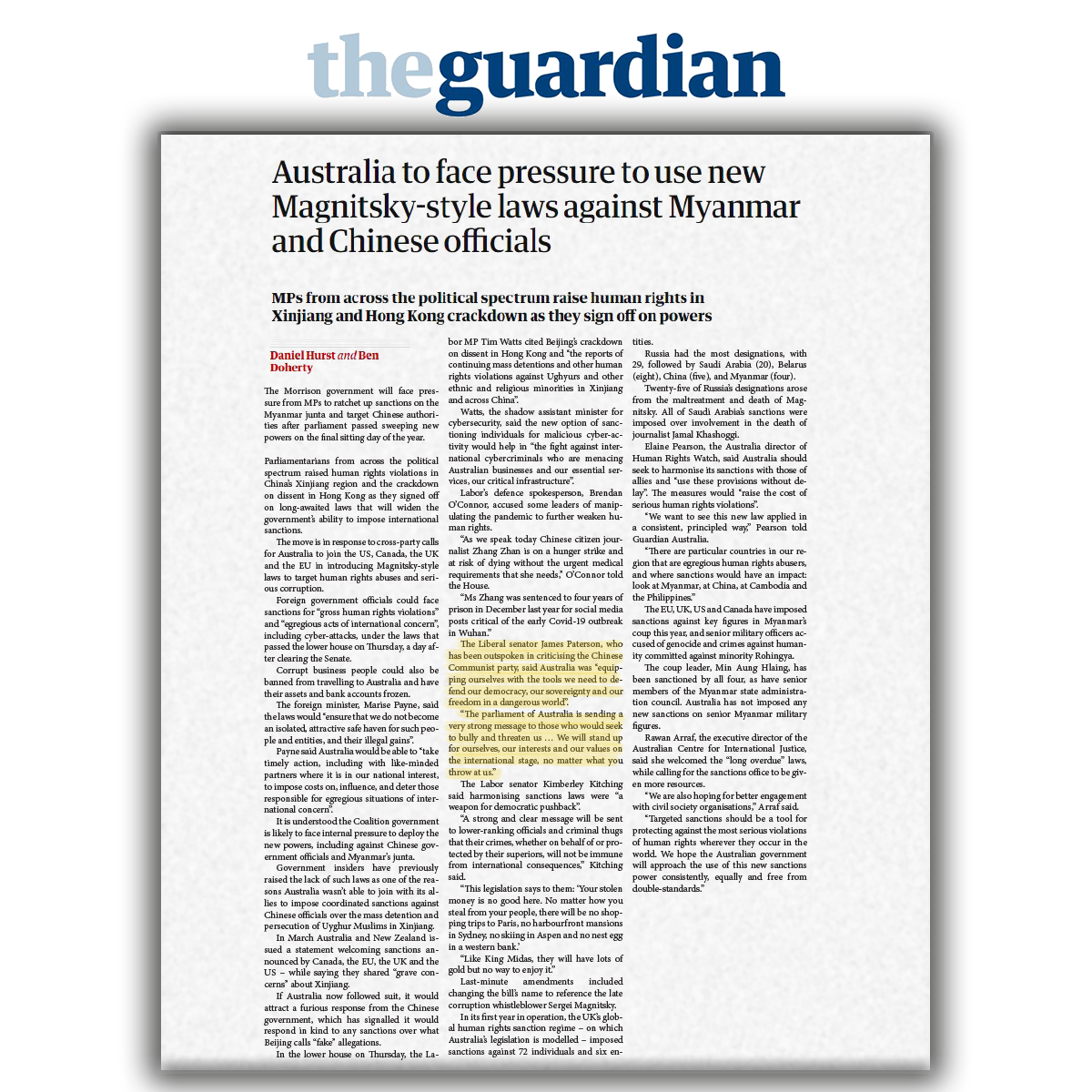 The Morrison government will face pressure from MPs to ratchet up sanctions on the Myanmar junta and target Chinese authorities after parliament passed sweeping new powers on the final sitting day of the year.

Parliamentarians from across the political spectrum raised human rights violations in China’s Xinjiang region and the crackdown on dissent in Hong Kong as they signed off on long-awaited laws that will widen the government’s ability to impose international sanctions.

The move is in response to cross-party calls for Australia to join the US, Canada, the UK and the EU in introducing Magnitsky-style laws to target human rights abuses and serious corruption.

Foreign government officials could face sanctions for “gross human rights violations” and “egregious acts of international concern”, including cyber-attacks, under the laws that passed the lower house on Thursday, a day after clearing the Senate.

Corrupt business people could also be banned from travelling to Australia and have their assets and bank accounts frozen.

The foreign minister, Marise Payne, said the laws would “ensure that we do not become an isolated, attractive safe haven for such people and entities, and their illegal gains”.

Payne said Australia would be able to “take timely action, including with like-minded partners where it is in our national interest, to impose costs on, influence, and deter those responsible for egregious situations of international concern”.

It is understood the Coalition government is likely to face internal pressure to deploy the new powers, including against Chinese government officials and Myanmar’s junta.

Government insiders have previously raised the lack of such laws as one of the reasons Australia wasn’t able to join with its allies to impose coordinated sanctions against Chinese officials over the mass detention and persecution of Uyghur Muslims in Xinjiang.

In March Australia and New Zealand issued a statement welcoming sanctions announced by Canada, the EU, the UK and the US – while saying they shared “grave concerns” about Xinjiang.

If Australia now followed suit, it would attract a furious response from the Chinese government, which has signalled it would respond in kind to any sanctions over what Beijing calls “fake” allegations.

In the lower house on Thursday, the Labor MP Tim Watts cited Beijing’s crackdown on dissent in Hong Kong and “the reports of continuing mass detentions and other human rights violations against Ughyurs and other ethnic and religious minorities in Xinjiang and across China”.

Watts, the shadow assistant minister for cybersecurity, said the new option of sanctioning individuals for malicious cyber-activity would help in “the fight against international cybercriminals who are menacing Australian businesses and our essential services, our critical infrastructure”.

“As we speak today Chinese citizen journalist Zhang Zhan is on a hunger strike and at risk of dying without the urgent medical requirements that she needs,” O’Connor told the House.

“Ms Zhang was sentenced to four years of prison in December last year for social media posts critical of the early Covid-19 outbreak in Wuhan.”

The Liberal senator James Paterson, who has been outspoken in criticising the Chinese Communist party, said Australia was “equipping ourselves with the tools we need to defend our democracy, our sovereignty and our freedom in a dangerous world”.

“The parliament of Australia is sending a very strong message to those who would seek to bully and threaten us … We will stand up for ourselves, our interests and our values on the international stage, no matter what you throw at us.”

“A strong and clear message will be sent to lower-ranking officials and criminal thugs that their crimes, whether on behalf of or protected by their superiors, will not be immune from international consequences,” Kitching said.

“This legislation says to them: ‘Your stolen money is no good here. No matter how you steal from your people, there will be no shopping trips to Paris, no harbourfront mansions in Sydney, no skiing in Aspen and no nest egg in a western bank.’

“Like King Midas, they will have lots of gold but no way to enjoy it.”

In its first year in operation, the UK’s global human rights sanction regime – on which Australia’s legislation is modelled – imposed sanctions against 72 individuals and six entities.

Russia had the most designations, with 29, followed by Saudi Arabia (20), Belarus (eight), China (five), and Myanmar (four).

Twenty-five of Russia’s designations arose from the maltreatment and death of Magnitsky. All of Saudi Arabia’s sanctions were imposed over involvement in the death of journalist Jamal Khashoggi.

Elaine Pearson, the Australia director of Human Rights Watch, said Australia should seek to harmonise its sanctions with those of allies and “use these provisions without delay”. The measures would “raise the cost of serious human rights violations”.

“There are particular countries in our region that are egregious human rights abusers, and where sanctions would have an impact: look at Myanmar, at China, at Cambodia and the Philippines.”

The EU, UK, US and Canada have imposed sanctions against key figures in Myanmar’s coup this year, and senior military officers accused of genocide and crimes against humanity committed against minority Rohingya.

The coup leader, Min Aung Hlaing, has been sanctioned by all four, as have senior members of the Myanmar state administration council. Australia has not imposed any new sanctions on senior Myanmar military figures.

Rawan Arraf, the executive director of the Australian Centre for International Justice, said she welcomed the “long overdue” laws, while calling for the sanctions office to be given more resources.

“We are also hoping for better engagement with civil society organisations,” Arraf said.

“Targeted sanctions should be a tool for protecting against the most serious violations of human rights wherever they occur in the world. We hope the Australian government will approach the use of this new sanctions power consistently, equally and free from double-standards.”