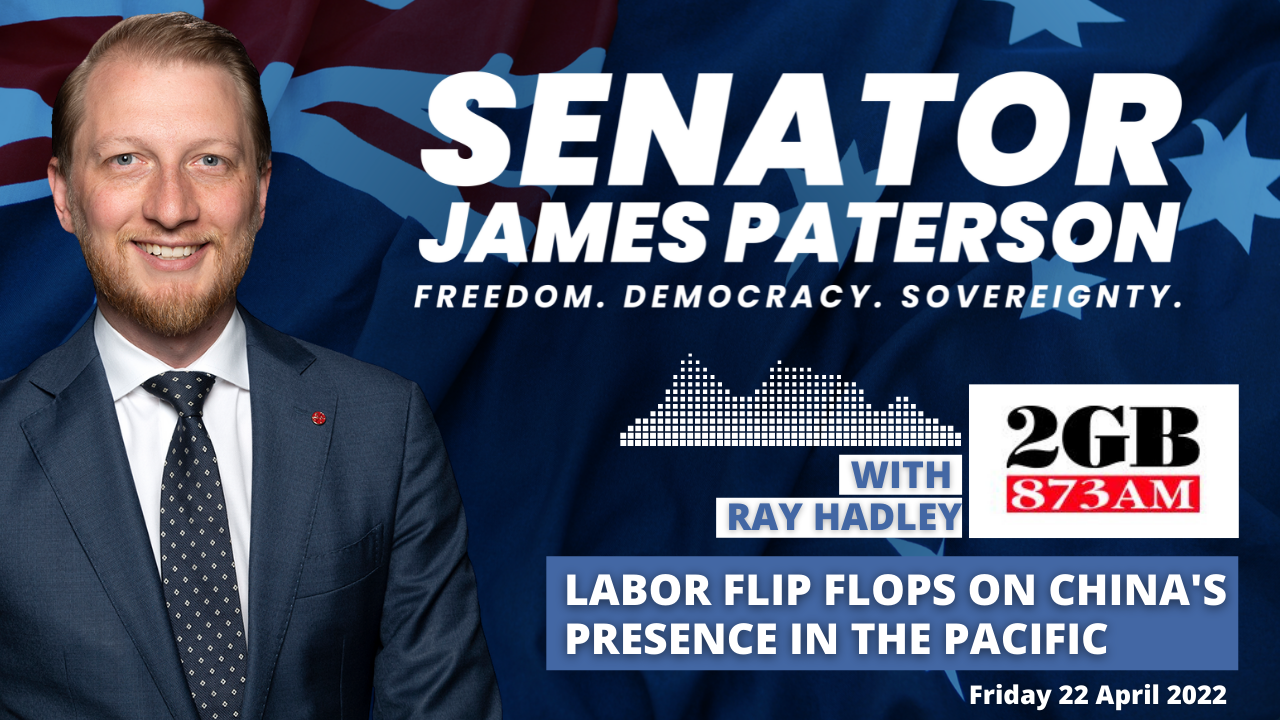 INTERVIEW WITH RAY HADLEY ON 2GB

RAY HADLEY: James Paterson is a Liberal Senator. He's the Chair of Intelligence and Security Committee he's on the line right now. Senator, good morning to you.

HADLEY: As you'd be aware, I have a regular chaton Thursday with your Defence Minister Peter Dutton. He made some comments yesterday about what is discussed at the very highest level about what's happening in the Solomon Islands at the moment, and he can't, for security reasons, tell me or our listeners much more. But in light of what we've heard this morning and what we now know, having spoken to Sharri Markson, are you concerned about the love affair Richard Marles was having with the Chinese Communist Government?

SENATOR PATERSON: I'm very concerned, Ray, and the Labor Party really needs to explain why Richard Marles is saying one thing when he's in China and a very different thing when he's in Australia. Because in his speech in China three years ago, he said he welcomed China's involvement in the Pacific and Australia should be pleased about China's aid and development programs here. And he's now saying that China's military presence in the region is not a good thing here in Australia, so he really needs to explain that contradiction.

HADLEY: But you say three years ago, according to Sharri Markson the author, he made this repeated claim only months ago. Didn't publish them, but made them.

SENATOR PATERSON: That's right. He published a pamphlet last year, actually, Ray, where he said that the fears about Chinese military presence in the region were overblown and the Australian government was not right to be concerned about that and that we should be more interested in the progress of the Pacific nations towards the Millennium Development Goals, and we shouldn't be seeking to deny Chinese presence in the region. Well, those are shockingly naive observations from someone who would be the Deputy Prime Minister in a Labor Government and who fancies himself as being the Defence Minister as well. In uncertain times like this, the last thing we need are weak people like Richard Marles in those portfolios.

HADLEY: And of course, others would be squirming in their electorates because all week, since the announcement about the deal between China and the Solomon Islands, they've been playing it on the Labor Party via Anthony Albanese and then Penny Wong and Tanya Plibersek about the government, your government, not doing enough to make sure it didn't happen.

SENATOR PATERSON: Exactly right. I can't believe that the Labor Party can't get their line straight here. It's either a good thing to have China active and involved in the Pacific or it's not. And they need to work out what their real position is. I suspect the one that they're putting on in the election campaign is not their real position at all. But it's exactly as Richard Marles articulated it, in that speech in Beijing three years ago.

HADLEY: Are you concerned if there were to be an election next year in the Solomon Islands and just say the Opposition were to win that Mr Sogavare may go to the Chinese and say this has been rorted, you know, I'm really the Prime Minister and I'm the one that's in bed with you. We can't have this other mob in government because they might not want you here. And then we might have involvement from Chinese military to quell the unrest in the Solomon Islands. Is that a real concern? Was that a little bit too far-fetched?

SENATOR PATERSON: Look, obviously, we need to be very careful about commenting on the domestic political situations of any other country. We respect the Solomon Islands and their right to make their own decisions in their own national interest and their sovereignty. Unlike China, we actually do live up to those promises. We do respect their right to make their own decisions. But it would obviously be very concerning if the Chinese government did seek to intervene in the domestic affairs of another countrylike that in our region, and we would not welcome it.

HADLEY: Ok. I appreciate your time. Thanks for talking to me.