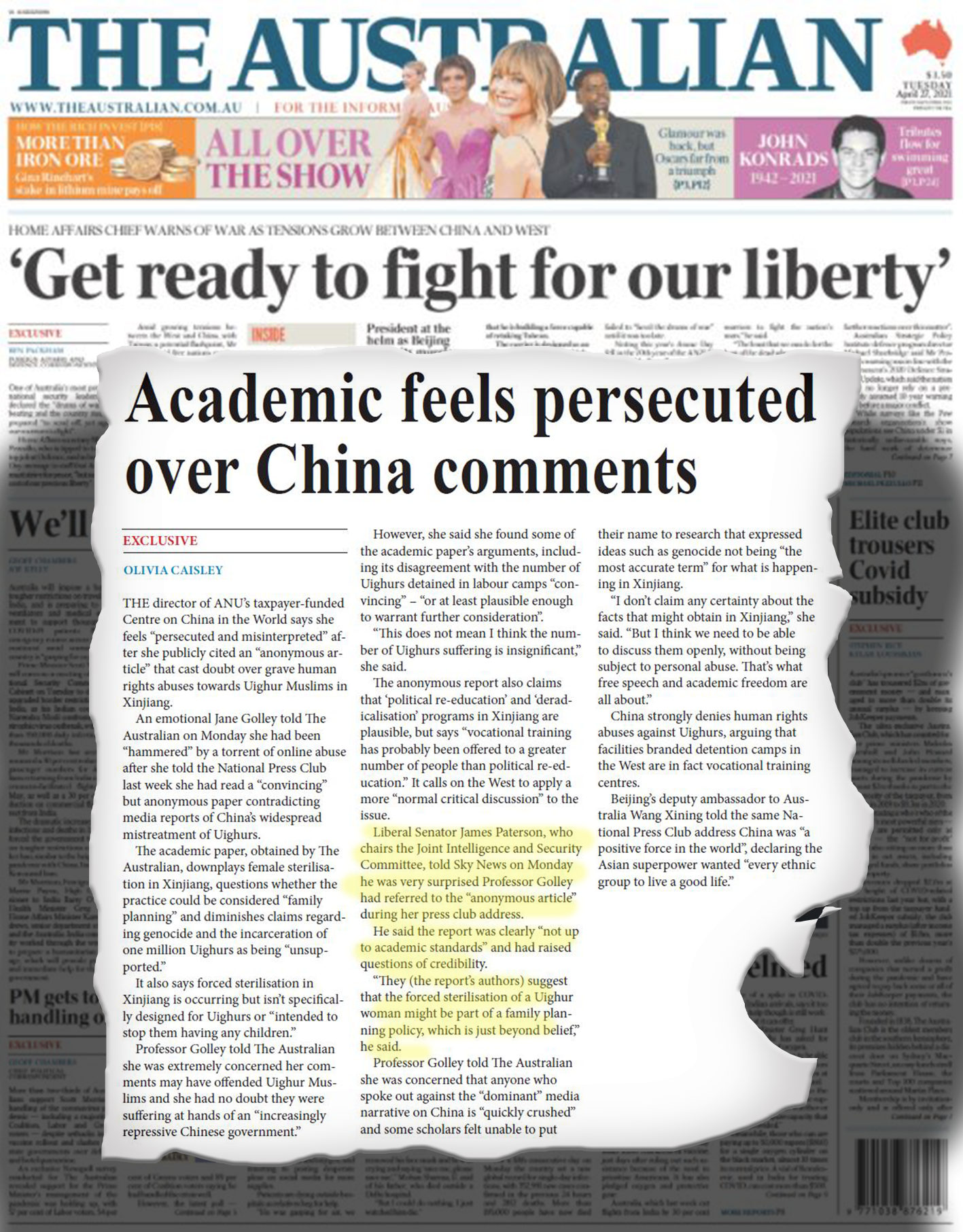 The director of ANU’s taxpayer-funded Centre on China in the World says she feels “persecuted and misinterpreted” after she publicly cited an “anonymous article” that cast doubt over grave human rights abuses towards Uighur Muslims in Xinjiang.

An emotional Jane Golley told The Australian on Monday she had been “hammered” by a torrent of online abuse after she told the National Press Club last week she had read a “convincing” but anonymous paper contradicting media reports of China’s widespread mistreatment of Uighurs.

The academic paper, obtained by The Australian, downplays female sterilisation in Xinjiang, questions whether the practice could be considered “family planning” and diminishes claims regarding genocide and the incarceration of one million Uighurs as being “unsupported.”

It also says forced sterilisation in Xinjiang is occurring but isn’t specifically designed for Uighurs or “intended to stop them having any children.”

Professor Golley told The Australian she was extremely concerned her comments may have offended Uighur Muslims and she had no doubt they were suffering at hands of an “increasingly repressive Chinese government.”

However, she said she found some of the academic paper’s arguments, including its disagreement with the number of Uighurs detained in labour camps “convincing” – “or at least plausible enough to warrant further consideration”.

“This does not mean I think the number of Uighurs suffering is insignificant,” she said.

The anonymous report also claims that ‘political re-education’ and ‘deradicalisation’ programs in Xinjiang are plausible, but says “vocational training has probably been offered to a greater number of people than political re-education.” It calls on the West to apply a more “normal critical discussion” to the issue.

Liberal Senator James Paterson, who chairs the Joint Intelligence and Security Committee, told Sky News on Monday he was very surprised Professor Golley had referred to the “anonymous article” during her press club address.

He said the report was clearly “not up to academic standards” and had raised questions of credibility.

“They (the report’s authors) suggest that the forced sterilisation of a Uighur woman might be part of a family planning policy, which is just beyond belief,” he said.

Professor Golley told The Australian she was concerned that anyone who spoke out against the “dominant” media narrative on China is “quickly crushed” and some scholars felt unable to put their name to research that expressed ideas such as genocide not being “the most accurate term” for what is happening in Xinjiang.

“I don’t claim any certainty about the facts that might obtain in Xinjiang,” she said. “But I think we need to be able to discuss them openly, without being subject to personal abuse. That’s what free speech and academic freedom are all about.”