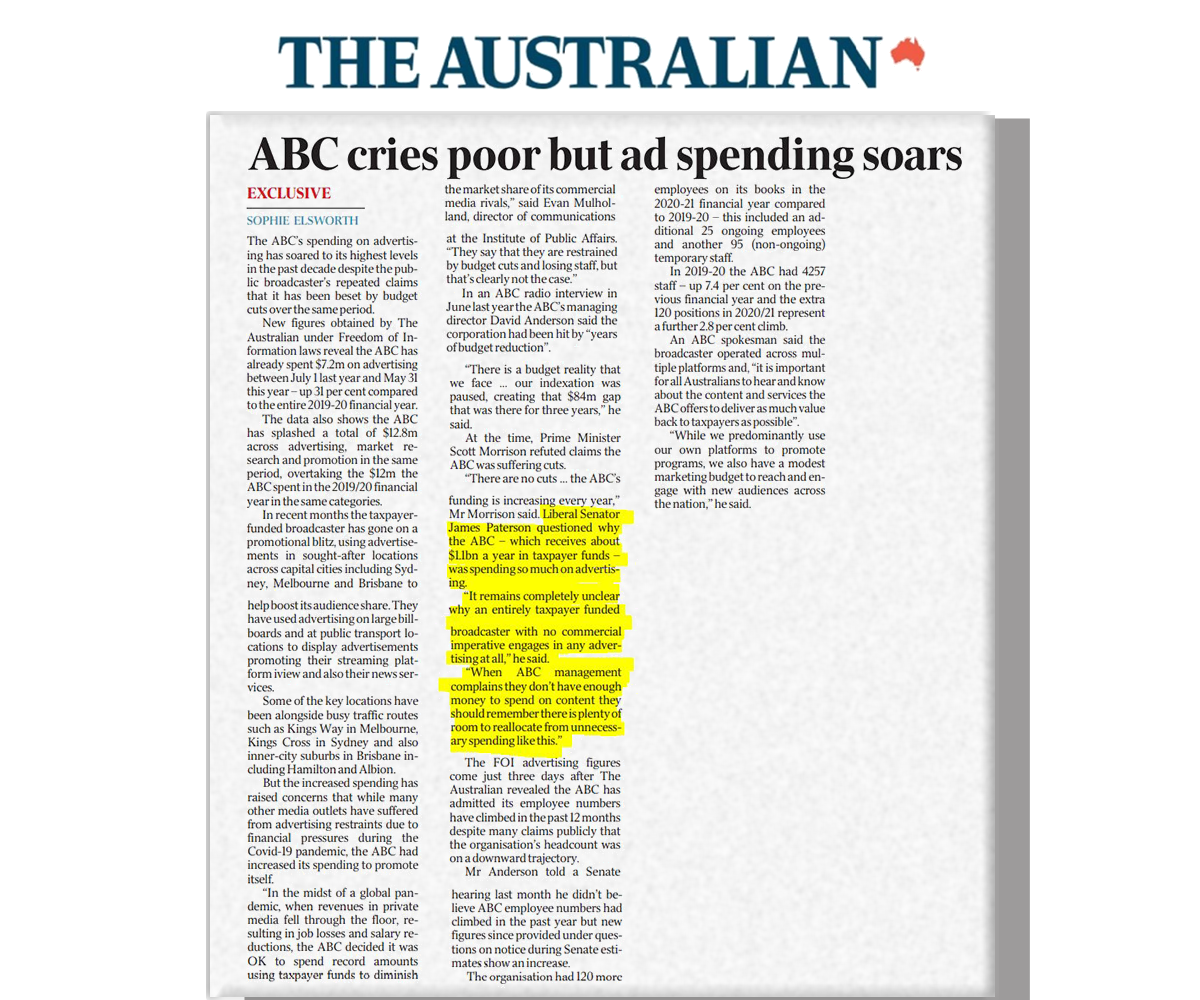 The ABC’s spending on advertising has soared to its highest levels in the past decade despite the public broadcaster’s repeated claims that it has been beset by budget cuts over the same period.

New figures obtained by The Australian under Freedom of Information laws reveal the ABC has already spent $7.2m on advertising between July 1 last year and May 31 this year – up 31 per cent compared to the entire 2019-20 financial year.

The data also shows the ABC has splashed a total of $12.8m across advertising, market research and promotion in the same period, overtaking the $12m the ABC spent in the 2019/20 financial year in the same categories.

In recent months the taxpayer-funded broadcaster has gone on a promotional blitz, using advertisements in sought-after locations across capital cities including Sydney, Melbourne and Brisbane to help boost its audience share. They have used advertising on large billboards and at public transport locations to display advertisements promoting their streaming platform iview and also their news services.

Some of the key locations have been alongside busy traffic routes such as Kings Way in Melbourne, Kings Cross in Sydney and also inner-city suburbs in Brisbane including Hamilton and Albion.

But the increased spending has raised concerns that while many other media outlets have suffered from advertising restraints due to financial pressures during the Covid-19 pandemic, the ABC had increased its spending to promote itself.

“In the midst of a global pandemic, when revenues in private media fell through the floor, resulting in job losses and salary reductions, the ABC decided it was OK to spend record amounts using taxpayer funds to diminish the market share of its commercial media rivals,” said Evan Mulholland, director of communications at the Institute of Public Affairs. “They say that they are restrained by budget cuts and losing staff, but that’s clearly not the case.”

In an ABC radio interview in June last year the ABC’s managing director David Anderson said the corporation had been hit by “years of budget reduction”.

“There is a budget reality that we face … our indexation was paused, creating that $84m gap that was there for three years,” he said.

“There are no cuts … the ABC’s funding is increasing every year,” Mr Morrison said. Liberal Senator James Paterson questioned why the ABC – which receives about $1.1bn a year in taxpayer funds – was spending so much on advertising.

“It remains completely unclear why an entirely taxpayer funded broadcaster with no commercial imperative engages in any advertising at all,” he said.

“When ABC management complains they don’t have enough money to spend on content they should remember there is plenty of room to reallocate from unnecessary spending like this.”

The FOI advertising figures come just three days after The Australian revealed the ABC has admitted its employee numbers have climbed in the past 12 months despite many claims publicly that the organisation’s headcount was on a downward trajectory.

Mr Anderson told a Senate hearing last month he didn’t believe ABC employee numbers had climbed in the past year but new figures since provided under questions on notice during Senate estimates show an increase.

The organisation had 120 more employees on its books in the 2020-21 financial year compared to 2019-20 – this included an additional 25 ongoing employees and another 95 (non-ongoing) temporary staff.

An ABC spokesman said the broadcaster operated across multiple platforms and, “it is important for all Australians to hear and know about the content and services the ABC offers to deliver as much value back to taxpayers as possible”.

“While we predominantly use our own platforms to promote programs, we also have a modest marketing budget to reach and engage with new audiences across the nation,” he said.