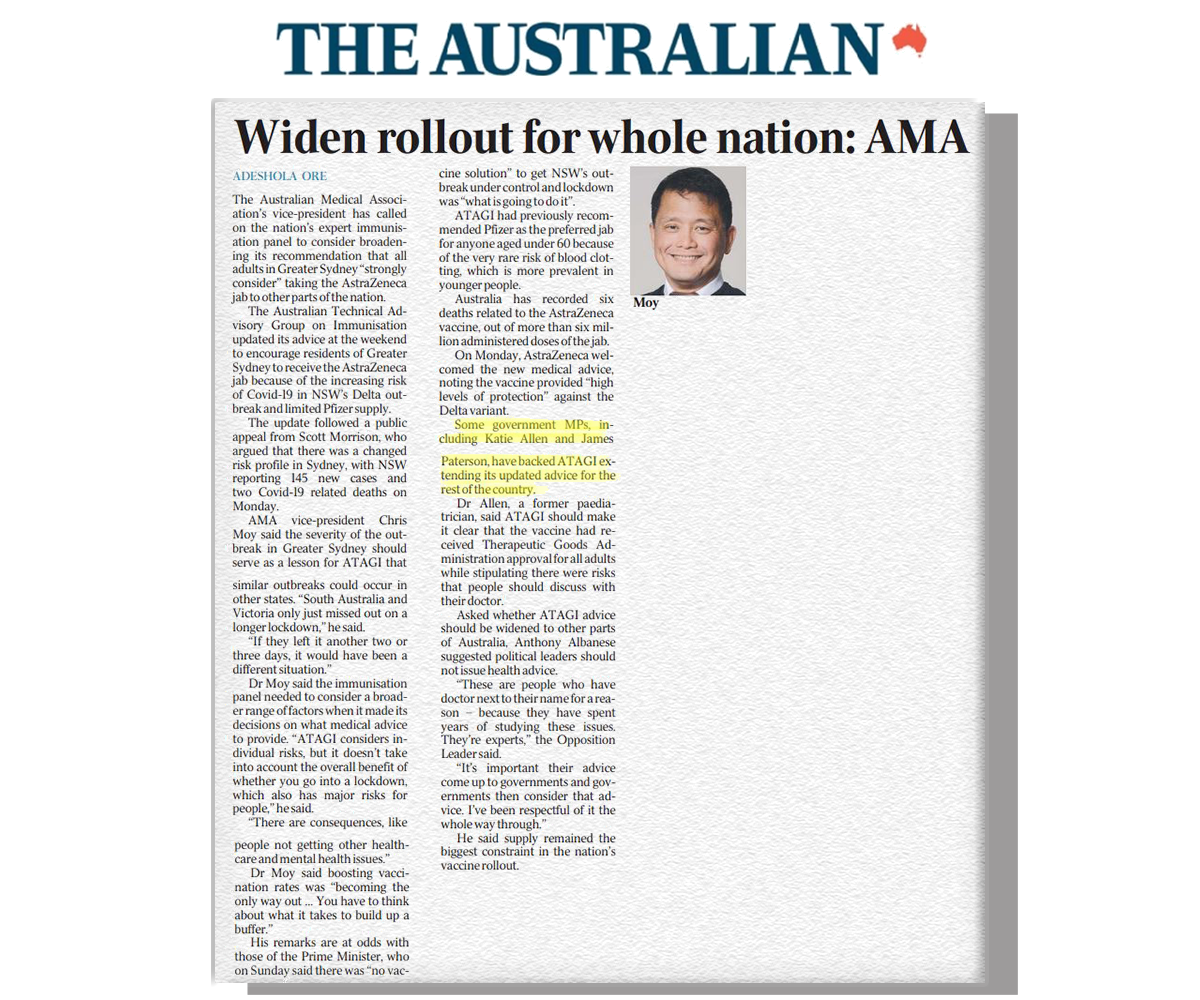 The Australian Medical Association’s vice-president has called on the nation’s expert immunisation panel to consider broadening its recommendation that all adults in Greater Sydney “strongly consider” taking the AstraZeneca jab to other parts of the nation.

The Australian Technical Advisory Group on Immunisation updated its advice at the weekend to encourage residents of Greater Sydney to receive the AstraZeneca jab because of the increasing risk of Covid-19 in NSW’s Delta outbreak and limited Pfizer supply.

The update followed a public appeal from Scott Morrison, who argued that there was a changed risk profile in Sydney, with NSW reporting 145 new cases and two Covid-19 related deaths on Monday.

AMA vice-president Chris Moy said the severity of the outbreak in Greater Sydney should serve as a lesson for ATAGI that similar outbreaks could occur in other states. “South Australia and Victoria only just missed out on a longer lockdown,” he said.

“If they left it another two or three days, it would have been a different situation.”

Dr Moy said the immunisation panel needed to consider a broader range of factors when it made its decisions on what medical advice to provide. “ATAGI considers individual risks, but it doesn’t take into account the overall benefit of whether you go into a lockdown, which also has major risks for ­people,” he said.

“There are consequences, like people not getting other healthcare and mental health issues.”

Dr Moy said boosting vaccination rates was “becoming the only way out … You have to think about what it takes to build up a buffer.”

His remarks are at odds with those of the Prime Minister, who on Sunday said there was “no vaccine solution” to get NSW’s outbreak under control and lockdown was “what is going to do it”.

ATAGI had previously recommended Pfizer as the preferred jab for anyone aged under 60 because of the very rare risk of blood clotting, which is more prevalent in younger people.

Australia has recorded six deaths related to the AstraZeneca vaccine, out of more than six million administered doses of the jab.

On Monday, AstraZeneca welcomed the new medical advice, noting the vaccine provided “high levels of protection” against the Delta variant.

Some government MPs, including Katie Allen and James Paterson, have backed ATAGI extending its updated advice for the rest of the country.

Dr Allen, a former paediatrician, said ATAGI should make it clear that the vaccine had received Therapeutic Goods Administration approval for all adults while stipulating there were risks that people should discuss with their doctor.

Asked whether ATAGI advice should be widened to other parts of Australia, Anthony Albanese suggested political leaders should not issue health advice.

“These are people who have doctor next to their name for a reason – because they have spent years of studying these issues. They’re experts,” the Opposition Leader said.

“It’s important their advice come up to governments and governments then consider that advice. I’ve been respectful of it the whole way through.”

He said supply remained the biggest constraint in the nation’s vaccine rollout.