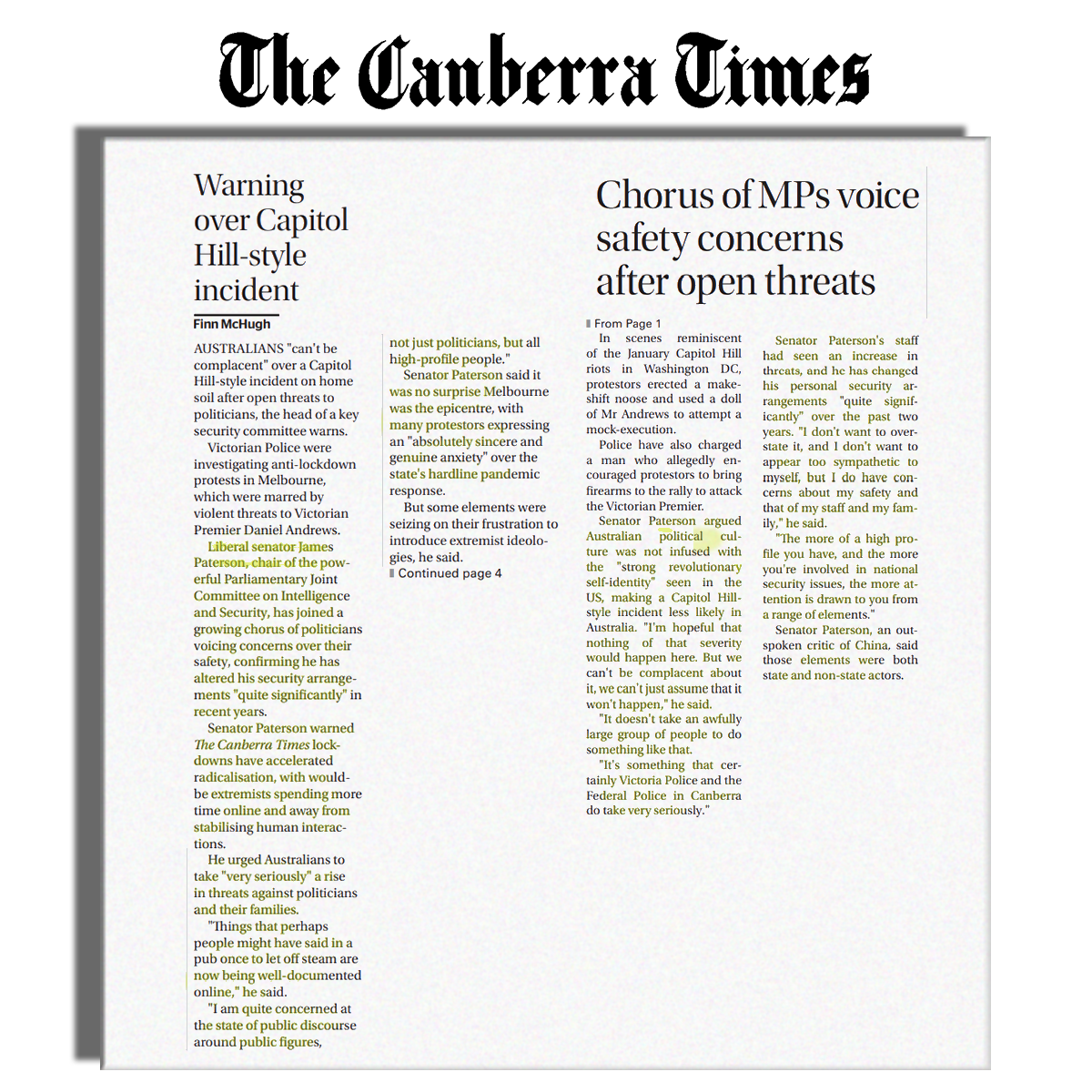 Australians "can't be complacent" over a Capitol Hill-style incident on home soil after open threats to politicians, the head of a key security committee has warned.

Victorian Police were investigating anti-lockdown protests in Melbourne, which were marred by violent threats to Victorian Premier Daniel Andrews.

Liberal senator James Paterson, chairman of the powerful Parliamentary Joint Committee on Intelligence and Security, has joined a growing chorus of politicians voicing concerns over their safety, confirming he had altered his security arrangements "quite significantly".

He urged Australians to take "very seriously" a rise in threats against politicians and their families.

"Things that perhaps people might have said in a pub once to let off steam are now being well-documented online," he said.

"I am quite concerned at the state of public discourse around public figures, not just politicians, but all high-profile people."

Senator Paterson said it was no surprise Melbourne was the epicentre, with many protesters expressing an "absolutely sincere and genuine anxiety" over the state's hard-line pandemic response.

But some elements were seizing on their frustration to introduce extremist ideologies, he said.

In scenes reminiscent of the January Capitol Hill riots in Washington DC, protesters erected a makeshift noose and used a doll of Mr Andrews to attempt a mock-execution.

Police were investigating a number of threats made against Victorian MPs, and have charged a man who allegedly encouraged protesters to bring firearms to the rally to attack the Victorian Premier.

Senator Paterson argued Australian political culture was not infused with the "strong revolutionary self-identity" seen in the US, which made a Capitol Hill-style incident less likely in Australia.

"I'm hopeful that nothing of that severity would happen here. But we can't be complacent about it, we can't just assume that it won't happen," he said.

"I'd hope that it's less likely, but it doesn't take an awfully large group of people to do something like that, to overwhelm the security ... at our parliaments.

"It's something that certainly Victoria Police and the Federal Police in Canberra do take very seriously."

Senator Paterson's staff had seen an increase in threats, and he has changed his personal security arrangements "quite significantly" over the past two years.

"I don't want to overstate it, and I don't want to appear too sympathetic to myself, but I do have concerns about my safety and that of my staff and my family," he said.

"The more of a high profile you have, and the more you're involved in national security issues, the more attention is drawn to you from a range of elements."

Senator Paterson, who was barred from entering China after speaking out against the Chinese Communist Party's abuse of the Muslim Uyghur minority in Xinjiang, said those elements were both state and non-state actors.