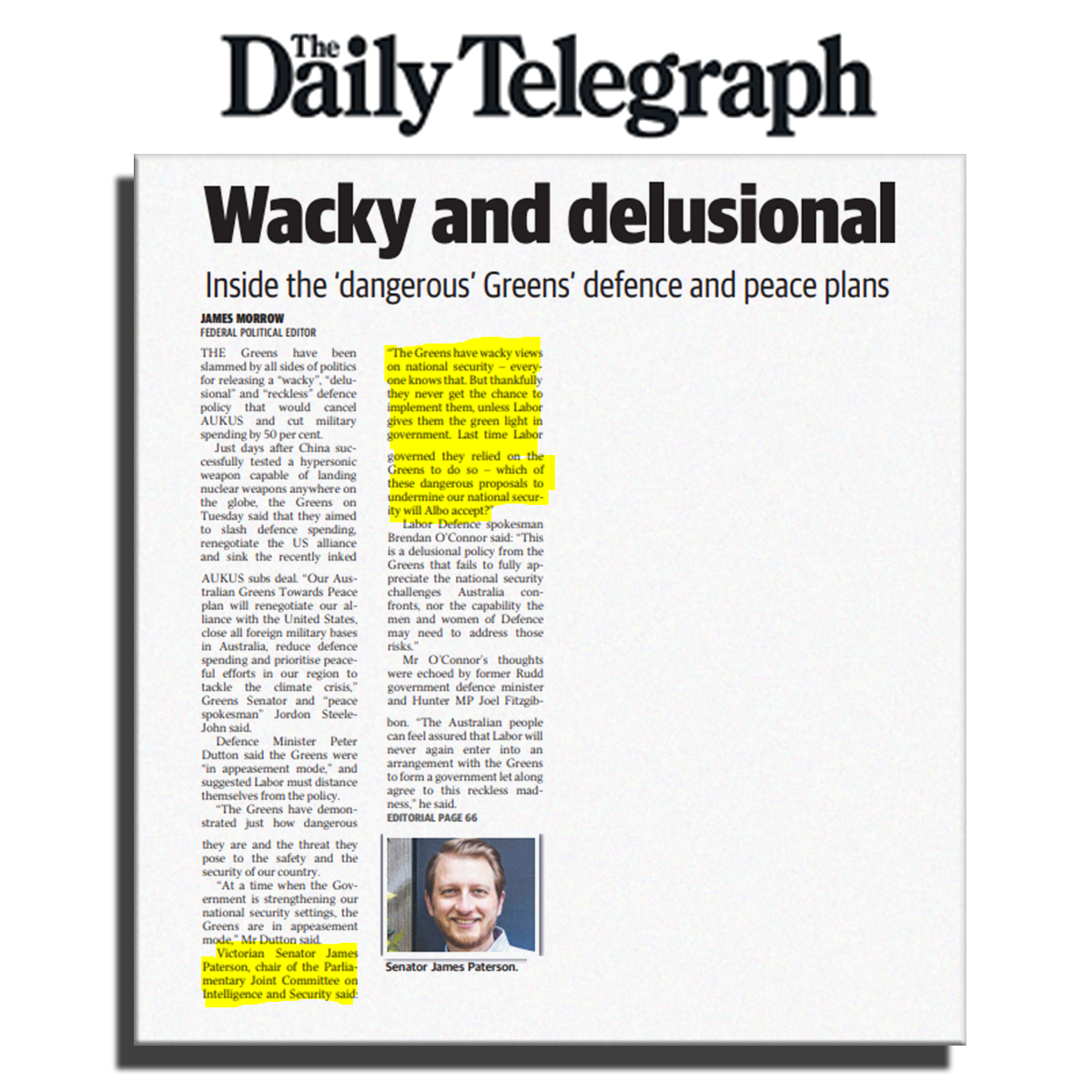 The Greens have been slammed by all sides of politics for releasing a “wacky”, “delusional”, and “reckless” defence policy that would cancel AUKUS and cut military spending by 50 per cent just days after China successfully tested a hypersonic weapon capable of landing nuclear weapons anywhere on the globe.

Coinciding with the 20th anniversary of operations in Afghanistan, the Greens on Tuesday said that they aimed to slash defence spending, renegotiate the US alliance and sink the recently inked AUKUS subs deal.

“Our Australian Greens Towards Peace plan will renegotiate our alliance with the United States, close all foreign military bases in Australia, reduce defence spending and prioritise peaceful efforts in our region to tackle the climate crisis,” said Greens Senator and “peace spokesman” Jordon Steele-John.

Both Coalition and Liberal figures immediately slammed the Greens’ proposals, coming at a time of increasing geopolitical instability and belligerence on the part of Beijing.

Defence Minister Peter Dutton was scathing, saying the Greens were “in appeasement mode,” and suggested that Labor must distance themselves from the policy.

“The Greens have demonstrated just how dangerous they are and the threat they pose to the safety and the security of our country.

“Along with their fellow travellers, they were tragically wrong on boats and national security.

“At a time when the Government is strengthening our national security settings, the Greens are in appeasement mode,” Mr Dutton said.

Victorian Senator James Paterson, chair of the Parliamentary Joint Committee on Intelligence and Security said: “The Greens have wacky views on national security – everyone knows that.

“But thankfully they never get the chance to implement them, unless Labor gives them the green light in government.

“Last time Labor governed they relied on the Greens to do so – which of these dangerous proposals to undermine our national security will Albo accept?”

“This is a delusional policy from the Greens that fails to fully appreciate the national security challenges Australia confronts, nor the capability the men and women of Defence may need to address those risks,” Labor Defence Spokesman Brendan O’Connor said.

Mr O’Connor’s thoughts were echoed by former Rudd government defence minister and Hunter MP Joel Fitzgibbon who said: “the Australian people can feel assured that Labor will never again enter into an arrangement with the Greens to form a Government let along agree to this reckless madness.”

The Greens’ plan comes at a time when China is increasingly flexing its muscle both in the Pacific and around the world.

Having launched a number of naval and air drills designed to intimidate Taiwan in recent weeks, on Sunday it was revealed that China had tested a nuclear-capable hypersonic missile that reportedly caught Western intelligence officials off-guard.

Asked in Washington about the test, White House spokeswoman Jen Psaki said that the US “welcome(s) stiff competition, but we do not want that competition to veer into conflict.”