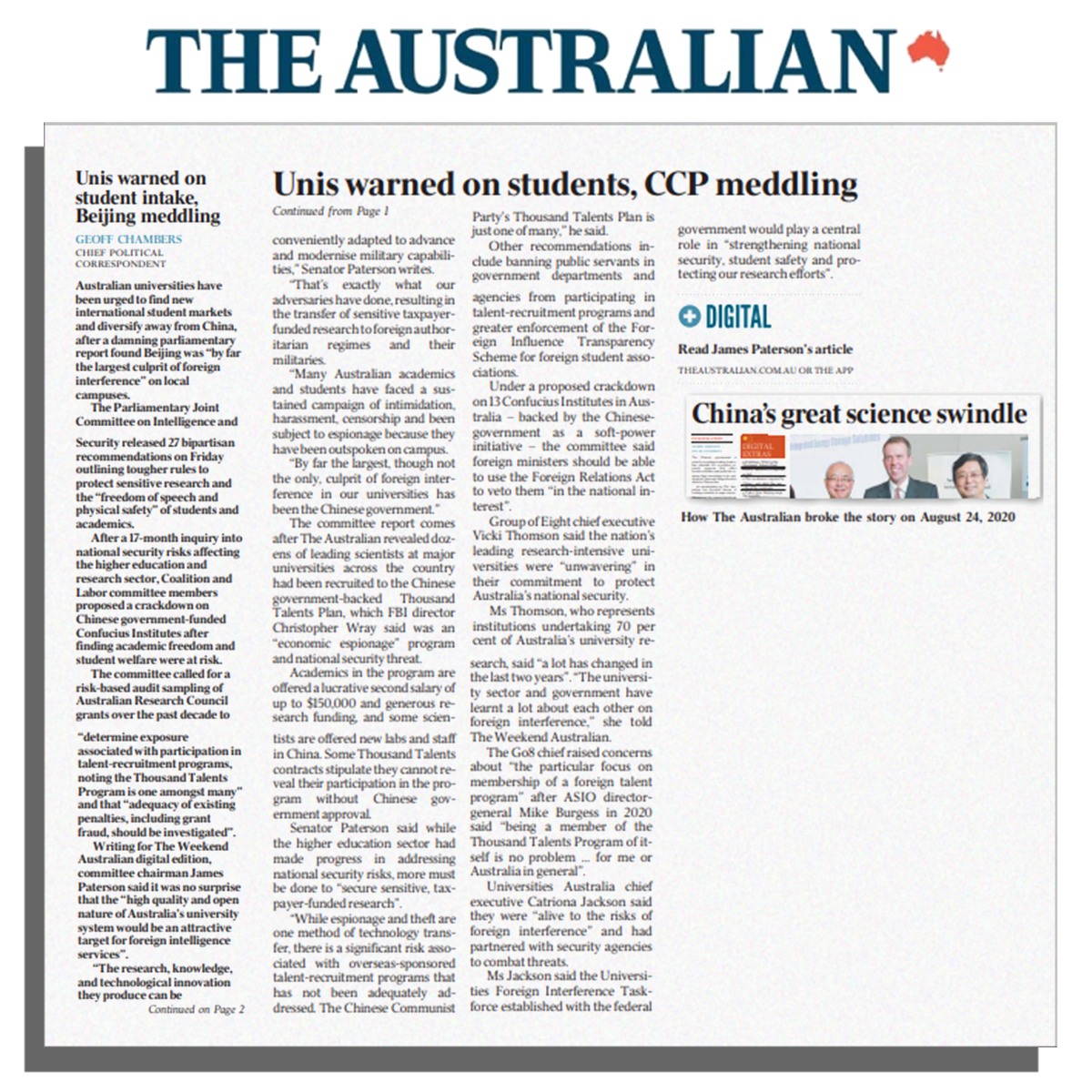 Australian universities have been urged to find new international student markets and diversify away from China, after a damning parliamentary report found Beijing was “by far the largest culprit of foreign interference” on local campuses.

The parliamentary joint committee on intelligence and security released 27 bipartisan recommendations on Friday outlining tougher rules to protect sensitive research and the “freedom of speech and physical safety” of students and academics.

After a 17-month inquiry into national security risks affecting the higher education and research sector, Coalition and Labor committee members proposed a crackdown on Chinese government-funded Confucius Institutes after finding academic freedom and student welfare were at risk.

The committee called for a risk-based audit sampling Australian Research Council grants over the past decade to “determine exposure associated with participation in talent ­recruitment programs, noting the Thousand Talents Program is one amongst many” and that ­“adequacy of existing penalties, including grant fraud, should be investigated”.

Writing for The Weekend Australian digital edition, PJCIS chair James Paterson said it was no surprise that the “high quality and open nature of Australia’s university system would be an ­attractive target for foreign intelligence services”.

“The research, knowledge, and technological innovation they produce can be conveniently adapted to advance and modernise military capabilities,” Senator Paterson writes.

“That’s exactly what our ­adversaries have done, resulting in the transfer of sensitive taxpayer-funded research to foreign authoritarian regimes and their militaries.

“Many Australian academics and students have faced a sustained campaign of intimidation, harassment, censorship and been subject to espionage because they have been outspoken on campus.

“By far the largest, though not the only, culprit of foreign interference in our universities has been the Chinese government.”

The PJCIS report comes after The Australian revealed dozens of leading ­scientists at major universities across the country had been recruited to the Chinese government-backed Thousand Talents Plan, which FBI director Christopher Wray said was an “econo­mic espionage” program and ­national security threat.

Academics in the program are offered a lucrative second ­salary of up to $150,000 and generous research funding, and some scientists are offered new labs and staff in China.

Some Thousand Talents contracts stipulate they cannot reveal their participation in the program without Chinese government ­approval.

Senator Paterson said while the higher education sector had made progress in addressing ­national security risks, more must be done to “secure sensitive, taxpayer-funded research”.

“While espionage and theft are one method of technology transfer, there is a significant risk associated with overseas sponsored talent recruitment programs that has not been adequately addressed. The Chinese Communist Party’s Thousand Talents Plan is just one of many,” he said.

Other recommendations ­include banning public servants in government departments and agencies from participating in talent-recruitment programs and greater enforcement of the ­Foreign Influence Transparency Scheme for foreign student associations.

Under a proposed crackdown on 13 Confucius Institutes in Australia – backed by the Chinese-government as a soft-power initiative – the PJCIS said foreign ministers should be able to use the Foreign Relations Act to veto them “in the national interest”.

Ms Thomson, who represents institutions undertaking 70 per cent of Australia’s university research, said “a lot has changed in the last two years”.

“The university sector and government have learnt a lot about each other on foreign interference,” Ms Thomson told The Weekend Australian.