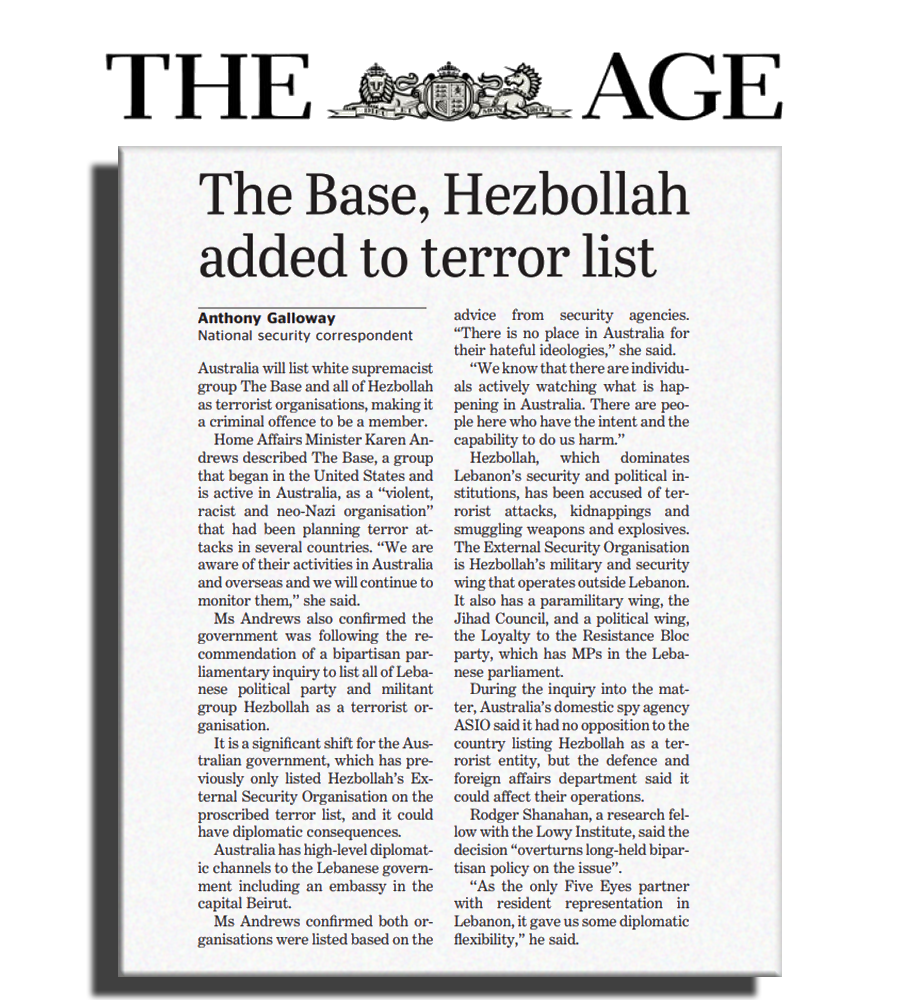 Australia will list white supremacist group The Base and all of Hezbollah as terrorist organisations, making it a criminal offence to be a member.

Home Affairs Minister Karen Andrews described The Base, a group that began in the United States and is active in Australia, as a “violent, racist and neo-Nazi organisation” that had been planning terror attacks in several countries.

“We are aware of their activities in Australia and overseas and we will continue to monitor them,” she said.

Ms Andrews also confirmed the government was following the recommendation of a bipartisan parliamentary inquiry to list all of Lebanese political party and militant group Hezbollah as a terrorist organisation.

It is a significant shift from the Australian government, which has previously only listed Hezbollah’s External Security Organisation on the proscribed terror list, and it could have diplomatic consequences.

Ms Andrews confirmed both organisations were listed based on the advice from security agencies.

“There is no place in Australia for their hateful ideologies,” she said. “We know that there are individuals actively watching what is happening in Australia. There are people here who have the intent and the capability to do us harm.”

“It’s not a decision that I have taken lightly; it’s one that I have taken all the appropriate actions to make sure that the threat that these two organisations are posing to Australia are real and that they are credible.”

Hezbollah, which dominates Lebanon’s security and political institutions, has been accused of terrorist attacks, kidnappings and smuggling weapons and explosives. The External Security Organisation is Hezbollah’s military and security wing that operates outside Lebanon. It also has a paramilitary wing, the Jihad Council, and a political wing, the Loyalty to the Resistance Bloc party, which has MPs in the Lebanese parliament.

During the inquiry into the matter, Australia’s domestic spy agency ASIO said it had no opposition to the country listing Hezbollah as a terrorist entity, but the defence and foreign affairs department said it could affect their operations.

Rodger Shanahan, a research fellow with the Lowy Institute, said the decision “overturns long-held bipartisan policy on the issue”.

“As the only Five Eyes partner with resident representation in Lebanon, it gave us some diplomatic flexibility,” he said.

The listing of all of Hezbollah is vindication for Liberal senator James Paterson, chair of the Parliamentary Joint Committee on Intelligence and Security, who had been pushing for the change.

Senator Paterson said the government “carefully weighed up all considerations”.

“We’ve been briefed in a classified sense which I can’t talk about – there are other competing considerations that the government did need to weigh up. But ultimately, they’ve arrived at the right decision,” he said.

“It’s consistent with the action that many of our allies have taken over the last decade – the European Union, the United States, Canada, the United Kingdom – they’ve all made very similar decisions.”

The Australia Israel and Jewish Affairs Council executive director Colin Rubenstein said the move would send a strong message that Australia will “not tolerate these Iran-backed terrorists”.

Dr Rubenstein also applauded the decision to list The Base, which he described as “a militant white supremacist movement that actively promotes itself internationally, including in Australia”.

“It is a threat to all Australians, including Jewish Australians, with its violent and antisemitic agenda,” he said.

The decision to proscribe a terrorist organisation lies with Australia’s Governor-General, on the advice of the government, which then criminalises any membership or association with that group. Other groups on the list include al-Qaeda, Somalia’s al-Shabab and Islamic State.