Terror back on streets 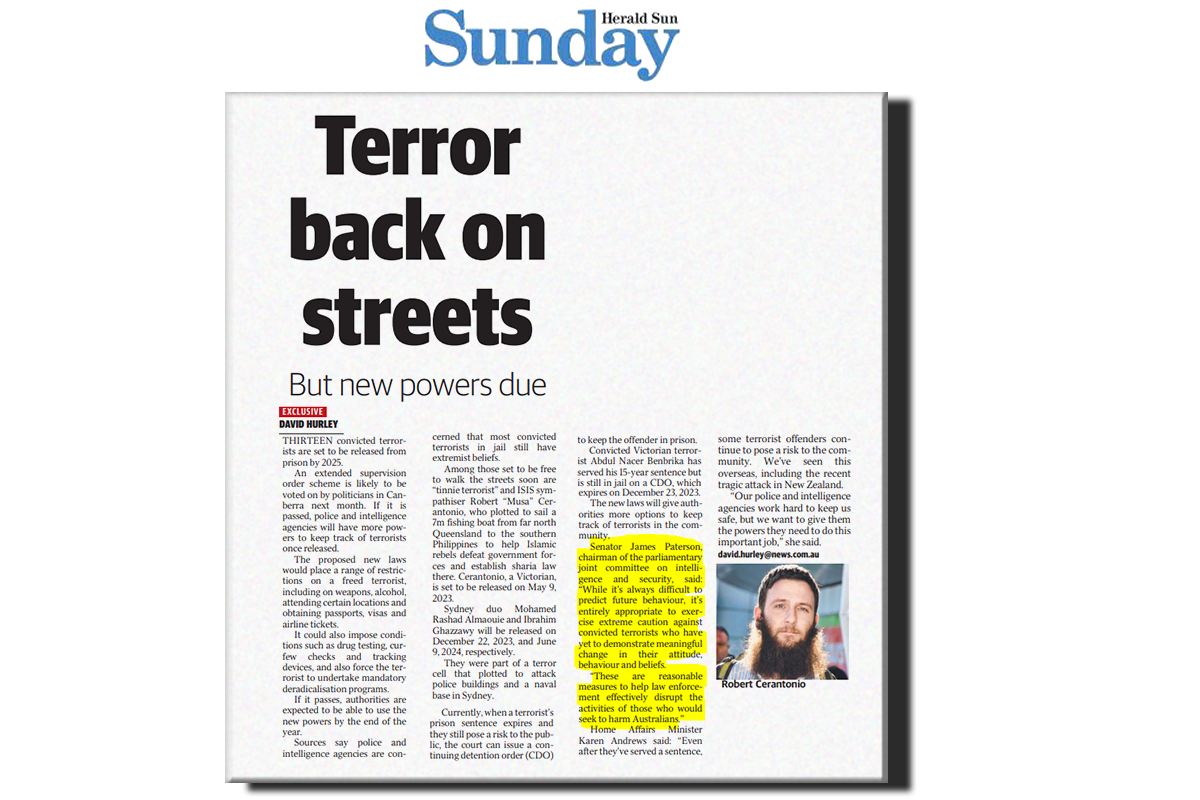 Thirteen convicted terrorists are set to be released from prison by 2025.

The Sunday Herald Sun can reveal an extended supervision order scheme will likely be voted on by politicians in Canberra next month and, if it passes, police and intelligence agencies will have more powers to keep track of terrorists when they are released.

The proposed new laws would place a range of restrictions on a freed terrorist, ­including on weapons, alcohol, attending certain locations and obtaining documents, such as passports, visas and airline tickets.

It could also impose conditions such as drug testing, curfew checks, tracking devices and also force the terrorist to undertake mandatory deradicalisation programs. If it passes, authorities are expected to be able to make use of the new powers by the end of the year.

Among the terrorists set to be free to walk the streets soon is “tinnie terrorist” and Islamic State sympathiser Robert “Musa” Cerantonio (above), who plotted to sail a 7m fishing boat off the Queensland coast, with plans to help overthrow the southern Philippines government and establish sharia law there.

Sydney duo Mohamed Rashad Almaouie and Ibrahim Ghazzawy will be released on December 22, 2023, and June 9, 2024.

Haisem Zahab has been sentenced for providing support or resources to a terrorist organization. Picture: Channel 9

They were part of a terror cell which plotted to attack police buildings and a naval base in Sydney.

Currently when a terrorist’s prison sentence expires and they still pose a risk to the public the court can issue a continuing detention order to keep the offender in ­prison.

The new laws will give authorities more options to keep track of terrorists in the community.

Senator James Paterson, chairman of the parliamentary joint committee on intelligence and security, said: “While it’s always difficult to predict future behaviour, it’s entirely appropriate to exercise extreme caution against convicted terrorists who have yet to demonstrate meaningful change in their attitude, behaviour and beliefs.

“These are reasonable measures to help law enforcement officers effectively disrupt the activities of those who would seek to harm ­Australians.”

Home Affairs Minister Karen Andrews said: “Even after they’ve served a sentence, some terrorist offenders continue to pose a risk to the community.

“Our police and intelligence agencies work hard day-in, day-out to keep us safe, but we want to give them the powers they need to do this important job.

“To keep Australians safe, the Morrison government has legislation before the parliament that would authorise extended supervision orders.

“These orders would ­provide for tailored monitoring of high-risk terrorist ­offenders once they are ­released into the community, supporting our law enforcement agencies to keep us all safe.”