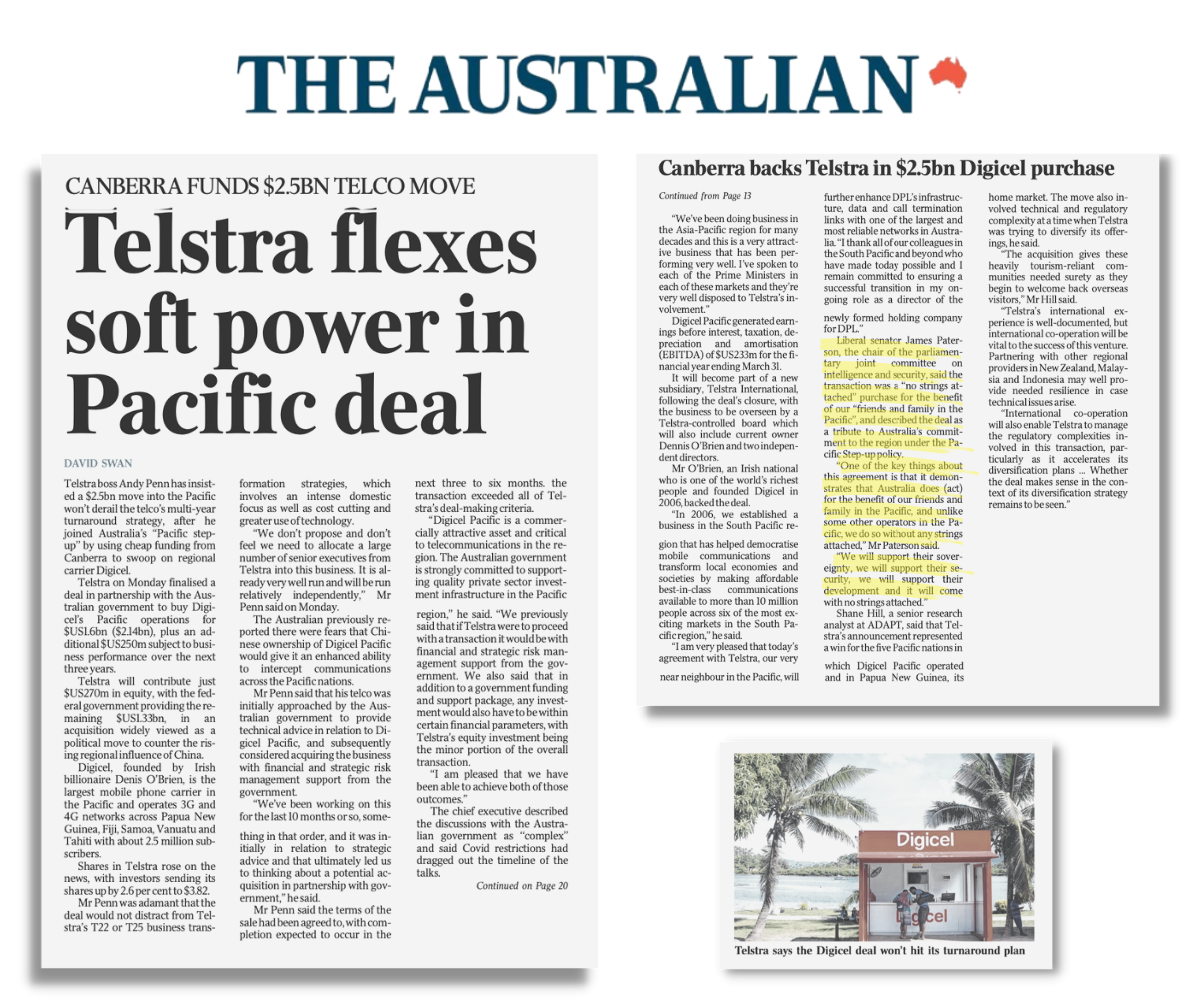 Telstra on Monday finalised a deal in partnership with the Australian government to buy Digicel’s Pacific operations for $US1.6bn ($2.14bn), plus an additional $US250m subject to business performance over the next three years.

Telstra will contribute just $US270m in equity, with the federal government providing the remaining $US1.33bn, in an acquisition that has been widely viewed as a political move to counter the rising regional influence of China.

Digicel, founded by Irish billionaire Denis O’Brien, is the largest mobile phone carrier in the Pacific and operates 3G and 4G networks across Papua New Guinea, Fiji, Samoa, Vanuatu and Tahiti with about 2.5 million subscribers.

Shares in Telstra rose on the news, with investors sending its shares up by 2.6 per cent to $3.82, and Mr Penn was adamant that the deal would not distract from Telstra’s T22 or T25 business transformation strategies, which involves an intense domestic focus as well as cost cutting and greater use of technology.

“We don’t propose and don’t feel we need to allocate a large number of senior executives from Telstra into this business, it is already very well run and will be run relatively independently,” Mr Penn said on Monday.

The Australian previously reported there were fears that Chinese ownership of Digicel Pacific would give it an enhanced ability to intercept communications across the Pacific nations.

Mr Penn said that his telco was initially approached by the Australian government to provide technical advice in relation to Digicel Pacific, and subsequently considered acquiring the business with financial and strategic risk management support from the government.

“We’ve been working on this for the last 10 months or so, something in that order, and it was initially in relation to strategic advice and that ultimately led us to thinking about a potential acquisition in partnership with government.”

Mr Penn said the terms of the sale had now been agreed with completion expected to occur in the next three to six months, and that the transaction exceeds all Telstra’s dealmaking criteria.

“Digicel Pacific is a commercially attractive asset and critical to telecommunications in the region. The Australian government is strongly committed to supporting quality private sector investment infrastructure in the Pacific region,” he said.

“We previously said that if Telstra were to proceed with a transaction it would be with financial and strategic risk management support from the government. We also said that in addition to a government funding and support package, any investment would also have to be within certain financial parameters with Telstra’s equity investment being the minor portion of the overall transaction.

“I am pleased that we have been able to achieve both of those outcomes.”

The chief executive described the discussions with the Australian government as ‘complex’ and said Covid restrictions had dragged out the timeline of the talks.

“We’ve been doing business in the Asia Pacific region for many decades and this is a very attractive business that has been performing very well. I’ve spoken to each of the Prime Ministers in each of these markets and they’re very well disposed to Telstra’s involvement.”

Digicel Pacific generated earnings before interest, taxation, depreciation and amortisation (EBITDA) of $US233m for the financial year ending March 31 2021. It will become part of a new subsidiary Telstra International following the deal’s closure, with the business to be overseen by a Telstra-controlled board which will also include current owner Dennis O’Brien and two independent directors.

Mr O’Brien, an Irish national who is one of the world’s richest people and founded Digicel in 2006, backed the deal.

“I am very pleased that today’s agreement with Telstra, our very near neighbour in the Pacific, will further enhance DPL’s infrastructure, data and call termination links with one of the largest and most reliable networks in Australia.

“I thank all of our colleagues in the South Pacific and beyond who have made today possible and I remain committed to ensuring a successful transition in my ongoing role as a director of the newly formed holding company for DPL.”

Liberal Senator James Paterson, the chair of Parliamentary Joint Committee on Intelligence and Security, said the transaction was a “no strings attached” purchase for the benefit of our “friends and family in the Pacific”, and described the deal as a tribute to Australia’s commitment to the region under the Pacific Step-up policy.

“One of the key things about this agreement is that it demonstrates that Australia does so for the benefit of our friends and family in the Pacific, and unlike some other operators in the Pacific, we do so without any strings attached,” Mr Paterson said.

Shane Hill, a senior research analyst at ADAPT, said that Telstra’s announcement represented a win for the five Pacific nations in which Digicel Pacific operates and in Papua New Guinea, its home market. The move also involves technical and regulatory complexity at a time when Telstra is trying to diversify its offerings, he said.

“The acquisition gives these heavily tourism-reliant communities needed surety as they begin to welcome back overseas visitors,” Mr Hill said.

“Telstra’s international experience is well-documented, but international co-operation will be vital to the success of this venture. Partnering with other regional providers in New Zealand, Malaysia, and Indonesia may well provide needed resilience in case technical issues arise.

“International co-operation will also enable Telstra to manage the regulatory complexities involved in this transaction, particularly as it accelerates its diversification plans announced in November 2020. Whether the deal makes sense in the context of its diversification strategy remains to be seen.”