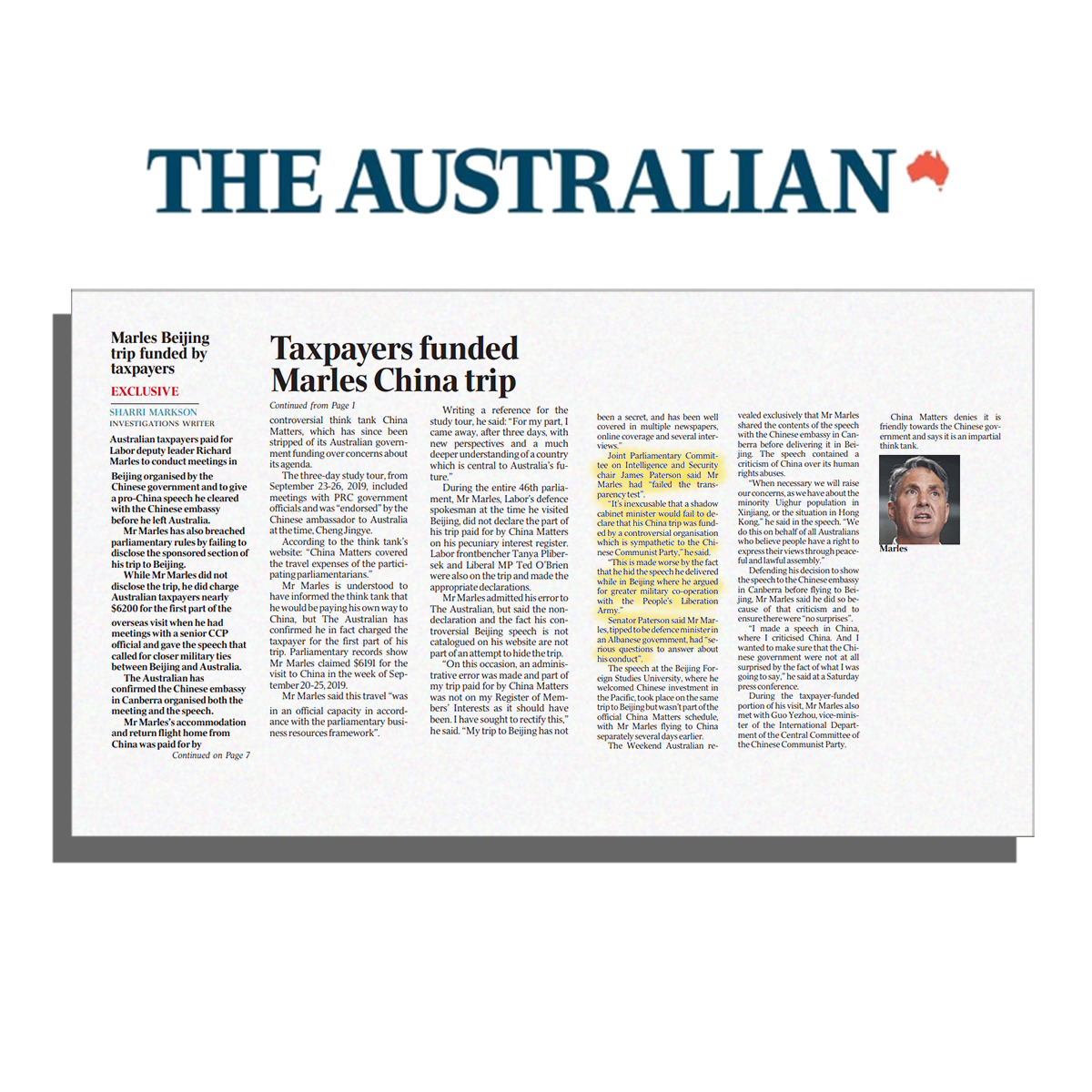 Taxpayers paid for Labor deputy leader Richard Marles to conduct meetings in Beijing organised by the Chinese government and to give a pro-China speech he cleared with the Chinese embassy before he left Australia.

Mr Marles has also breached parliamentary rules by failing to disclose the sponsored section of his trip to Beijing.

While Mr Marles did not disclose the trip, he did charge Australian taxpayers nearly $6200 for the first part of the overseas visit when he had meetings with a senior CCP official and gave the speech that called for closer military ties between Beijing and Australia.

The Australian has confirmed the Chinese embassy in Canberra organised both the meeting and the speech.

Mr Marles’s accommodation and return flight home from China was paid for by controversial think tank China Matters, which has since been stripped of its Australian government funding over concerns about its agenda.

The three-day study tour, from September 23-26, 2019, included meetings with PRC government officials and was “endorsed” by the Chinese ambassador to Australia at the time, Cheng Jingye.

According to the think tank’s website: “China Matters covered the travel expenses of the participating parliamentarians.”

Mr Marles is understood to have informed the think tank that he would be paying his own way to China, but The Australian has confirmed he in fact charged the taxpayer for the first part of his trip. Parliamentary records show Mr Marles claimed $6191 for the visit to China in the week of September 20-25, 2019.

Mr Marles said this travel “was in an official capacity in accordance with the parliamentary business resources framework”.

Writing a reference for the study tour, he said: “For my part, I came away, after three days, with new perspectives and a much deeper understanding of a country which is central to Australia’s future.”

During the entire 46th parliament, Mr Marles, Labor’s defence spokesman at the time he visited Beijing, did not declare the part of his trip paid for by China Matters on his pecuniary interest register. Labor frontbencher Tanya Plibersek and Liberal MP Ted O’Brien were also on the trip and made the appropriate declarations.

Mr Marles admitted his error to The Australian, but said the non-declaration and the fact his controversial Beijing speech is not catalogued on his website are not part of an attempt to hide the trip.

“On this occasion, an administrative error was made and part of my trip paid for by China Matters was not on my Register of Members’ Interests as it should have been. I have sought to rectify this,” he said. “My trip to Beijing has not been a secret, and has been well covered in multiple newspapers, online coverage and several interviews.”

“It’s inexcusable that a shadow cabinet minister would fail to declare that his China trip was funded by a controversial organisation which is sympathetic to the Chinese Communist Party,” he said.

“This is made worse by the fact that he hid the speech he delivered while in Beijing where he argued for greater military co-operation with the People’s Liberation Army.”

Senator Paterson said Mr Marles, tipped to be defence minister in an Albanese government, had “serious questions to answer about his conduct”.

The speech at the Beijing Foreign Studies University, where he welcomed Chinese investment in the Pacific, took place on the same trip to Beijing but wasn’t part of the official China Matters schedule, with Mr Marles flying to China separately several days earlier.

The Weekend Australian revealed exclusively that Mr Marles shared the contents of the speech with the Chinese embassy in Canberra before delivering it in Beijing. The speech contained a criticism of China over its human rights abuses.

“When necessary we will raise our concerns, as we have about the minority Uighur population in Xinjiang, or the situation in Hong Kong,” he said in the speech. “We do this on behalf of all Australians who believe people have a right to express their views through peaceful and lawful assembly.”

Defending his decision to show the speech to the Chinese embassy in Canberra before flying to Beijing, Mr Marles said he did so because of that criticism and to ensure there were “no surprises”.

“I made a speech in China, where I criticised China. And I wanted to make sure that the Chinese government were not at all surprised by the fact of what I was going to say,” he said at a Saturday press conference.

During the taxpayer-funded portion of his visit, Mr Marles also met with Guo Yezhou, vice-minister of the International Department of the Central Committee of the Chinese Communist Party.

China Matters denies it is friendly towards the Chinese government and says it is an impartial think tank.