Switch doctor to get vaccine: PM 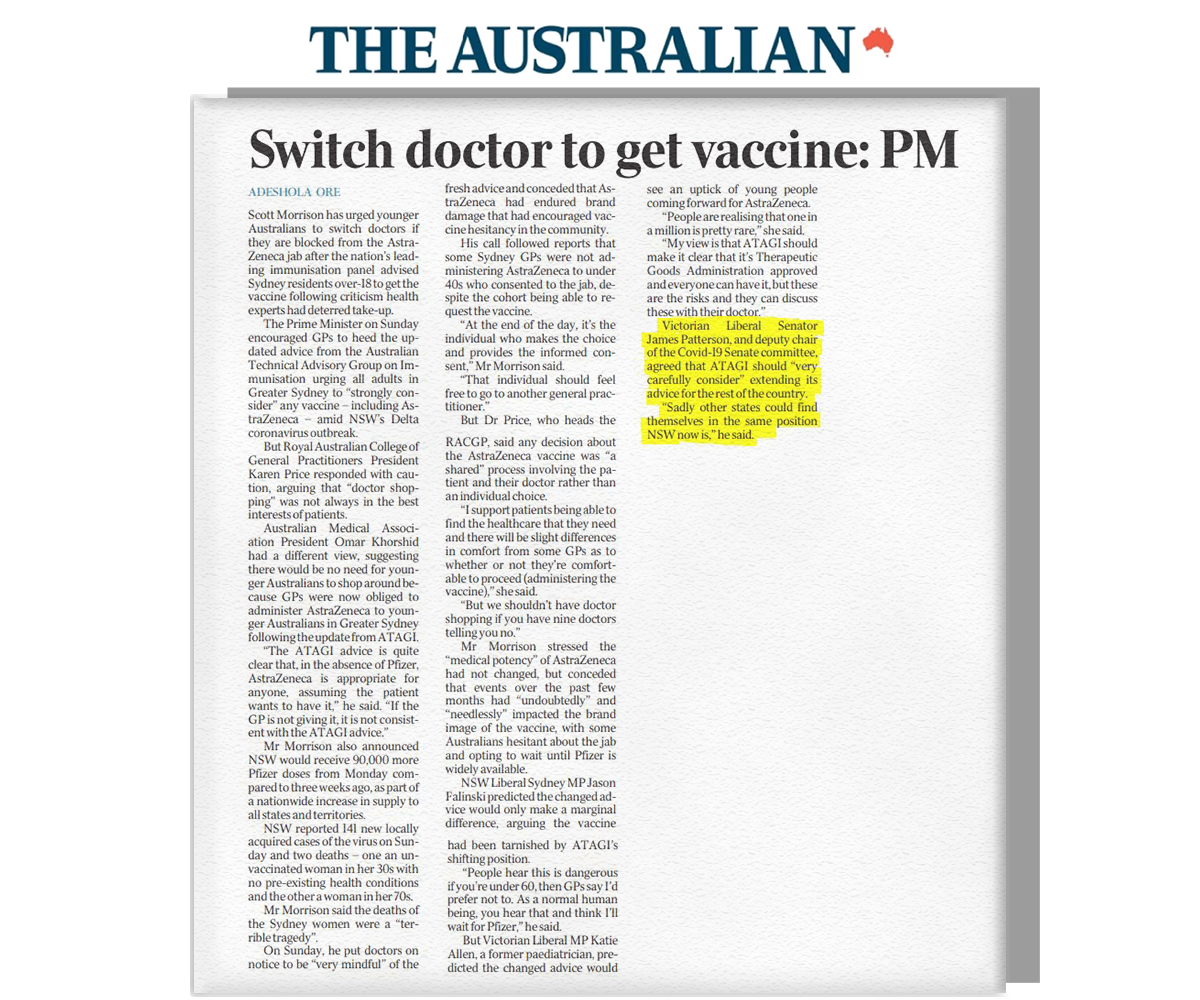 Scott Morrison has urged younger Australians to switch doctors if they are blocked from the Astra-Zeneca jab after the nation’s leading immunisation panel advised Sydney residents over-18 to get the vaccine following criticism health experts had deterred take-up.

The Prime Minister on Sunday encouraged GPs to heed the updated advice from the Australian Technical Advisory Group on Immunisation urging all adults in Greater Sydney to “strongly consider” any vaccine – including AstraZeneca – amid NSW’s Delta coronavirus outbreak.

But Royal Australian College of General Practitioners President Karen Price responded with caution, arguing that “doctor shopping” was not always in the best interests of patients.

Australian Medical Association President Omar Khorshid had a different view, suggesting there would be no need for younger Australians to shop around because GPs were now obliged to administer AstraZeneca to younger Australians in Greater Sydney following the update from ATAGI.

“The ATAGI advice is quite clear that, in the absence of Pfizer, AstraZeneca is appropriate for anyone, assuming the patient wants to have it,” he said. “If the GP is not giving it, it is not consistent with the ATAGI advice.”

Mr Morrison also announced NSW would receive 90,000 more Pfizer doses from Monday compared to three weeks ago, as part of a nationwide increase in supply to all states and territories.

NSW reported 141 new locally acquired cases of the virus on Sunday and two deaths – one an unvaccinated woman in her 30s with no pre-existing health conditions and the other a woman in her 70s.

Mr Morrison said the deaths of the Sydney women were a “terrible tragedy”.

On Sunday, he put doctors on notice to be “very mindful” of the fresh advice and conceded that AstraZeneca had endured brand damage that had encouraged vaccine hesitancy in the community.

His call followed reports that some Sydney GPs were not administering AstraZeneca to under 40s who consented to the jab, despite the cohort being able to request the vaccine.

“At the end of the day, it’s the individual who makes the choice and provides the informed consent,” Mr Morrison said.

“That individual should feel free to go to another general practitioner.”

But Dr Price, who heads the RACGP, said any decision about the AstraZeneca vaccine was “a shared” process involving the patient and their doctor rather than an individual choice.

“I support patients being able to find the healthcare that they need and there will be slight differences in comfort from some GPs as to whether or not they’re comfortable to proceed (administering the vaccine),” she said.

“But we shouldn’t have doctor shopping if you have nine doctors telling you no.”

Mr Morrison stressed the “medical potency” of AstraZeneca had not changed, but conceded that events over the past few months had “undoubtedly” and “needlessly” impacted the brand image of the vaccine, with some Australians hesitant about the jab and opting to wait until Pfizer is widely available.

NSW Liberal Sydney MP Jason Falinski predicted the changed advice would only make a marginal difference, arguing the vaccine had been tarnished by ATAGI’s shifting position.

“People hear this is dangerous if you’re under 60, then GPs say I’d prefer not to. As a normal human being, you hear that and think I’ll wait for Pfizer,” he said.

“People are realising that one in a million is pretty rare,” she said.

“My view is that ATAGI should make it clear that it’s Therapeutic Goods Administration approved and everyone can have it, but these are the risks and they can discuss these with their doctor.”

Victorian Liberal Senator James Paterson, and deputy chair of the Covid-19 Senate committee, agreed that ATAGI should “very carefully consider” extending its advice for the rest of the country.

“Sadly other states could find themselves in the same position NSW now is,” he said.