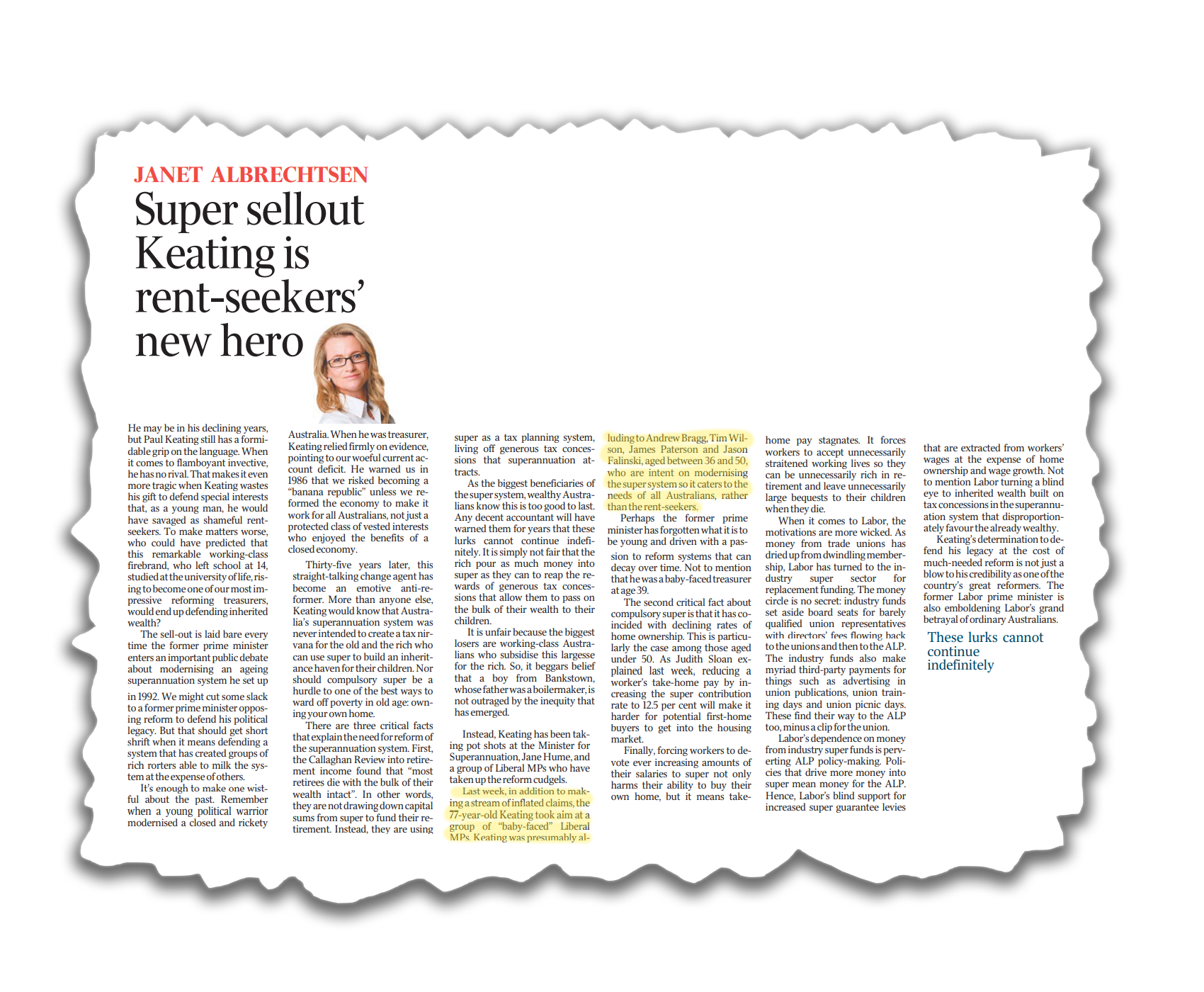 He may be in his declining years, but Paul Keating still has a formidable grip on the language. When it comes to flamboyant invective, he has no rival. That makes it even more tragic when Keating wastes his gift to defend special interests that, as a young man, he would have savaged as shameful rent-seekers. To make matters worse, who could have predicted that this remarkable working-class firebrand, who left school at 14, studied at the university of life, rising to become one of our most impressive reforming treasurers, would end up defending inherited wealth?

The sell-out is laid bare every time the former prime minister enters an important public debate about modernising an ageing superannuation system he set up in 1992. We might cut some slack to a former prime minister opposing reform to defend his political legacy. But that should get short shrift when it means defending a system that has created groups of rich rorters able to milk the system at the expense of others.

It’s enough to make one wistful about the past. Remember when a young political warrior modernised a closed and rickety Australia. When he was treasurer, Keating relied firmly on evidence, pointing to our woeful current account deficit. He warned us in 1986 that we risked becoming a “banana republic” unless we reformed the economy to make it work for all Australians, not just a protected class of vested interests who enjoyed the benefits of a closed economy.

Thirty-five years later, this straight-talking change agent has become an emotive anti-reformer. More than anyone else, Keating would know that Australia’s superannuation system was never intended to create a tax nirvana for the old and the rich who can use super to build an inheritance haven for their children. Nor should compulsory super be a hurdle to one of the best ways to ward off poverty in old age: owning your own home.

There are three critical facts that explain the need for reform of the superannuation system. First, the Callaghan Review into retirement income found that “most retirees die with the bulk of their wealth intact”. In other words, they are not drawing down capital to fund their retirement. Instead, they are using super as a tax planning system, living off generous tax concessions that superannuation attracts.

As the biggest beneficiaries of the super system, wealthy Australians know this is too good to last. Any decent accountant will have warned them for years that these lurks cannot continue indefinitely. It is simply not fair that the rich pour as much money into super as they can to reap the rewards of generous tax concessions that allow them to pass on the bulk of their wealth to their children.

It is unfair because the biggest losers are working-class Australians who subsidise this largesse for the rich. So, it beggars belief that a boy from Bankstown, whose father was a boilermaker, is not outraged by the inequity that has emerged.

Instead, Keating has been taking pot shots at the Minister for Superannuation, Jane Hume, and a group of Liberal MPs who have taken up the reform cudgels.

Last week, in addition to making a stream of inflated claims, the 77-year-old Keating took aim at a group of “baby-faced” Liberal MPs. Keating was presumably alluding to Andrew Bragg, Tim Wilson, James Paterson and Jason Falinski, aged between 36 and 50, who are intent on modernising the super system so it caters to the needs of all Australians, rather than the rent-seekers.

Perhaps the former prime minister has forgotten what it is to be young and driven with a passion to reform systems that can decay over time. Not to mention that he was a baby-faced treasurer at age 39.

The second critical fact about compulsory super is that it has coincided with declining rates of home ownership. This is particularly the case among those aged under 50. As Judith Sloan explained last week, reducing a worker’s take-home pay by increasing the super contribution rate to 12.5 per cent will make it harder for potential first-home buyers to get into the housing market.

Finally, forcing workers to devote ever increasing amounts of their salaries to super not only harms their ability to buy their own home, but it means take-home pay stagnates. It forces workers to accept unnecessarily straitened working lives so they can be unnecessarily rich in retirement and leave unnecessarily large bequests to their children when they die.

When it comes to Labor, the motivations are more wicked. As money from trade unions has dried up from dwindling membership, Labor has turned to the industry super sector for replacement funding. The money circle is no secret: industry funds set aside board seats for barely qualified union representatives with directors’ fees flowing back to the unions and then to the ALP. The industry funds also make myriad third-party payments for things such as advertising in union publications, union training days and union picnic days. These find their way to the ALP too, minus a clip for the union.

Labor’s dependence on money from industry super funds is perverting ALP policy-making. Policies that drive more money into super mean money for the ALP. Hence, Labor’s blind support for increased super guarantee levies that are extracted from workers’ wages at the expense of home ownership and wage growth. Not to mention Labor turning a blind eye to inherited wealth built on tax concessions in the superannuation system that disproportionately favour the already wealthy.

Keating’s determination to defend his legacy at the cost of much-needed reform is not just a blow to his credibility as one of the country’s great reformers. The former Labor prime minister is also emboldening Labor’s grand betrayal of ordinary Australians.