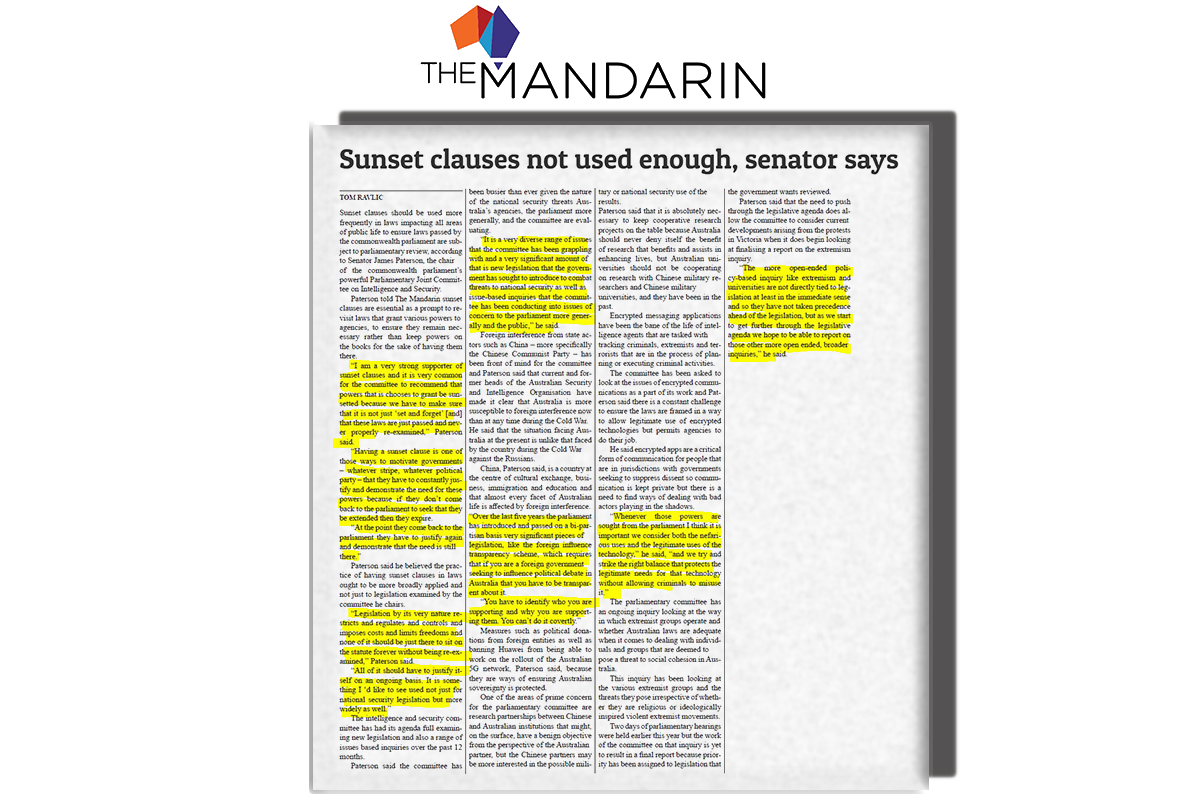 Paterson told The Mandarin sunset clauses are essential as a prompt to revisit laws that grant various powers to agencies, to ensure they remain necessary rather than keep powers on the books for the sake of having them there.

“I am a very strong supporter of sunset clauses and it is very common for the committee to recommend that powers that is chooses to grant be sunsetted because we have to make sure that it is not just ‘set and forget’ [and] that these laws are just passed and never properly re-examined,” Paterson said.

“Having a sunset clause is one of those ways to motivate governments – whatever stripe, whatever political party – that they have to constantly justify and demonstrate the need for these powers because if they don’t come back to the parliament to seek that they be extended then they expire.

“At the point they come back to the parliament they have to justify again and demonstrate that the need is still there.”

Paterson said he believed the practice of having sunset clauses in laws ought to be more broadly applied and not just to legislation examined by the committee he chairs.

“Legislation by its very nature restricts and regulates and controls and imposes costs and limits freedoms and none of it should be just there to sit on the statute forever without being re-examined,” Paterson said.

“All of it should have to justify itself on an ongoing basis. It is something I ‘d like to see used not just for national security legislation but more widely as well.”

The intelligence and security committee has had its agenda full examining new legislation and also a range of issues based inquiries over the past 12 months.

Paterson said the committee has been busier than ever given the nature of the national security threats Australia’s agencies, the parliament more generally, and the committee are evaluating.

Foreign interference from state actors such as China – more specifically the Chinese Communist Party – has been front of mind for the committee and Paterson said that current and former heads of the Australian Security and Intelligence Organisation have made it clear that Australia is more susceptible to foreign interference now than at any time during the Cold War.

He said that the situation facing Australia at the present is unlike that faced by the country during the Cold War against the Russians.

China, Paterson said, is a country at the centre of cultural exchange, business, immigration and education and that almost every facet of Australian life is affected by foreign interference.

“Over the last five years the parliament has introduced and passed on a bi-partisan basis very significant pieces of legislation, like the foreign influence transparency scheme, which requires that if you are a foreign government seeking to influence political debate in Australia that you have to be transparent about it.

Measures such as political donations from foreign entities as well as banning Huawei from being able to work on the rollout of the Australian 5G network, Paterson said, because they are ways of ensuring Australian sovereignty is protected.

One of the areas of prime concern for the parliamentary committee are research partnerships between Chinese and Australian institutions that might, on the surface, have a benign objective from the perspective of the Australian partner, but the Chinese partners may be more interested in the possible military or national security use of the results.

Paterson said that it is absolutely necessary to keep cooperative research projects on the table because Australia should never deny itself the benefit of research that benefits and assists in enhancing lives, but Australian universities should not be cooperating on research with Chinese military researchers and Chinese military universities, and they have been in the past.

Encrypted messaging applications have been the bane of the life of intelligence agents that are tasked with tracking criminals, extremists and terrorists that are in the process of planning or executing criminal activities.