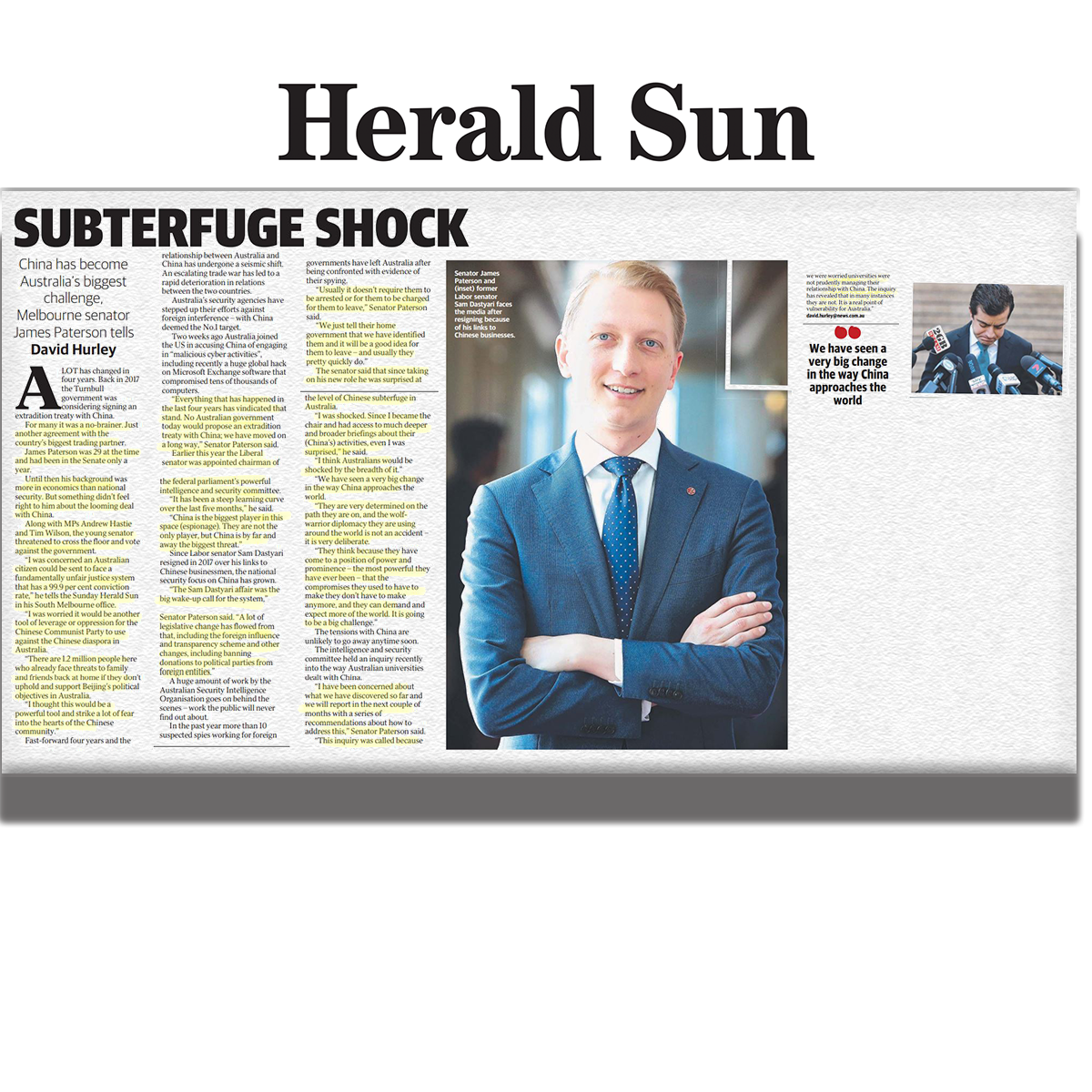 A lot has changed in four years. Back in 2017 the Turnbull government was considering signing an extradition treaty with China.

For many it was a no-brainer. Just another agreement with the country’s biggest trading partner.

James Paterson was 29 at the time and had been in the Senate only a year.

Until then his background was more in economics than national security. But something didn’t feel right to him about the looming deal with China.

Along with MPs Andrew Hastie and Tim Wilson, the young senator threatened to cross the floor and vote against the government.

“I was concerned an Australian citizen could be sent to face a fundamentally unfair justice system that has a 99.9 per cent conviction rate,” he tells the Sunday Herald Sun in his South Melbourne office.

“I was worried it would be another tool of leverage or oppression for the Chinese Communist Party to use against the Chinese diaspora in Australia.

“There are 1.2 million people here who already face threats to family and friends back at home if they don’t uphold and support Beijing’s political objectives in Australia.

“I thought this would be a powerful tool and strike a lot of fear into the hearts of the Chinese community.”

Fast-forward four years and the relationship between Australia and China has undergone a seismic shift. An escalating trade war has led to a rapid deterioration in relations between the two countries.

Australia’s security agencies have stepped up their efforts against foreign interference – with China deemed the No. 1 target.

Two weeks ago Australia joined the US in accusing China of engaging in “malicious cyber activities”, including recently a huge global hack on Microsoft Exchange software that compromised tens of thousands of computers.

“Everything that has happened in the last four years has vindicated that stand. No Australian government today would propose an extradition treaty with China; we have moved on a long way,” Senator Paterson said.

Earlier this year the Liberal senator was appointed chairman of the federal parliament’s powerful intelligence and security committee.

“It has been a steep learning curve over the last five months,” he said.

“China is the biggest player in this space (espionage). They are not the only player, but China is by far and away the biggest threat.”

Since Labor senator Sam Dastyari resigned in 2017 over his links to Chinese businessmen, the national security focus on China has grown.

“The Sam Dastyari affair was the big wake-up call for the system,” Senator Paterson said. “A lot of legislative change has flowed from that, including the foreign influence and transparency scheme and other changes, including banning donations to political parties from foreign entities.”

A huge amount of work by the Australian Security Intelligence Organisation goes on behind the scenes – work the public will never find out about.

In the past year more than 10 suspected spies working for foreign governments have left Australia after being confronted with evidence of their spying.

“We just tell their home government that we have identified them and it will be a good idea for them to leave – and usually they pretty quickly do.”

The senator said that since taking on his new role he was surprised at the level of Chinese subterfuge in Australia.

“I was shocked. Since I became the chair and had access to much deeper and broader briefings about their (China’s) activities, even I was surprised,” he said.

“I think Australians would be shocked by the breadth of it.”

“We have seen a very big change in the way China approaches the world.

“They are very determined on the path they are on, and the wolf-warrior diplomacy they are using around the world is not an accident – it is very deliberate.

“They think because they have come to a position of power and prominence – the most powerful they have ever been – that the compromises they used to have to make they don’t have to make anymore, and they can demand and expect more of the world. It is going to be a big challenge.”

The tensions with China are unlikely to go away anytime soon.

The intelligence and security committee held an inquiry recently into the way Australian universities dealt with China.

“I have been concerned about what we have discovered so far and we will report in the next couple of months with a series of recommendations about how to address this,” Senator Paterson said.

“This inquiry was called because we were worried universities were not prudently managing their relationship with China. The inquiry has revealed that in many instances they are not. It is a real point of vulnerability for Australia.”