Special forces 'back to business' after tough year: Hastie 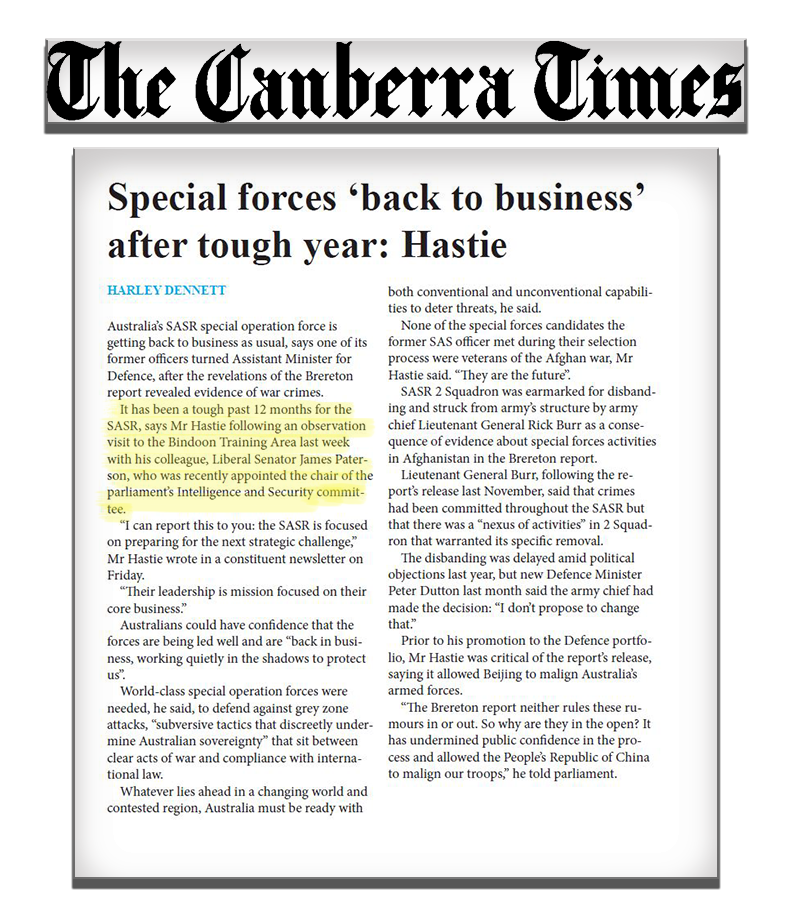 Australia's SASR special operation force is getting back to business as usual, says one of its former officers turned Assistant Minister for Defence, after the revelations of the Brereton report revealed evidence of war crimes.

It has been a tough past 12 months for the SASR, says Mr Hastie following an observation visit to the Bindoon Training Area last week with his colleague, Liberal Senator James Paterson, who was recently appointed the chair of the parliament's Intelligence and Security committee.

"I can report this to you: the SASR is focused on preparing for the next strategic challenge," Mr Hastie wrote in a constituent newsletter on Friday.

"Their leadership is mission focused on their core business."

Australians could have confidence that the forces are being led well and are "back in business, working quietly in the shadows to protect us".

World-class special operation forces were needed, he said, to defend against grey zone attacks, "subversive tactics that discreetly undermine Australian sovereignty" that sit between clear acts of war and compliance with international law.

Whatever lies ahead in a changing world and contested region, Australia must be ready with both conventional and unconventional capabilities to deter threats, he said.

None of the special forces candidates the former SAS officer met during their selection process were veterans of the Afghan war, Mr Hastie said. "They are the future".

SASR 2 Squadron was earmarked for disbanding and struck from army's structure by army chief Lieutenant General Rick Burr as a consequence of evidence about special forces activities in Afghanistan in the Brereton report.

Lieutenant General Burr, following the report's release last November, said that crimes had been committed throughout the SASR but that there was a "nexus of activities" in 2 Squadron that warranted its specific removal.

The disbanding was delayed amid political objections last year, but new Defence Minister Peter Dutton last month said the army chief had made the decision: "I don't propose to change that."

Prior to his promotion to the Defence portfolio, Mr Hastie was critical of the report's release, saying it allowed Beijing to malign Australia's armed forces.

"The Brereton report neither rules these rumours in or out. So why are they in the open? It has undermined public confidence in the process and allowed the People's Republic of China to malign our troops," he told parliament.