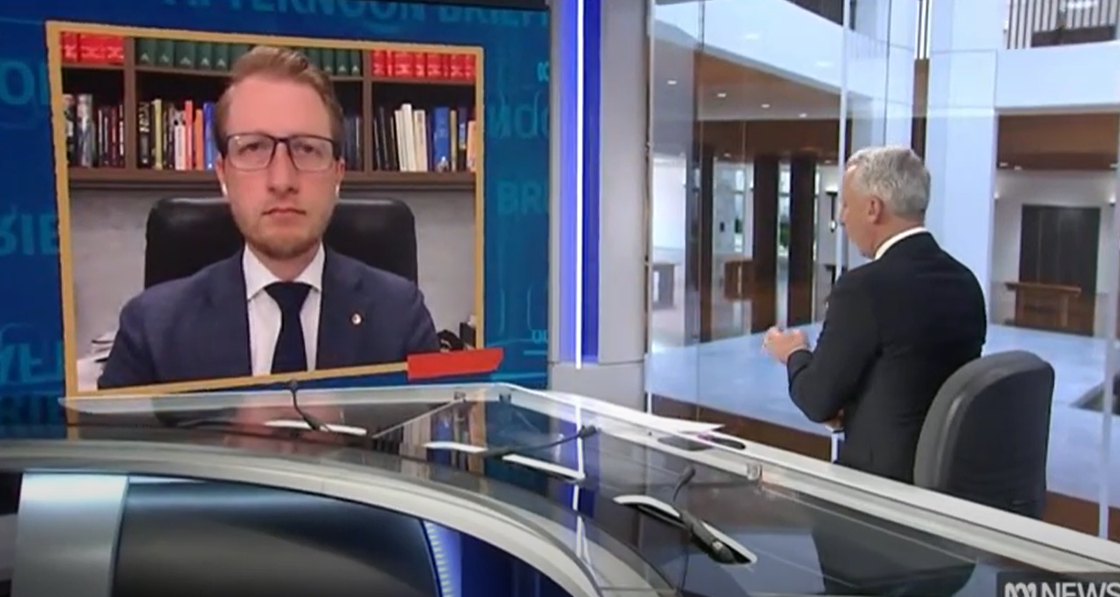 GREG JENNETT: But we did catch up on this question with Liberal Senator James Paterson, who's Chair of Parliament's powerful Joint Committee on Intelligence and Security. He joined us a short time ago from Melbourne. James Paterson, welcome to Afternoon Briefing, excepting right off the bat that there are constraints on what Intelligence Committee members are told in Canberra, can I put the question, when did you first become aware that the Sogavare Government had negotiated at least a draft security agreement with China?

SENATOR JAMES PATERSON: Like the Ministers in the Government who have answered this question, I was aware when it was publicly revealed. But what I was aware of prior to that and what our intelligence community has exceptionally good coverage of is China's plans and intentions for the region. We've known for some time that is the ambition of China to expand its presence in the region and that it has been trying with a number of governments to have these sorts of agreements in place. So it didn't come as a surprise to anyone that China was seeking to do this. But we did learn about the agreement itself when it became public.

JENNETT: Ok, so if China had an intent and the agencies whose job it is to know these things knew that much. Why, then, should the public rely on the media to find out that it had actually gone as far was as far advanced as a draft document?

SENATOR PATERSON: One of the challenges we face in the region is that some of our potential adversaries and rivals, China included, don't operate on the same rules as we do. They are comfortable doing things which we are not comfortable doing as a rule of law, liberal democracy and one of those things that they are comfortable doing is negotiating things in secret and not providing the normal and necessary transparency on bilateral and international relations. So when we enter into these sorts of partnerships, we publicly declare that we are doing so. We publicly put on a register any treaties we enter into. We're utterly transparent about that, and our motives are clear. China does not behave that way, and so they went to some lengths to keep this arrangement a secret. And that's the reality of the way they behave.

JENNETT: Could we reasonably expect that our relevant agencies would have today as we speak some understanding about the contents of this agreement and just how far reaching it is.

SENATOR PATERSON: We have a pretty good idea from the draft agreement what China's intentions were and what they were seeking. And we also have commitments made by Prime Minister Sogavare, not just to other partners like us and to the region and to his neighbours, but to the people of the Solomon Islands about what this agreement will do and what it won't do. And some of those very important assurances he's provided is that it won't result in a military facility, a Chinese military facility on Solomons soil. And we welcome that and we look forward to that commitment being adhered to. And I know that we're not the only ones who have that expectation.

GREG JENNETT: Why do you believe it or expect it to be true, though, because there's great ambiguity in these things between what might be a military base and what might be a logistics hub? Why, in essence, would you take Prime Minister Sogavare at his word?

SENATOR PATERSON: Well, we take the commitments that our allies and friends and partners in the region make very seriously, and that's a commitment that he's made to us both directly and also publicly. But it's not just a commitment to us, it's a commitment of the people in the Solomon Islands who I don't think would welcome a Chinese military presence on a permanent basis on their own territory. And he will have to face elections like all politicians do, and he's made that commitment to them, not just to us as well to other islands in the Pacific who are watching this very closely and anxiously.

GREG JENNETT: All right. Military base or no military base? What's your own assessment of the strategic threat that the agreement we know about poses? Is it a game changer?

SENATOR PATERSON: There's no doubt. It's very a very serious challenge to our regional security and it is an unwelcome development. We've been very candid about that, but we also need to be calm about it and keep it in perspective. We have very good relationships with the region. We have very good relationships with the Solomons. We remain the security partner of choice for the Pacific, and we are the country which is first called upon when there are domestic disturbances or other incidents as and assistance is required. And we have very happily and very quickly provided that. And all of our partners know in the region that we are a reliable partner, that we operate in an open and transparent way and not every other country, China especially, can make that same claim.

GREG JENNETT: I want to bring you to the intersection of this foreign policy debate and domestic politics in just one moment. But just finally looking out across the Pacific, some analysts are predicting that the Chinese Communist Party might seek to bring some operational function to this agreement even in the life of our current election campaign underway herein Australia, perhaps a cargo plane landing with a few pallets on board. Does that seem likely in your own assessment?

SENATOR PATERSON: It's certainly possible. It's certainly been their modus operandi in the past when equivalent agreements have been reached that they seek to, as you say, operationalise them quite quickly. We would ask that if they do so, that it done be transparently and openly and apart of that being transparent and open is the agreement itself and the guardrails that might be in it becoming transparent and public as well.

GREG JENNETT: Ok, now on the timing, do you view it as significant that it was signed and the Beijing broke news about it initially smack bang in the middle of the election campaign here?

SENATOR PATERSON: It's very difficult to put ourselves in the minds of Beijing and what they are seeking to do, except that we know that they have had ambitions like these for some time and that they have made approaches to other governments in the region and sought to establish equivalent arrangements with other countries in the past. And I'm sure they will take whatever opportunities are presented to them, and it is up to the governments of the Pacific to decide whether or not it is in their best interests in their own national interest.

GREG JENNETT: One by-product of all of this for China. This opportunity, as you describe it, James Paterson, might be to seek to divide the traditional bipartisanship of Australian politics on foreign policy. Hasn't that actually worked when you consider Scott Morrison saying the Labor Party has joined the chorus of other countries attacking Australia? Have they? The Labor Party backed the Australian government in standing up for Australia or have they run other countries talking points? Isn't that threatening bipartisanship?

SENATOR PATERSON: Greg, when in the past the Liberal Party has attacked the Opposition over its standing on national security, we have been rounded upon, including by the Press Gallery in Canberra, and told that we are breaching an unwritten convention or an unwritten rule that national security and foreign policy shouldn't be made partisan. But when the Labor Party attacks us over it, I don't see the same enforcement of that so-called convention.

I'm very disappointed by the way in which the Opposition Leader and the Shadow Foreign Affairs Minister have responded to this. They have sought to politicise this. They have sought to gain advantage of it, and that is actually consistent with what they've done over a long period of time. They've sought previously to blame the Australian Government for the breakdown in the relationship with China. Even when they're economically coercing us, they attacked us over our call for an independent inquiry into COVID origins. They attacked us when we secured the AUKUS agreement because of the upset feelings of the French government. They have sought for a long time to gain political advantage over it. But now that we're an election campaign, they've sought the protection of bipartisanship to shield any scrutiny of their own record. And I think that's inappropriate. And when it comes to the Opposition, I don't know whether Anthony Albanese or Penny Wong have been briefed on the sensitive national Security elements of these arrangements. If they have been...

GREG JENNETT: Should they be?

SENATOR PATERSON: Well, if they have been, I think they are irresponsibly, publicly canvassing very sensitive matters. And if they have not been, then they are without being informed, publicly canvassing these matters. Neither of those reflect on them well, and I think they should really reconsider it. Anthony Albanese said today that one of the things he would do if he was Prime Minister was to show up and be present in the Pacific. But he hasn't made an official visit to the Pacific in the last decade. The only time on an official visit that Penny Wong has visited in recent years was four years ago, and that was when it was facilitated by our government. So it's very easy for them to say they would show up. But if you look at their record, they haven't done so well.

GREG JENNETT: Alright. Well, I'm sure this has a way to run yet, but James Paterson for sharing your views, thanks for joining us on Afternoon Briefing today.