Should ASIC be led by a lawyer or by an economist? 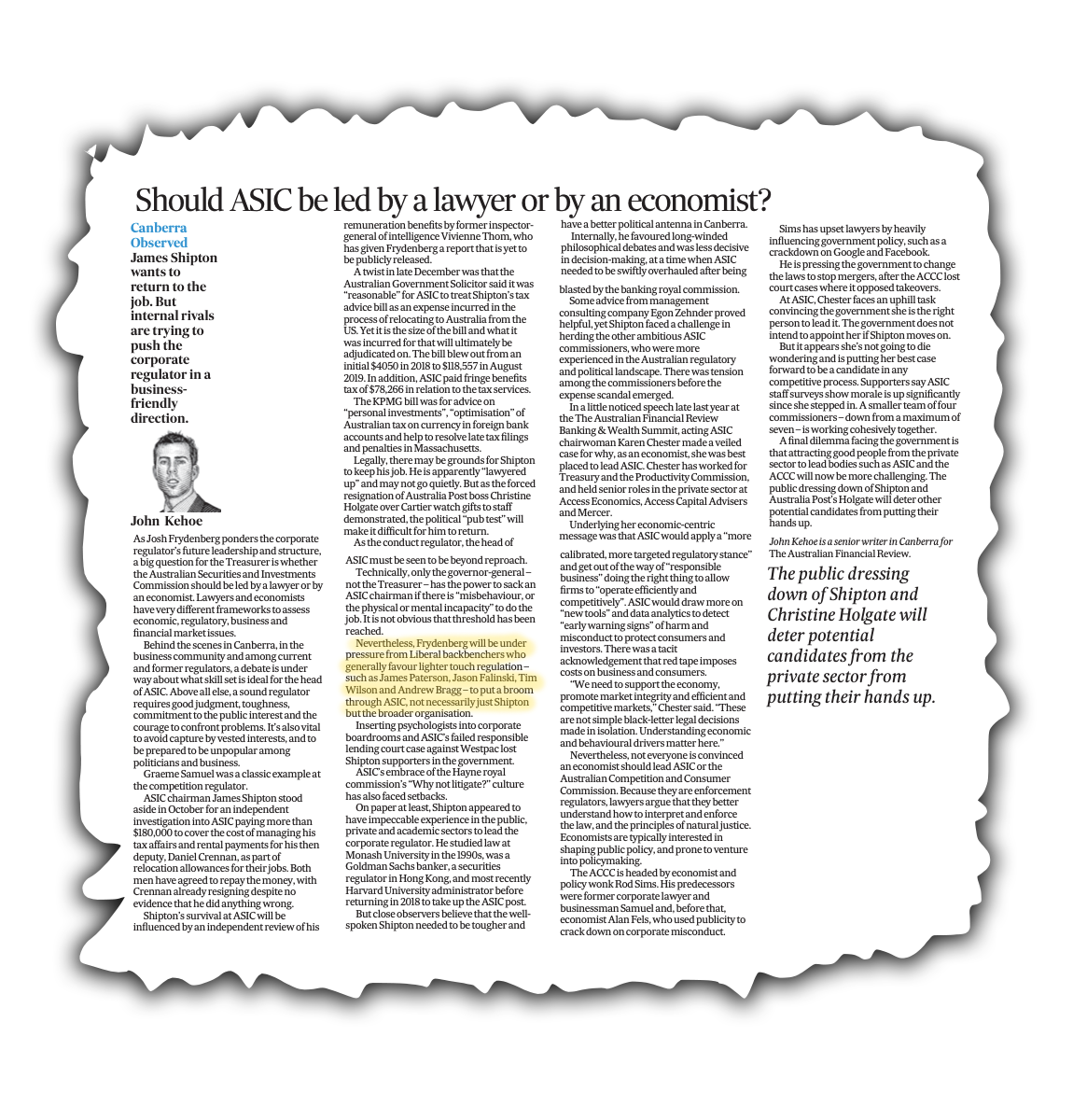 As Josh Frydenberg ponders the corporate regulator's future leadership personnel and structure, a big question hanging over the Treasurer is whether a lawyer or an economist should lead the Australian Securities and Investments Commission.Lawyers and economists have very different frameworks to assess economic, regulatory, business and financial market issues.

Behind the scenes in Canberra, in the business community and among current and former regulators, a debate is under way about what skill set is best placed to head ASIC.

Above all else, a sound regulator requires good judgment, toughness, commitment to act in the public interest, courage to confront problems, avoidance of capture by vested interests and preparedness to be unpopular among politicians and business.Graeme Samuel was a classic example at the competition regulator.ASIC chairman James Shipton stood aside in October for an independent investigation into ASIC paying more than $180,000 to cover the cost of managing his tax affairs and rental payments for his then deputy, Daniel Crennan, as part of relocation allowances for their jobs.Both men have agreed to repay the money, with Crennan already resigning despite no evidence that he did anything wrong.

Whether Shipton manages to survive as ASIC chairman will be influenced by an independent review of his remuneration benefits by the former inspector-general of intelligence, Vivienne Thom, who has given Frydenberg a yet-to-be-publicly-released report.

A twist in late December was that the Australian Government Solicitor had retrospectively said it was "reasonable" for ASIC to treat Shipton's tax advice bill as an expense incurred in the process of relocating to Australia from the United States.Yet it is the size of the adviser's bill, an astonishing $118,557, and what it was incurred for that will ultimately be adjudicated on.The slated bill blew out from an initial $4050 in 2018, to $9500, to between $60,000 and $70,000, to ultimately $118,557 in August 2019. In addition, ASIC paid fringe benefits tax of $78,266 in relation to the tax services.The KPMG bill was for advice on "personal investments", "optimisation" of Australian tax on currency in foreign bank accounts and help to resolve late tax filings and penalties in the US state of Massachusetts.Legally, there may be grounds for Shipton to keep his job. He is apparently "lawyered up" and may not go quietly.But as the forced resignation of Australia Post boss Christine Holgate over Cartier watch gifts to staff demonstrated, the political "pub test" will make it difficult for him to return.As the conduct regulator, the head of ASIC must be seen to be beyond reproach.Technically, only the Governor-General – not the Treasurer – has the power to sack an ASIC chairman if there is "misbehaviour, or the physical or mental incapacity" to do the job.It is not obvious that threshold has been reached.Nevertheless, Frydenberg will be under pressure from Liberal backbenchers who generally favour lighter touch regulation, such as James Paterson, Jason Falinski, Tim Wilson and Andrew Bragg, to put a broom through ASIC – not necessarily just Shipton but the broader organisation.Inserting psychologists into corporate boardrooms and ASIC's failed responsible lending court case against Westpac lost Shipton supporters in the government.ASIC's embrace of the Hayne royal commission's "Why not litigate?" culture has also faced setbacks. ASIC has learnt that using the courts is long, expensive and can end in losses.On paper at least, Shipton appeared to have impeccable experience in the public, private and academic sectors to lead the corporate regulator.Shipton studied law at Monash University in the 1990s, was a Goldman Sachs banker, a securities regulator in Hong Kong and most recently Harvard University administrator before arriving back in Australia in 2018 to become ASIC chairman.But close observers believe that the well-spoken Shipton needed to be tougher and have a better political antenna in Canberra.

Internally, he favoured long-winded philosophical and intellectual debates and was less decisive in decision-making, at a time when ASIC needed to be swiftly overhauled after being blasted by the banking royal commission.Some advice to him by management consulting company Egon Zehnder pre-COVID-19 had helped him somewhat.Yet Shipton had a challenge herding the other ambitious ASIC commissioners who were more experienced in the Australian regulatory and political landscape.There was tension among ASIC's commissioners before the expense scandal emerged.In a little noticed speech ("Getting on with it") late last year at the AFR Banking & Wealth Summit, acting ASIC chairwoman Karen Chester made a veiled case for why, as an economist, she was best placed to lead ASIC.Chester has worked for Treasury, the Productivity Commission and held senior roles in the private sector at Access Economics, Access Capital Advisers and Mercer.Underlying her economic-centric message was that ASIC would apply a "more calibrated, more targeted regulatory stance" and get out of the way of "responsible business" doing the right thing to allow firms to "operate efficiently and competitively".ASIC would draw more on "new tools" and data analytics to detect "early warning signs" of harm and misconduct to protect consumers and investors.There was an underlying acknowledgement that red tape imposes costs on business and, ultimately, consumers."We need to support the economy, promote market integrity and efficient and competitive markets," she said."These are not simple black-letter legal decisions made in isolation. Understanding economic and behavioural drivers matter here."Nevertheless, not everyone is convinced an economist should lead ASIC, or the Australian Competition and Consumer Commission.Because they are enforcement regulators, lawyers argue that they better understand interpreting and enforcing the law and the principles of natural justice.Economists are typically interested in shaping public policy, which makes them prone to venturing into policymaking.The ACCC is currently headed by economist and policy wonk Rod Sims. His predecessors were former corporate lawyer and businessman Samuel and, before that, economist Alan Fels, who used huge media publicity to crack down on corporate misconduct.Sims has upset lawyers by heavily influencing government policy, such as a crackdown on big technology platforms Google and Facebook.He is pressing the government to change the laws to stop mergers, after the ACCC lost several major court cases where it opposed takeovers, including TPG Telecom-Vodafone Hutchison, Pacific National-Aurizon and AGL Energy-Macquarie Generation.At ASIC, Chester faces an uphill task convincing the government she is the right person to lead it.The government does not intend to appoint her if Shipton moves on.But it appears she's not going to die wondering and is putting her best case forward to be a candidate in any competitive process. Supporters say ASIC staff surveys show morale is up significantly since the transition from Shipton to Chester as acting chairwoman.The smaller team of four commissioners – down from a maximum of seven – is working cohesively together.Labor would be nervous about Chester heading ASIC because at the Productivity Commission and now at ASIC she has been instrumental in a government crackdown on the $3 trillion superannuation industry.A final dilemma facing the government is that attracting good people from the private sector to lead bodies such as ASIC and the ACCC will be more challenging.The public dressing down of Shipton and Australia Post's Holgate will deter other potential candidates putting their hands up.