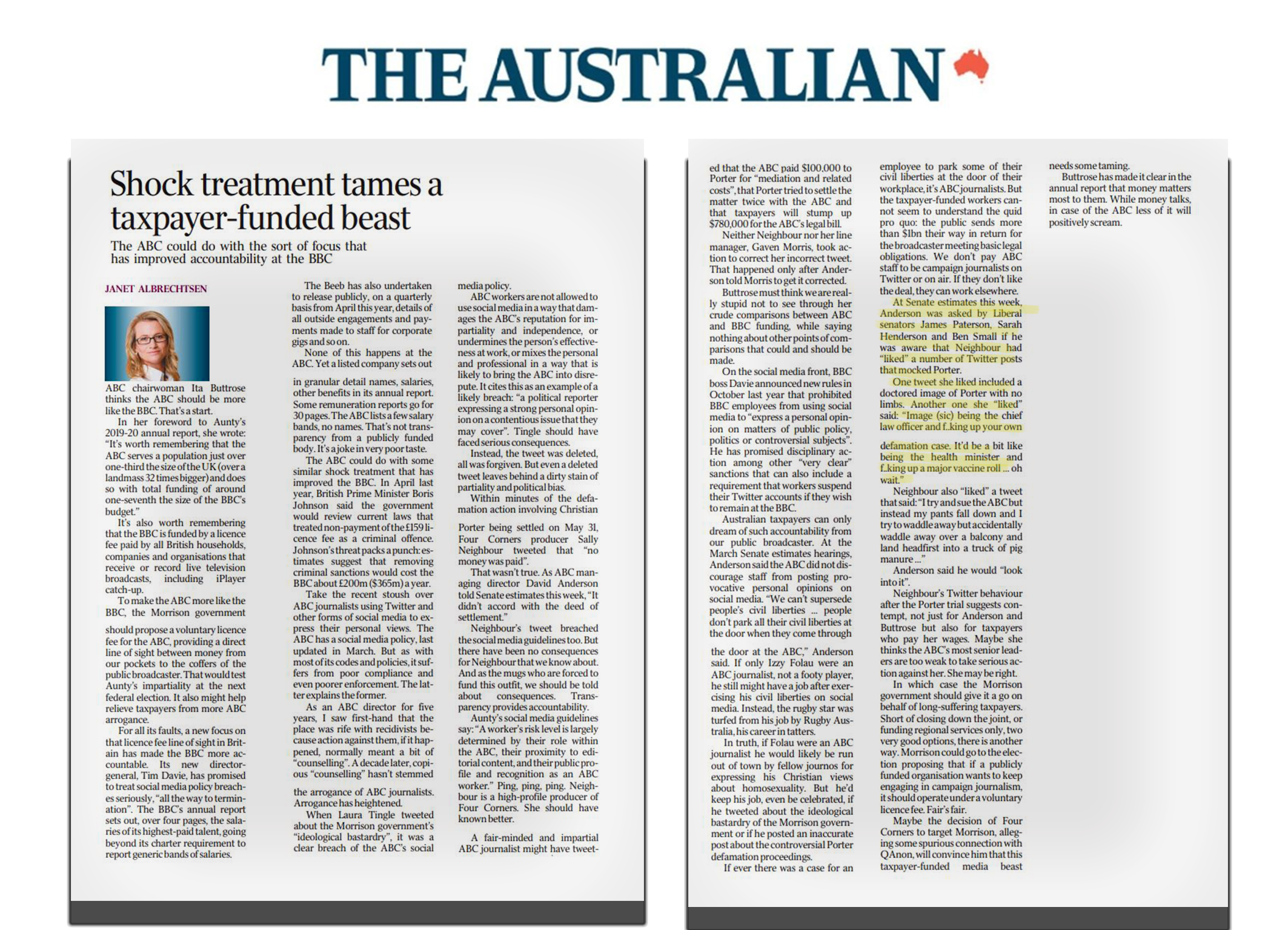 ABC chairwoman Ita Buttrose thinks the ABC should be more like the BBC. That’s a start.

In her foreword to Aunty’s 2019-20 annual report, she wrote: “It’s worth remembering that the ABC serves a population just over one-third the size of the UK (over a landmass 32 times bigger) and does so with total funding of around one-seventh the size of the BBC’s budget.”

It’s also worth remembering that the BBC is funded by a licence fee paid by all British households, companies and organisations that receive or record live television broadcasts, including iPlayer catch-up.

To make the ABC more like the BBC, the Morrison government should propose a voluntary licence fee for the ABC, providing a direct line of sight between money from our pockets to the coffers of the public broadcaster. That would test Aunty’s impartiality at the next federal election. It also might help relieve taxpayers from more ABC arrogance.

For all its faults, a new focus on that licence fee line of sight in Britain has made the BBC more accountable. Its new director-general, Tim Davie, has promised to treat social media policy breaches seriously, “all the way to termination”. The BBC’s annual report sets out, over four pages, the salaries of its highest-paid talent, going beyond its charter requirement to report generic bands of salaries.

The Beeb has also undertaken to release publicly, on a quarterly basis from April this year, details of all outside engagements and payments made to staff for corporate gigs and so on.

None of this happens at the ABC. Yet a listed company sets out in granular detail names, salaries, other benefits in its annual report. Some remuneration reports go for 30 pages. The ABC lists a few salary bands, no names. That’s not transparency from a publicly funded body. It’s a joke in very poor taste.

The ABC could do with some similar shock treatment that has improved the BBC. In April last year, British Prime Minister Boris Johnson said the government would review current laws that treated non-payment of the £159 licence fee as a criminal offence. Johnson’s threat packs a punch: estimates suggest that removing criminal sanctions would cost the BBC about £200m ($365m) a year.

Take the recent stoush over ABC journalists using Twitter and other forms of social media to express their personal views. The ABC has a social media policy, last updated in March. But as with most of its codes and policies, it suffers from poor compliance and even poorer enforcement. The latter explains the former.

As an ABC director for five years, I saw first-hand that the place was rife with recidivists because action against them, if it happened, normally meant a bit of “counselling”. A decade later, copious “counselling” hasn’t stemmed the arrogance of ABC journalists. Arrogance has heightened.

When Laura Tingle tweeted about the Morrison government’s “ideological bastardry”, it was a clear breach of the ABC’s social media policy.

ABC workers are not allowed to use social media in a way that damages the ABC’s reputation for impartiality and independence, or undermines the person’s effectiveness at work, or mixes the personal and professional in a way that is likely to bring the ABC into disrepute. It cites this as an example of a likely breach: “a political reporter expressing a strong personal opinion on a contentious issue that they may cover”. Tingle should have faced serious consequences.

Instead, the tweet was deleted, all was forgiven. But even a deleted tweet leaves behind a dirty stain of partiality and political bias.

Within minutes of the defamation action involving Christian Porter being settled on May 31, Four Corners producer Sally Neighbour tweeted that “no money was paid”.

That wasn’t true. As ABC managing director David Anderson told Senate estimates this week, “It didn’t accord with the deed of settlement.”

Neighbour’s tweet breached the social media guidelines too. But there have been no consequences for Neighbour that we know about. And as the mugs who are forced to fund this outfit, we should be told about consequences. Transparency provides accountability.

Aunty’s social media guidelines say: “A worker’s risk level is largely determined by their role within the ABC, their proximity to editorial content, and their public profile and recognition as an ABC worker.” Ping, ping, ping. Neighbour is a high-profile producer of Four Corners. She should have known better.

A fair-minded and impartial ABC journalist might have tweeted that the ABC paid $100,000 to Porter for “mediation and related costs”, that Porter tried to settle the matter twice with the ABC and that taxpayers will stump up $780,000 for the ABC’s legal bill.

Neither Neighbour nor her line manager, Gaven Morris, took action to correct her incorrect tweet. That happened only after Anderson told Morris to get it corrected.

Buttrose must think we are really stupid not to see through her crude comparisons between ABC and BBC funding, while saying nothing about other points of comparisons that could and should be made.

On the social media front, BBC boss Davie announced new rules in October last year that prohibited BBC employees from using social media to “express a personal opinion on matters of public policy, politics or controversial subjects”. He has promised disciplinary action among other “very clear” sanctions that can also include a requirement that workers suspend their Twitter accounts if they wish to remain at the BBC.

Australian taxpayers can only dream of such accountability from our public broadcaster. At the March Senate estimates hearings, Anderson said the ABC did not discourage staff from posting provocative personal opinions on social media. “We can’t supersede people’s civil liberties … people don’t park all their civil liberties at the door when they come through the door at the ABC,” Anderson said. If only Izzy Folau were an ABC journalist, not a footy player, he still might have a job after exercising his civil liberties on social media. Instead, the rugby star was turfed from his job by Rugby Australia, his career in tatters.

In truth, if Folau were an ABC journalist he would likely be run out of town by fellow journos for expressing his Christian views about homosexuality. But he’d keep his job, even be celebrated, if he tweeted about the ideological bastardry of the Morrison government or if he posted an inaccurate post about the controversial Porter defamation proceedings.

If ever there was a case for an employee to park some of their civil liberties at the door of their workplace, it’s ABC journalists. But the taxpayer-funded workers cannot seem to understand the quid pro quo: the public sends more than $1bn their way in return for the broadcaster meeting basic legal obligations. We don’t pay ABC staff to be campaign journalists on Twitter or on air. If they don’t like the deal, they can work elsewhere.

At Senate estimates this week, Anderson was asked by Liberal senators James Paterson, Sarah Henderson and Ben Small if he was aware that Neighbour had “liked” a number of Twitter posts that mocked Porter.

One tweet she liked included a doctored image of Porter with no limbs. Another one she “liked” said: “Image (sic) being the chief law officer and f..king up your own defamation case. It’d be a bit like being the health minister and f..king up a major vaccine roll … oh wait.”

Neighbour also “liked” a tweet that said: “I try and sue the ABC but instead my pants fall down and I try to waddle away but accidentally waddle away over a balcony and land headfirst into a truck of pig manure …”

Anderson said he would “look into it”.

Neighbour’s Twitter behaviour after the Porter trial suggests contempt, not just for Anderson and Buttrose but also for taxpayers who pay her wages. Maybe she thinks the ABC’s most senior leaders are too weak to take serious action against her. She may be right.

In which case the Morrison government should give it a go on behalf of long-suffering taxpayers. Short of closing down the joint, or funding regional services only, two very good options, there is another way. Morrison could go to the election proposing that if a publicly funded organisation wants to keep engaging in campaign journalism, it should operate under a voluntary licence fee. Fair’s fair.

Maybe the decision of Four Corners to target Morrison, alleging some spurious connection with QAnon, will convince him that this taxpayer-funded media beast needs some taming.

Buttrose has made it clear in the annual report that money matters most to them. While money talks, in case of the ABC less of it will positively scream.