Safeguard our campuses from foreign meddling 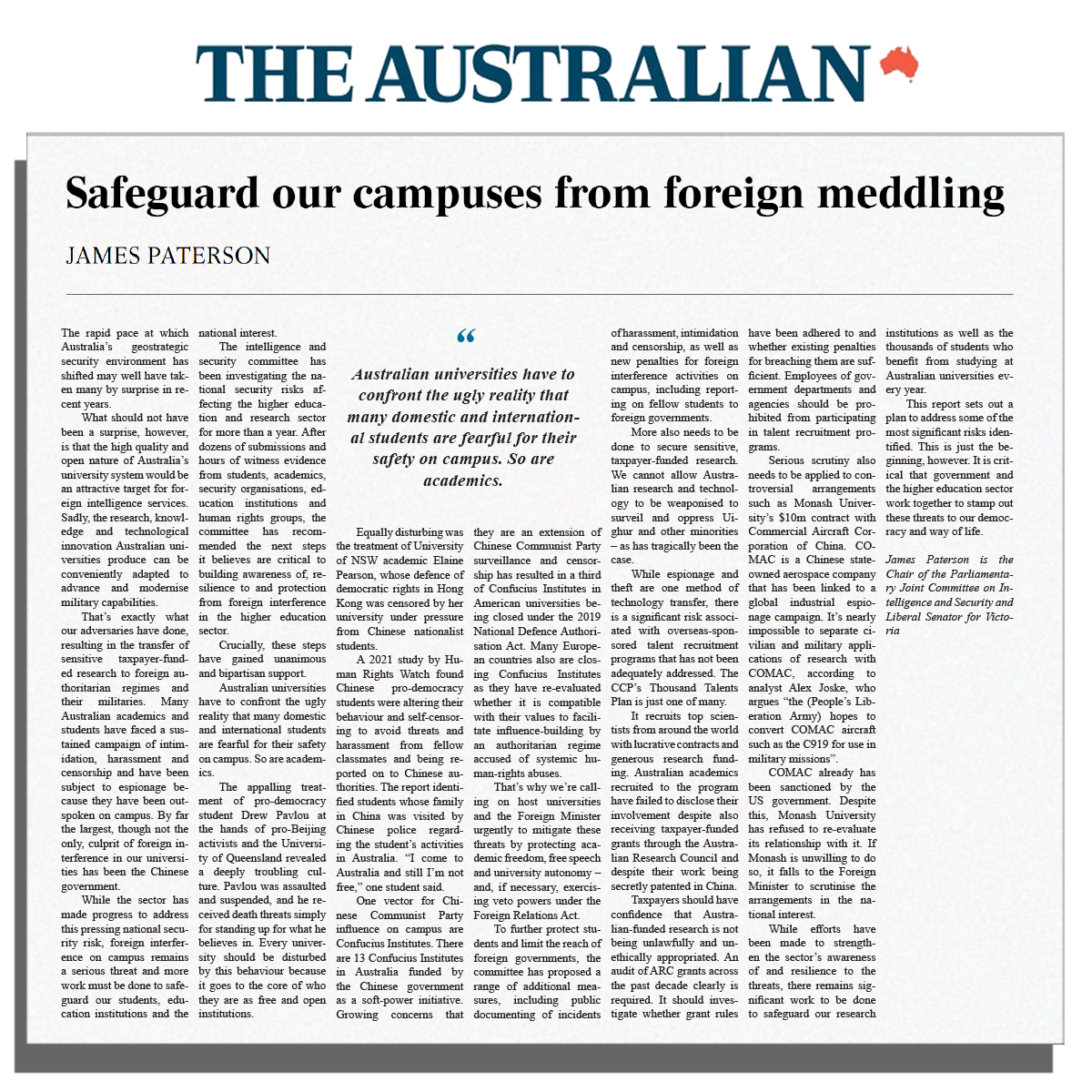 The rapid pace at which Australia’s geostrategic security environment has shifted may well have taken many by surprise in recent years.

What should not have been a surprise, however, is that the high quality and open nature of Australia’s university system would be an attractive target for foreign intelligence services. Sadly, the research, knowledge and tech­nological innovation Australian universities produce can be conveniently adapted to advance and modernise military capabilities.

That’s exactly what our adversaries have done, resulting in the transfer of sensitive taxpayer-funded research to foreign authoritarian regimes and their militaries. Many Australian academics and students have faced a sustained campaign of intimidation, harassment and censorship and have been subject to espionage because they have been outspoken on campus. By far the largest, though not the only, culprit of foreign interference in our universities has been the Chinese government.

While the sector has made progress to address this pressing national security risk, foreign interference on campus remains a serious threat and more work must be done to safeguard our students, education institutions and the national interest.

The intelligence and security committee has been investigating the national security risks affecting the higher education and research sector for more than a year. After dozens of submissions and hours of witness evidence from students, academics, security organisations, education institutions and human rights groups, the committee has recommended the next steps it believes are critical to building awareness of, resilience to and protection from foreign interference in the higher education sector.

Crucially, these steps have gained unanimous and bipartisan support.

Australian universities have to confront the ugly reality that many domestic and international students are fearful for their safety on campus. So are academics.

The appalling treatment of pro-democracy student Drew Pavlou at the hands of pro-Beijing activists and the University of Queensland revealed a deeply troubling culture. Pavlou was assaulted and suspended, and he received death threats simply for standing up for what he believes in. Every university should be disturbed by this behaviour because it goes to the core of who they are as free and open institutions.

Equally disturbing was the treatment of University of NSW academic Elaine Pearson, whose defence of democratic rights in Hong Kong was censored by her university under pressure from Chinese nationalist students.

A 2021 study by Human Rights Watch found Chinese pro-democracy students were altering their behaviour and self-censoring to avoid threats and harassment from fellow classmates and being reported on to Chinese authorities. The report identified students whose family in China was visited by Chinese police regarding the student’s activities in Australia. “I come to Australia and still I’m not free,” one student said.

That’s why we’re calling on host universities and the Foreign Minister urgently to mitigate these threats by protecting academic freedom, free speech and university autonomy – and, if necessary, exercising veto powers under the Foreign Relations Act.

To further protect students and limit the reach of foreign governments, the committee has proposed a range of additional measures, including public documenting of incidents of harassment, intimidation and censorship, as well as new penalties for foreign interference activities on campus, including reporting on fellow students to foreign governments.

More also needs to be done to secure sensitive, taxpayer-funded research. We cannot allow Australian research and technology to be weaponised to surveil and oppress Uighur and other minorities – as has tragically been the case.

While espionage and theft are one method of technology transfer, there is a significant risk associated with overseas-sponsored talent recruitment programs that has not been adequately addressed. The CCP’s Thousand Talents Plan is just one of many.

It recruits top scientists from around the world with lucrative contracts and generous research funding. Australian academics recruited to the program have failed to disclose their involvement despite also receiving taxpayer-funded grants through the Australian Research Council and despite their work being secretly patented in China.

Taxpayers should have confidence that Australian-funded research is not being unlawfully and unethically appropriated. An audit of ARC grants across the past decade clearly is required. It should investigate whether grant rules have been adhered to and whether existing penalties for breaching them are sufficient. Employees of government departments and agencies should be prohibited from participating in talent recruitment programs.

Serious scrutiny also needs to be applied to controversial arrangements such as Monash University’s $10m contract with Commercial Aircraft Corporation of China. COMAC is a Chinese state-owned aerospace company that has been linked to a global industrial espionage campaign. It’s nearly impossible to separate civilian and military applications of research with COMAC, according to analyst Alex Joske, who argues “the (People’s Liberation Army) hopes to convert COMAC aircraft such as the C919 for use in military missions”.

COMAC already has been sanctioned by the US government. Despite this, Monash University has refused to re-evaluate its relationship with it. If Monash is unwilling to do so, it falls to the Foreign Minister to scrutinise the arrangements in the national interest.

While efforts have been made to strengthen the sector’s awareness of and resilience to the threats, there remains significant work to be done to safeguard our research institutions as well as the thousands of students who benefit from studying at Australian universities every year.

This report sets out a plan to address some of the most significant risks identified. This is just the beginning, however. It is critical that government and the higher education sector work together to stamp out these threats to our democracy and way of life.

James Paterson is a Liberal senator for Victoria and chairman of the Parliamentary Joint Committee on Intelligence and Security.