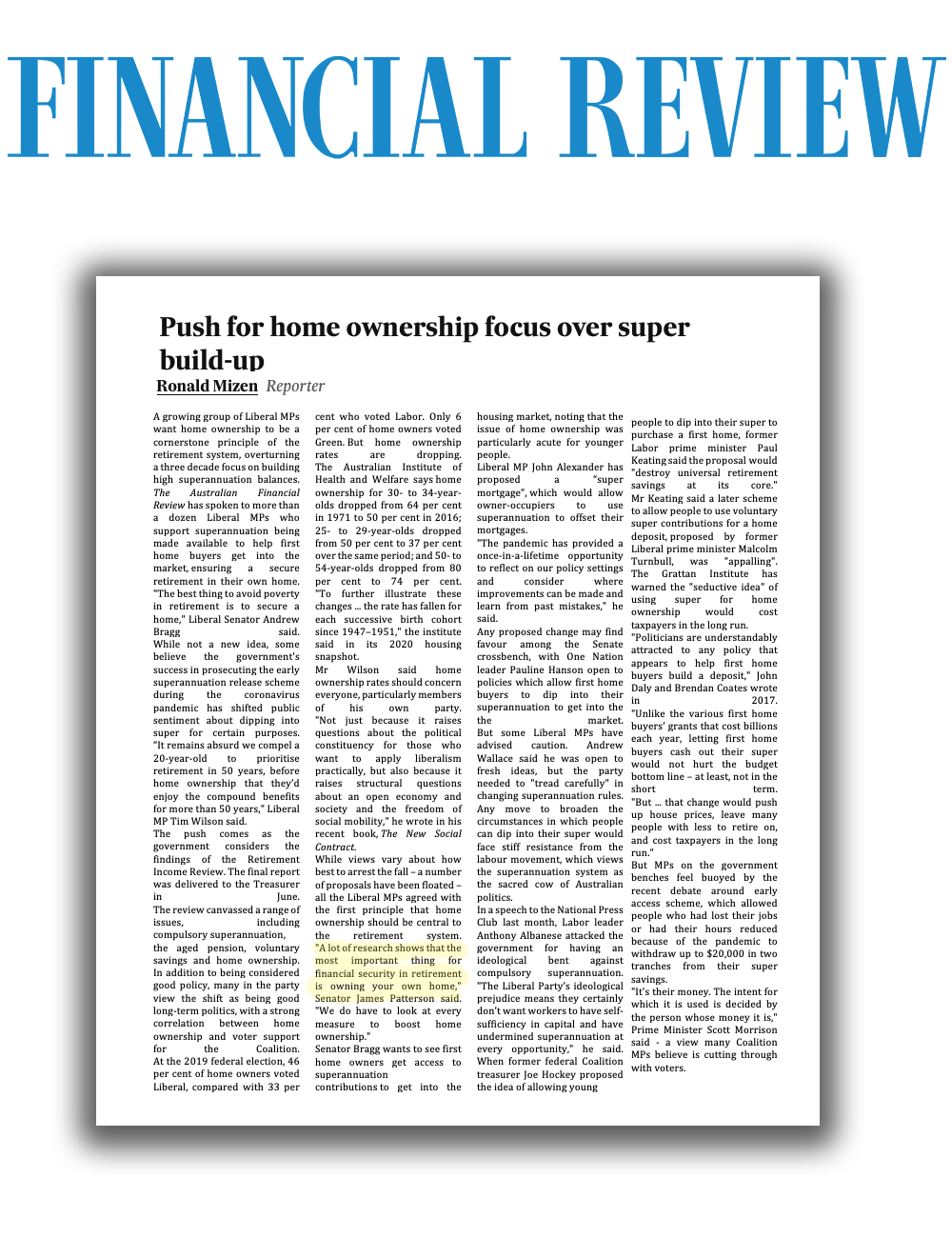 A growing group of Liberal MPs want home ownership to be a cornerstone principle of the retirement system, overturning a three decade focus on building high superannuation balances.The Australian Financial Review has spoken to more than a dozen Liberal MPs who support superannuation being made available to help first home buyers get into the market, ensuring a secure retirement in their own home.

"The best thing to avoid poverty in retirement is to secure a home," Liberal Senator Andrew Bragg said.

While not a new idea, some believe the government's success in prosecuting the early superannuation release scheme during the coronavirus pandemic has shifted public sentiment about dipping into super for certain purposes.“It remains absurd we compel a 20-year-old to prioritise retirement in 50 years, before home ownership that they’d enjoy the compound benefits for more than 50 years," Liberal MP Tim Wilson said.The push comes as the government considers the findings of the Retirement Income Review. The final report was delivered to the Treasurer in June.The review canvassed a range of issues, including compulsory superannuation, the aged pension, voluntary savings and home ownership.

In addition to being considered good policy, many in the party view the shift as being good long-term politics, with a strong correlation between home ownership and voter support for the Coalition.

At the 2019 federal election, 46 per cent of home owners voted Liberal, compared with 33 per cent who voted Labor. Only 6 per cent of home owners voted Green. But home ownership rates are dropping.The Australian Institute of Health and Welfare says home ownership for 30- to 34-year-olds dropped from 64 per cent in 1971 to 50 per cent in 2016; 25- to 29-year-olds dropped from 50 per cent to 37 per cent over the same period; and 50- to 54-year-olds dropped from 80 per cent to 74 per cent."To further illustrate these changes ... the rate has fallen for each successive birth cohort since 1947–1951," the institute said in its 2020 housing snapshot.Mr Wilson said home ownership rates should concern everyone, particularly members of his own party."Not just because it raises questions about the political constituency for those who want to apply liberalism practically, but also because it raises structural questions about an open economy and society and the freedom of social mobility," he wrote in his recent book, The New Social Contract.While views vary about how best to arrest the fall – a number of proposals have been floated – all the Liberal MPs agreed with the first principle that home ownership should be central to the retirement system."A lot of research shows that the most important thing for financial security in retirement is owning your own home," Senator James Patterson said. "We do have to look at every measure to boost home ownership."

Senator Bragg wants to see first home owners get access to superannuation contributions to get into the housing market, noting that the issue of home ownership was particularly acute for younger people.Liberal MP John Alexander has proposed a “super mortgage”,which would allow owner-occupiers to use superannuation to offset their mortgages."The pandemic has provided a once-in-a-lifetime opportunity to reflect on our policy settings and consider where improvements can be made and learn from past mistakes," he said.Any proposed change may find favour among the Senate crossbench, with One Nation leader Pauline Hanson open to policies which allow first home buyers to dip into their superannuation to get into the the market.But some Liberal MPs have advised caution. Andrew Wallace said he was open to fresh ideas, but the party needed to "tread carefully" in changing superannuation rules.Any move to broaden the circumstances in which people can dip into their super would face stiff resistance from the labour movement, which views the superannuation system as the sacred cow of Australian politics.In a speech to the National Press Club last month, Labor leader Anthony Albanese attacked the government for having an ideological bent against compulsory superannuation."The Liberal Party’s ideological prejudice means they certainly don’t want workers to have self-sufficiency in capital and have undermined superannuation at every opportunity," he said.When former federal Coalition treasurer Joe Hockey proposed the idea of allowing young people to dip into their super to purchase a first home, former Labor prime minister Paul Keating said the proposal would "destroy universal retirement savings at its core."Mr Keating said a later scheme to allow people to use voluntary super contributions for a home deposit, proposed by former Liberal prime minister Malcolm Turnbull, was "appalling".The Grattan Institute has warned the "seductive idea" of using super for home ownership would cost taxpayers in the long run."Politicians are understandably attracted to any policy that appears to help first home buyers build a deposit," John Daly and Brendan Coates wrote in 2017."Unlike the various first home buyers’ grants that cost billions each year, letting first home buyers cash out their super would not hurt the budget bottom line – at least, not in the short term."But ... that change would push up house prices, leave many people with less to retire on, and cost taxpayers in the long run."But MPs on the government benches feel buoyed by the recent debate around early access scheme, which allowed people who had lost their jobs or had their hours reduced because of the pandemic to withdraw up to $20,000 in two tranches from their super savings."It's their money. The intent for which it is used is decided by the person whose money it is," Prime Minister Scott Morrison said - a view many Coalition MPs believe is cutting through with voters.