Politicians rallying against superannuation increase earning more super than most 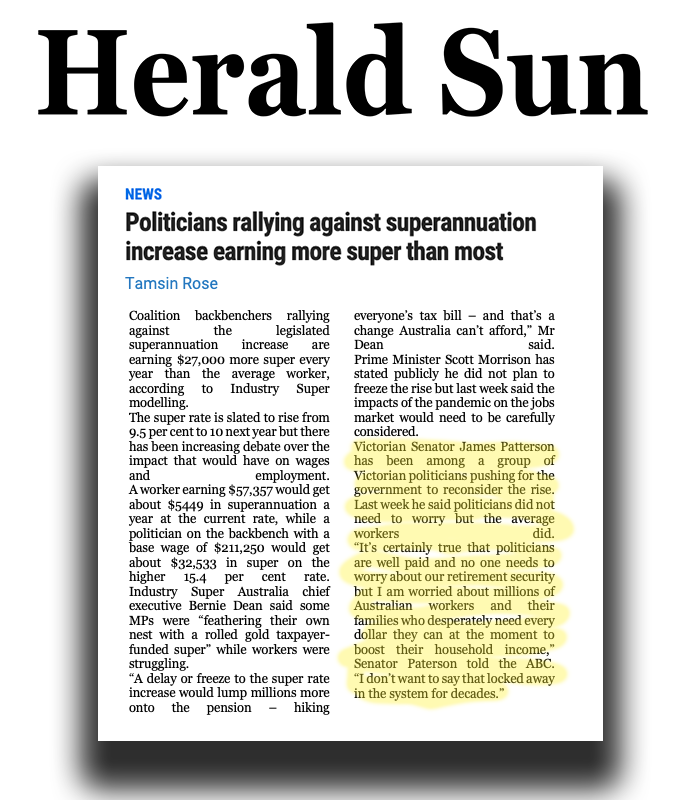 Coalition backbenchers rallying against the legislated superannuation increase are earning $27,000 more super every year than the average worker, according to Industry Super modelling.The super rate is slated to rise from 9.5 per cent to 10 next year but there has been increasing debate over the impact that would have on wages and employment.A worker earning $57,357 would get about $5449 in superannuation a year at the current rate, while a politician on the backbench with a base wage of $211,250 would get about $32,533 in super on the higher 15.4 per cent rate.Industry Super Australia chief executive Bernie Dean said some MPs were “feathering their own nest with a rolled gold taxpayer-funded super” while workers were struggling.“A delay or freeze to the super rate increase would lump millions more onto the pension – hiking everyone’s tax bill – and that’s a change Australia can’t afford,” Mr Dean said.Prime Minister Scott Morrison has stated publicly he did not plan to freeze the rise but last week said the impacts of the pandemic on the jobs market would need to be carefully considered.Victorian Senator James Patterson has been among a group of Victorian politicians pushing for the government to reconsider the rise.Last week he said politicians did not need to worry but the average workers did.“It’s certainly true that politicians are well paid and no one needs to worry about our retirement security but I am worried about millions of Australian workers and their families who desperately need every dollar they can at the moment to boost their household income,” Senator Paterson told the ABC.“I don’t want to say that locked away in the system for decades.”