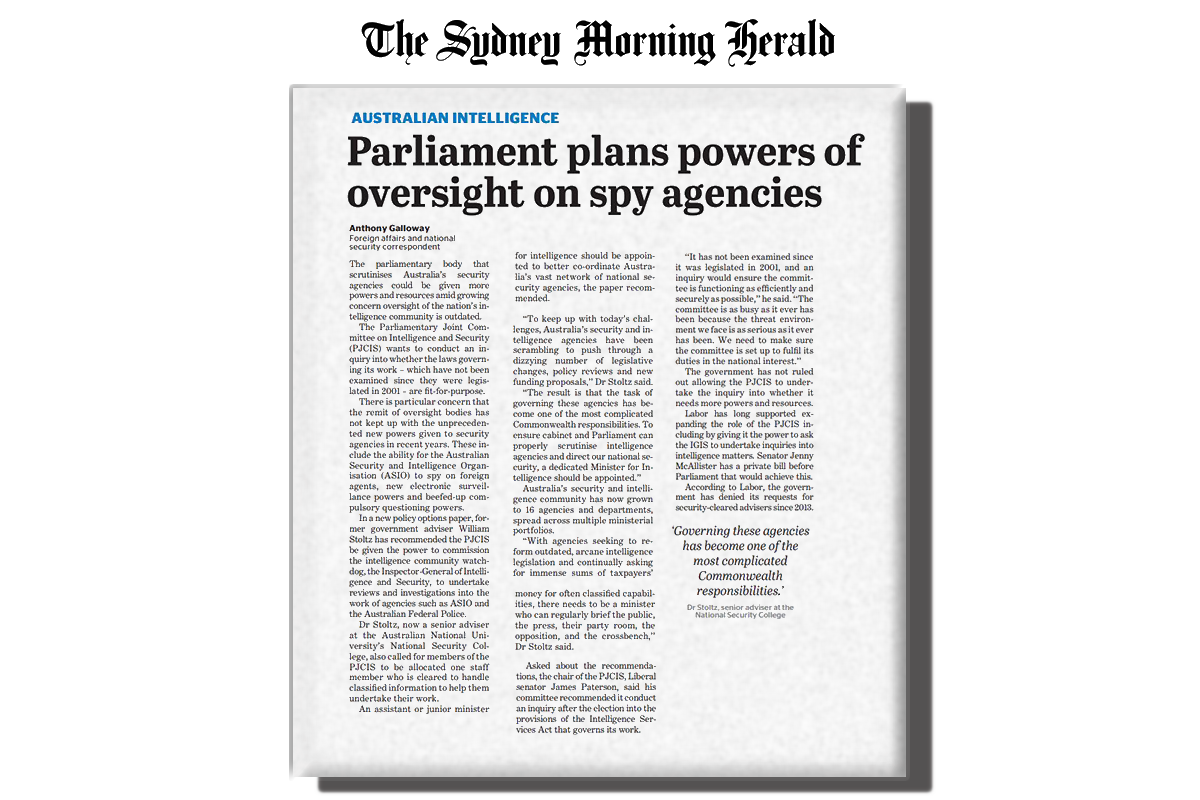 The parliamentary body that scrutinises Australia’s security agencies could be given more powers and resources amid growing concern that the oversight of the nation’s intelligence community is outdated.

The Parliamentary Joint Committee on Intelligence and Security (PJCIS) wants to conduct an inquiry into whether the laws governing its work – which have not been examined since they were legislated in 2001 – are fit-for-purpose.

There is particular concern that the remit of oversight bodies has not kept up with the unprecedented new powers given to security agencies in recent years. These include the ability for the Australian Security and Intelligence Organisation (ASIO) to spy on foreign agents, new electronic surveillance powers and beefed-up compulsory questioning powers.

In a new policy options paper, former government adviser William Stoltz has recommended the PJCIS be given the power to commission the intelligence community watchdog, the Inspector-General of Intelligence and Security, to undertake reviews and investigations into the work of agencies such as ASIO and the Australian Federal Police.

Dr Stoltz, now a senior adviser at the Australian National University’s National Security College, also called for members of the PJCIS to be allocated one staff member who is cleared to handle classified information to help them undertake their work.

An assistant or junior minister for intelligence should be appointed to better co-ordinate Australia’s vast network of national security agencies, the paper recommended.

“To keep up with today’s challenges, Australia’s security and intelligence agencies have been scrambling to push through a dizzying number of legislative changes, policy reviews and new funding proposals,” Dr Stoltz said.

“The result is that the task of governing these agencies has become one of the most complicated Commonwealth responsibilities. To ensure cabinet and Parliament can properly scrutinise intelligence agencies and direct our national security, a dedicated Minister for Intelligence should be appointed.”

“With agencies seeking to reform outdated, arcane intelligence legislation and continually asking for immense sums of taxpayers’ money for often classified capabilities, there needs to be a minister who can regularly brief the public, the press, their party room, the opposition, and the crossbench,” Dr Stoltz said.

Asked about the recommendations, the chair of the PJCIS, Liberal senator James Paterson, said his committee has already recommended it conduct an inquiry after the next election into the provisions of the Intelligence Services Act that governs its work.

“It has not been examined since it was legislated in 2001, and an inquiry would ensure the committee is functioning as efficiently and securely as possible,” he said.

The government has not ruled out allowing the PJCIS to undertake the inquiry into whether it needs more powers and resources.

Labor has long supported expanding the role of the PJCIS including by giving it the power to ask the IGIS to undertake inquiries into matters relating to intelligence agencies. Labor’s Senator Jenny McAllister has a private bill before Parliament that would achieve this.

According to Labor, the government has repeatedly denied its requests for security-cleared advisers since 2013.