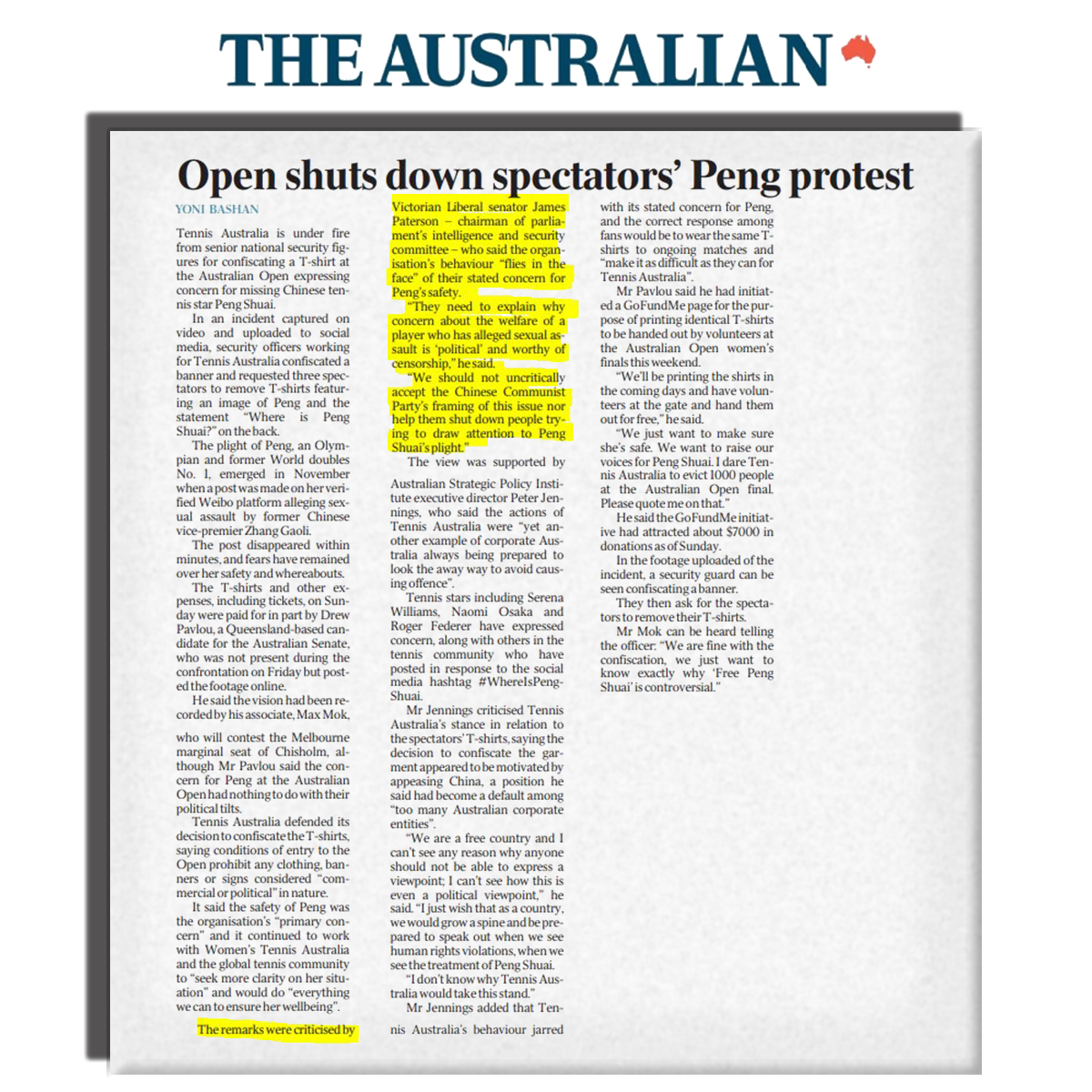 In an incident captured on video and uploaded to social media, security officers working for Tennis Australia confiscated a banner and requested three spectators to remove T-shirts featuring an image of Peng and the statement “Where is Peng Shuai?” on the back.

The plight of Peng, an Olym­pian and former World doubles No. 1, emerged in November when a post was made on her verified Weibo platform alleging sexual assault by former Chinese vice-premier Zhang Gaoli.

The post disappeared within minutes, and fears have remained over her safety and whereabouts.

The T-shirts and other expenses, including tickets, on Sunday were paid for in part by Drew Pavlou, a Queensland-based candidate for the Australian Senate, who was not present during the confrontation on Friday but posted the footage online.

He said the vision had been recorded by his associate, Max Mok, who will contest the Melbourne marginal seat of Chisholm, although Mr Pavlou said the concern for Peng at the Australian Open had nothing to do with their political tilts.

Tennis Australia defended its decision to confiscate the T-shirts, saying conditions of entry to the Open prohibit any clothing, banners or signs considered “commercial or political” in nature.

It said the safety of Peng was the organisation’s “primary concern” and it continued to work with Women’s Tennis Australia and the global tennis community to “seek more clarity on her situation” and would do “everything we can to ensure her wellbeing”.

The remarks were criticised by Victorian Liberal senator James Paterson – chairman of parliament’s intelligence and security committee – who said the organisation’s behaviour “flies in the face” of their stated concern for Peng’s safety.

“They need to explain why concern about the welfare of a player who has alleged sexual assault is ‘political’ and worthy of censorship,” he said.

“We should not uncritically accept the Chinese Communist Party’s framing of this issue nor help them shut down people trying to draw attention to Peng Shuai’s plight.”

The view was supported by Australian Strategic Policy Institute executive director Peter Jennings, who said the actions of Tennis Australia were “yet another example of corporate Australia always being prepared to look the away way to avoid causing offence”.

Tennis stars including Serena Williams, Naomi Osaka and Roger Federer have expressed concern, along with others in the tennis community who have posted in response to the social media hashtag #WhereIsPengShuai.

Mr Jennings criticised Tennis Australia’s stance in relation to the spectators’ T-shirts, saying the decision to confiscate the garment appeared to be motivated by appeasing China, a position he said had become a default among “too many Australian corporate entities”.

“We are a free country and I can’t see any reason why anyone should not be able to express a viewpoint; I can’t see how this is even a political viewpoint,” he said. “I just wish that as a country, we would grow a spine and be prepared to speak out when we see human rights violations, when we see the treatment of Peng Shuai.

“I don’t know why Tennis Australia would take this stand.”

Mr Jennings added that Tennis Australia’s behaviour jarred with its stated concern for Peng, and the correct response among fans would be to wear the same T-shirts to ongoing matches and “make it as difficult as they can for Tennis Australia”.

Mr Pavlou said he had initiated a GoFundMe page for the purpose of printing identical T-shirts to be handed out by volunteers at the Australian Open women’s ­finals this weekend.

“We’ll be printing the shirts in the coming days and have volunteers at the gate and hand them out for free,” he said.

“We just want to make sure she’s safe. We want to raise our voices for Peng Shuai. I dare Tennis Australia to evict 1000 people at the Australian Open final. Please quote me on that.”

He said the GoFundMe initiative had attracted about $7000 in donations as of Sunday.

In the footage uploaded of the incident, a security guard can be seen confiscating a banner.

They then ask for the spectators to remove their T-shirts.

Mr Mok can be heard telling the officer: “We are fine with the confiscation, we just want to know exactly why ‘Free Peng Shuai’ is controversial.”