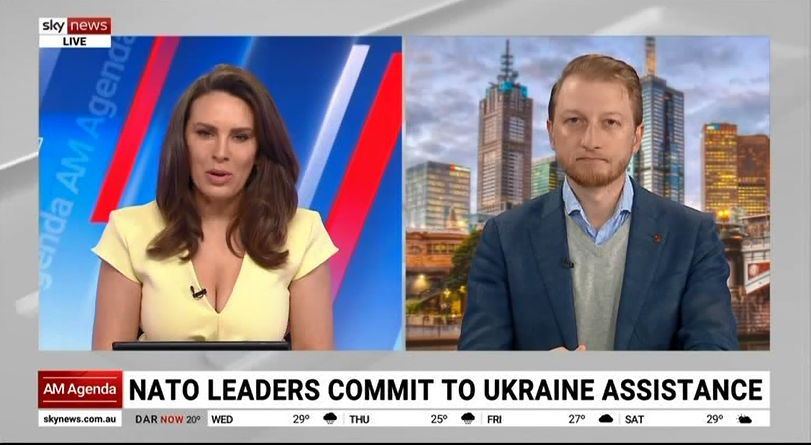 LAURA JAYES: Joining me live now is Liberal Senator James Paterson. James, thanks so much for your time. There was all this talk about Labor going soft on China in the election campaign. Now, we're more than a month into this new government. There's no evidence that they have gone soft, is there? It's quite the opposite.

JAMES PATERSON: Laura, I really welcome the Prime Minister's comments, reported comments in Madrid. That's very sensible. And he's, of course, right. The challenge of rising authoritarianism is not just one for Europe, it's one for the Indo-Pacific as well, our own region. In fact, it's nice to hear Anthony Albanese saying the sort of things that I've been saying for years, that people like Andrew Hastie and Peter Dutton and others have been saying for years, in fact we were criticised by the Labor Party for saying for years. So, if this is a conversion from the Prime Minister to be taking these issues more seriously and from the Labor Party, then I welcome it.

JAYES: This is a conversion or is this just what they were always expected to do? As my colleague Andrew Clennell pointed out this morning, you have the same advisers, both governments in the public service. Why would they diverge from that?

PATERSON: And if they listen to that advice and are acting on it, then I welcome it. And that's appropriate. But it's certainly the case when China's behaviour was called out by Australia, by our government over the last nine years, that we were repeatedly criticised by the Labor Party for doing so, and we were told that we were engaging in megaphone diplomacy. Now if Anthony Albanese is calling out the Chinese government in Madrid and bringing it to the attention to world leaders at NATO, then that's exactly what Scott Morrison did at the G7 plus three about a year ago and that's exactly what he should be doing and I welcome that and I welcome the fact that Labor Party in office is being, so far, sensible on these issues.

JAYES: One thing they I've done differently, though, is the diplomacy. It seems we're out of the deep freeze with this governments. So, do you welcome that as well? Was that a step that your government should have taken but didn't?

PATERSON: Well, we didn't have counterparts on the Chinese government side who were willing to meet with us. We offered repeatedly, our ministers wrote to their counterparts and sought meetings and they were not responded to. The Chinese government has decided to open up that pathway, that discussion with the Albanese government and we've welcomed that. That is a welcome thing. But we've also said that we’ll judge the Chinese government by their actions, not by their words. And until we see some tangible evidence that they're treating Australia with respect instead of with contempt, then I think we should adopt the same posture we have. And the key test for them is, do they remove all of the tariffs that were unjustifiably put on Australian businesses? Do they cease to interfere in our democracy through foreign interference and espionage? Do they cease to engage in cyber-attacks on our critical infrastructure? When things like that start to happen, then I think we'll have a different relationship with the Chinese government.

JAYES: We've seen a new government bring at least perhaps hope of dialogue with China. Anthony Albanese also claiming overnight a new government has also seen more progress on the EU FTA. Do you buy that?

PATERSON: Well, that'd be a great thing. It was our government that launched the European free trade agreement negotiations in 2018 and substantial progress has been made under trade ministers Simon Birmingham and Dan Tehan in particular. And that was really good progress. But these things take a long time. For example, Canada's negotiation of a free trade agreement with the European Union took seven years, so it's notoriously difficult to secure a free trade agreement with the EU. They have very few bilateral free trade agreements. If there is more progress under this government, then I certainly welcome that. It's a really important part of diversifying Australia's international trade to make sure that we're not reliant on any one market, in particular the Chinese market, given that the Chinese government has used trade as a weapon of economic coercion against Australia.

JAYES: Okay. But he, Anthony Albanese, seemed to suggest that a lack of action, a perceived lack of action from the former government on climate change was a bit of a roadblock to that EU FTA. Do you agree?

PATERSON: I don't see the evidence for that. I hope that if that was a roadblock, it's now removed and we'll get a very quick agreement any day now. We'll see. We'll judge the Albanese government by how quickly it is able to reach agreement with the EU. I think they'll find, as the Canadian government found that no matter what your alignment is on climate change or other issues, that it is just difficult to negotiate free trade agreements with the European Union because every member state has the right to veto over it and therefore you have to negotiate very complex, intricate interests which have to be balanced across a very diverse economic area. And it's not a straightforward thing to do, but if they can get it done really quickly, then I'll be the first to congratulate them for it.

JAYES: James, I know you keep a close eye on US politics as well. What's happened overnight at that congressional hearing is quite stunning. What do you make of the latest allegations and Donald Trump's role in January 6?

PATERSON: I wasn't up all night watching the testimony, Laura, but I did see some reports this morning on social media, and I'll be very reluctant to wade into domestic US politics, except to say that I think one of the great features of the US system and our system, of liberal democracies, is the peaceful transfer of power and respecting legitimate election results. And it's important that all of us in public life, when we have a win or when we have a loss, that we accept that and that we facilitate the peaceful transfer of power from one party to another. Otherwise, we're not better than those we seek to criticise who have authoritarian systems.

JAYES: This is like something we've never seen before, though. I mean, a senior aide saying Donald Trump knew that these rioters were armed. He wanted to go to the Capitol and when his security team said it was unsafe he attempted to assault them. I mean, that's like out of a Hollywood movie, isn't it?

PATERSON: Certainly, extraordinary reports, Laura and if they were to be substantiated and proven, they would be very serious indeed.

JAYES: Okay. You don't want to buy into that, James. Why not?

PATERSON: Not more than I already have because I don't think there's much to be gained by wading into the domestic politics of another country, particularly a close ally. I have said, though, that I think that the peaceful transfer of power is one of the great features of our system, and we've just been through that in our system of government. It wasn't a happy experience to lose government, but we wish the new government all the best and we have ensured that they get the best start possible. We've set them up, I think, particularly in national security and foreign affairs for a very good start with agreements like AUKUS with the United States and the United Kingdom. And we will do everything we can to make sure that works because it's in our national interest that it works.

JAYES: Are you reluctant to weigh in here because you think there's a chance that Donald Trump could become president again?

JAYES: Okay, James, thanks so much for your time, as always. We'll speak soon.