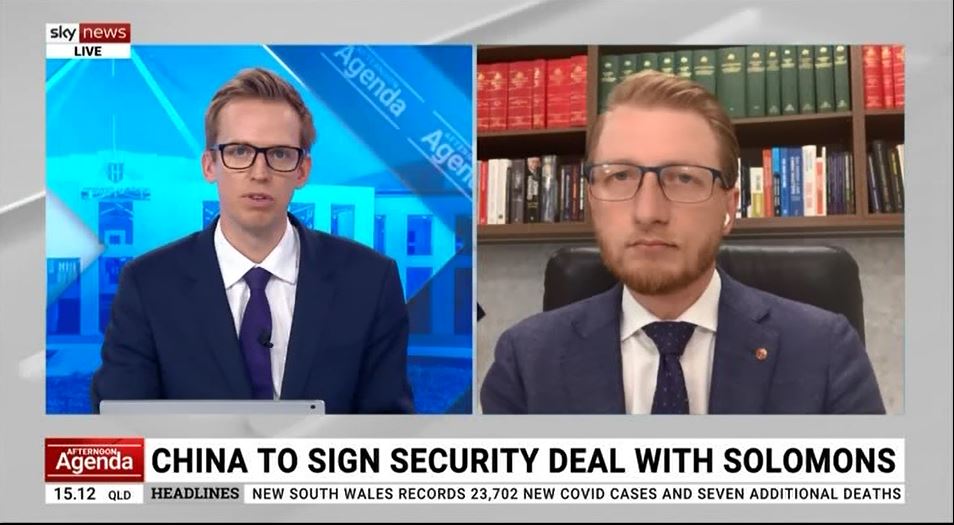 TOM CONNELL: We're joined by Chair of the Joint Committee on Intelligence and Security, Senator James Paterson. Thanks very much for your time. Let's start with some of these particular projects. Is it getting difficult in this environment to see many, if any, in your view,partnerships between universities in Australia and Chinese companies being something in the national interest?

SENATOR JAMES PATERSON: One thing I think it's very important to recognise, Tom, about Chinese companies or indeed Chinese universities is that they are not like companies and universities in other countries, in particular Western liberal democracies. In reality, there is no such thing as a Chinese company, particularly a large one, which is completely disconnected and completely separate from the state. Jack Ma thought Alibaba was completely disconnected and separate from the state, and he learned the hard way that that's not the case. All Chinese companies, and certainly all Chinese universities are in many ways directed by the state, and they serve the state's objectives or the Chinese Communist Party's objectives and universities need to be much more discerning about that when they enter into these relationships,which I don't think they've been sufficiently in the past.

CONNELL: Is it a bit hard for them to figure that out though. Do you need, because we know often the Chinese government takes offense when we move in and cancel something at a government level, so would it be better if they got more of a guiding hand, maybe a rulebook on what sort of partnerships are not going to be found to be above board? Because then you don't have to move in and cancel them.

SENATOR PATERSON: During the inquiry, universities mounted two inconsistent lines of argument. On the one hand, they said, please give us autonomy to manage our own universities. Please don't pile too much red tape and regulation on us. And then the other time they said, if we shouldn't be doing things in the national interest, please clearly tell us that we shouldn't be. It's difficult to have it both ways. If they want their autonomy and they use that autonomy to enter into relationships with Chinese state enterprises that sit at the heart of Xi Jinping's civil military fusion and which have been accused of industrial state espionage and which have been sanctioned by the American government, as Monash University has done with COMAC, then if they'reusing their judgment in that way then I think it is important that the federal government have the power as we do now under the Foreign Relations Act, to step in and direct them to no longer do so. And I think on Confucius Institutes,it's important for universities to reflect; do they really want to be party to a soft power exercise for a foreign authoritarian government, which is engaged in a systemic human rights abuses and has even been accused of genocide? Is that really consistent with their values as universities? And how does it make students on campus from Hong Kong or Taiwan or from mainland China have dissident political views feel? How safe do they feel on campus when they know there's a Confucius Institute there?

CONNELL: So, here's the question with the government, though, because you can talk about partnerships and security risks around a partnership with the university and perhaps sensitive technology in a Chinese company. But we're talking more ideological on the Confucius Institutes. Should universities be free still if they want to? You've mentioned what you see is the risk for them in a reputational sense, but shouldn't they be free to risk their reputations if they want to?

SENATOR PATERSON: The committee made a couple of recommendations in relation to Confucius Institutes. In the first instance,we've asked that the agreements be made public, and the funding arrangements be made public. We've also recommended the universities ensure that their own autonomy in relation to the Confucius Institutes is protected, along with academic freedom and freedom of speech. It's important that universities control the curriculum and the hiring and firing of staff at those institutes.Now, if they're able to meet all of those objectives, then I think it is a values-based judgment for the universities to determine whether or not they want to have a Confucius Institute on the campus. However, the Foreign Minister does retain the power to veto those agreements, and the committee has asked the Foreign Minister to look at this issue and make a decision in the national interest.

CONNELL: But should the Foreign Minister be vetoing them only on those grounds? It's not an all-encompassing power?

SENATOR PATERSON: Well, I'd like to see universities really have a deep reflection about whether or not as we go into the future and a more uncertain geopolitical environment in the Indo-Pacific, whether it is still wise and whether it is still consistent with their values to have Confucius Institutes on campus, given that they are a soft power initiative of a foreign authoritarian government which has sanctioned Australia, sanctioned our trade in an unjustified way, which is militarising the South China Sea,which is oppressing the Uyghur people and Tibetans and Hong Kong, and which is threatening war against Taiwan. It is up to them to reflect on that.

CONNELL: Ok. That same government might be signing a security pact of sorts with the Solomon Islands, one of our neighbours. Are you hoping this does not come to fruition?

SENATOR PATERSON: Tom, the leaking of this draft report is worrying, although I am pleased that it is in the public domain. When Australia deals with our friends and our family in the Pacific, we do so openly and transparently. We don't feel the need to hide our engagement. We're very proud of our engagement. And I note that it has already been controversial within the Solomon Islands. The Opposition Leader has been very outspoken and critical of it. And I know it will be not welcomed by a number of other countries in the region, including in the Pacific and not just Australia. This is why Australia stepped up in the Pacific a number of years ago because we want to provide options and choices for the people of the Pacific. Because we support their sovereignty,we support their self-determination, we support their decisions in their own national interests. We want to make sure that they're not coerced or bullied or intimidated into going down a path they don't want to.

CONNELL: But surely the reason we had a step up in the Pacific was to stop this happening, and now it might happen anyway. Is this not some sort of wakeup call that whatever we're doing, it might not be enough?

SENATOR PATERSON: I think our step up was very foresighted and the increase in foreign aid and other commitments that we've made to the region were very foresighted because what it is about is providing options to the people of the Pacific. They are sovereign nations. It is not up to Australia to dictate to them what they can and can't do within their own territories, and we can never assert our own preferences over theirs. But all we can do is work with them in partnership and make clear what we think is in the interests of our country and it really is up to them to make their own decisions –

CONNELL: – this, for someone like yourself and the views you have, must make you think, let's just reflect on whether or not we are doing enough? Security specialists in Australia are calling this a wakeup call. Shouldn't we be at least assessing where we're at in the region?

SENATOR PATERSON: Tom, as I said, I am very concerned about this, and I think it is useful in the sense that people like me who have pointed to dangers like this in the past have often been accused of not backing that up with evidence and not being able to prove our case. Well, this is the strongest evidence you will ever need that the Chinese Communist Party has very expansionist objectives in our region and that those are in direct contradiction to our own national interests. And we do need to be very engaged in the Pacific. We need to be very present. We need to be vocal, and we need to put our case very firmly.

CONNELL: Got about 15 seconds left. Can you work with Nick Xenophon if he's back in the Senate?

SENATOR PATERSON: Well, I think it's up to the people of South Australia to decide whether they want someone who has been representing the interests of Huawei, a company which has been banned from Australia's 4G,5G and NBN networks because it was a risk to national security to represent their interests in the Senate.

CONNELL: Senator James Paterson, thanks for your time today.