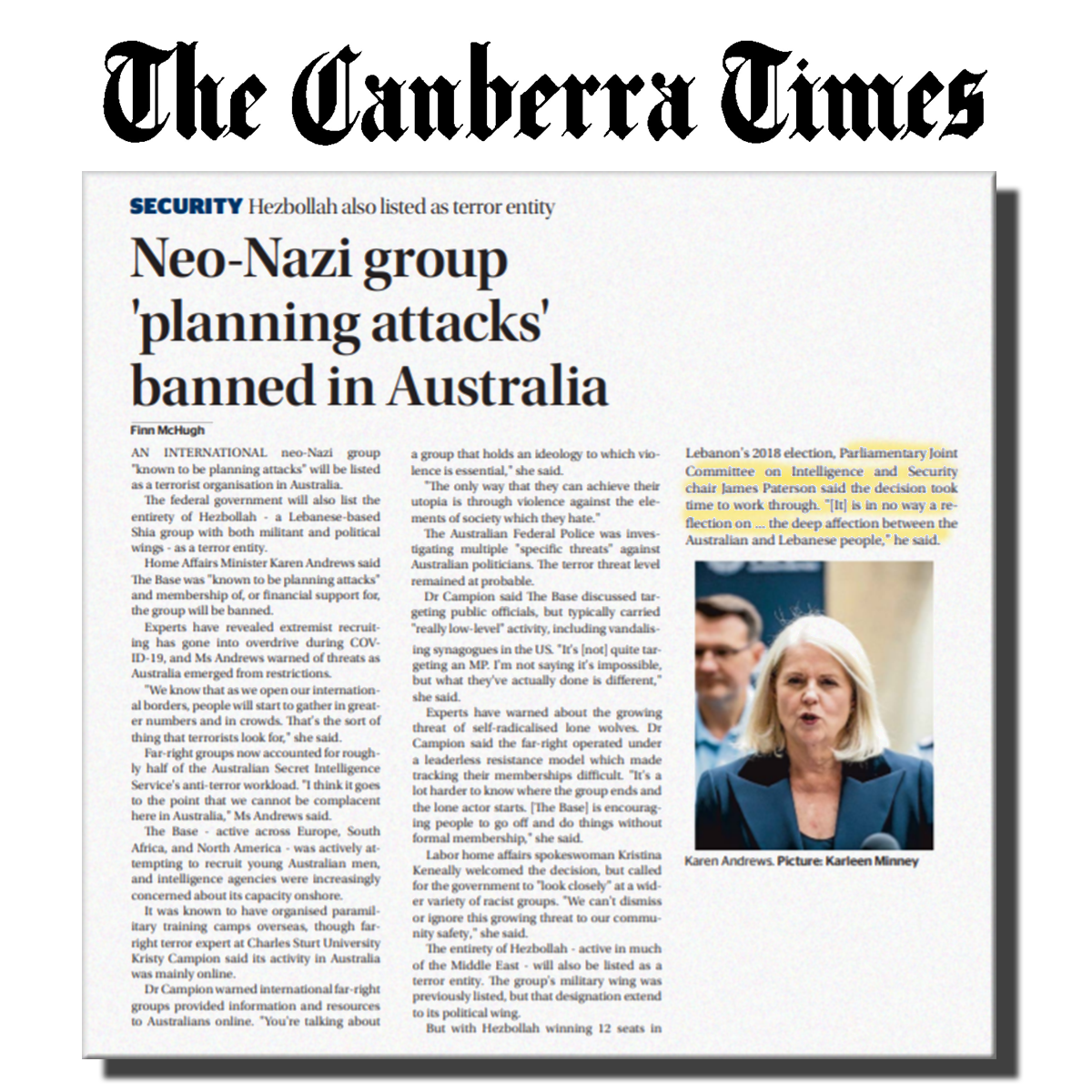 An international neo-Nazi group "known to be planning attacks" will be listed as a terrorist organisation in Australia.

The federal government will also list the entirety of Hezbollah - a Lebanese-based Shia group with both militant and political wings - as a terror entity.

Home Affairs Minister Karen Andrews said the Base, a violent white-supremacist group formed in the US in 2018, was known be planning attacks. Membership of the organisation will be banned in Australia.

Security experts have revealed extremist recruiting has gone into overdrive during COVID-19, and Ms Andrews warned threats were likely as Australia emerged from restrictions.

"We know that as we open our international borders, people will start to gather in greater numbers and in crowds. That's the sort of thing that terrorists look for. [But] I'm not here to scare people," she said.

The threat posed by far-right groups has grown rapidly in recent years, now accounting for roughly half of the Australian Secret Intelligence Service's anti-terror workload.

"I am concerned by the threat here in Australia. I am concerned about organisations that may have in the past worked closely together," Ms Andrews said.

"I think it goes to the point that we cannot be complacent here in Australia."

The Base - active across Europe, South Africa, and North America - was actively attempting to recruit young Australian men, and intelligence agencies were increasingly concerned about its capacity onshore.

It was known to have organised paramilitary training camps overseas, though far-right terror expert at Charles Sturt University Kristy Campion said its activity in Australia was mainly online.

"You're talking about a group that holds an ideology to which violence is essential," she said.

"The only way that they can achieve their utopia is through widespread violence against all those elements of society which they hate."

Along with ethnic minorities, that included politicians, journalists, academics, and members of the LGBTQ community, she said.

Dr Campion said the far-right regularly discussed targeting public officials, but there was a "gap" between what they planned and carried out.

While some members had been charged with conspiracy to murder in the US, the Base was typically behind "really low-level" activity, including coordinated vandalism of synagogues in the US.

"It is quite different to the targeting of an MP. I'm not saying it's impossible, just that what they've actually done is a bit different," she said.

Dr Campion said the far-right was seizing on uncertainty, operating under a leaderless resistance model which made tracking their memberships difficult.

"The Base particularly is accelerationist. How that manifests is they encourage people to undertake non-attributable terrorist attacks," she said.

"It's a lot harder to know where the group ends and the lone actor starts, because they're actually encouraging people to go off and do things without formal membership."

The group implemented a "very, very careful' vetting before allowing an extremist into the fold.

"They're not out there trying to indiscriminately get as many members as they can," Dr Campion said.

"They are quite precise about who they believe is a good fit for their organisation."

Labor home affairs spokeswoman Kristina Keneally welcomed the decision, but said the Base had limited activity within Australia.

Ms Keneally has been subjected to threats from the far-right National Socialist Network, and called for the government to "look closely" at a variety of racist groups.

"As the violent threats at recent protests demonstrate, we can't dismiss or ignore this growing threat to our community safety," she said.

Ms Andrews rejected claims the government had been to slow act, saying thorough consultation was needed. She said the government "would not hesitate" to list other groups which threatened Australia.

The entirety of Hezbollah - based in Lebanon, but active in much of the Middle East - will also be listed as a terror entity.

The group's military wing was previously listed but, after a recommendation from the Parliamentary Joint Committee on Intelligence and Security in June, that designation will be extended to include its political organisation.

PJCIS chair James Paterson said the designation was "very welcome" and consistent with listings by many of Australia's allies.

But with Hezbollah a fixture of Lebanese politics since the early 1990s, including winning 12 seats in the 2018 election, Mr Paterson said the implications the designation took time to work through.

"[It] is in no way a reflection on the bilateral relationship between Australia and Lebanon, nor on the deep affection between the Australian people and the Lebanese people," he told reporters.

"This is a discrete decision that relates to Hezbollah as a terrorist entity."