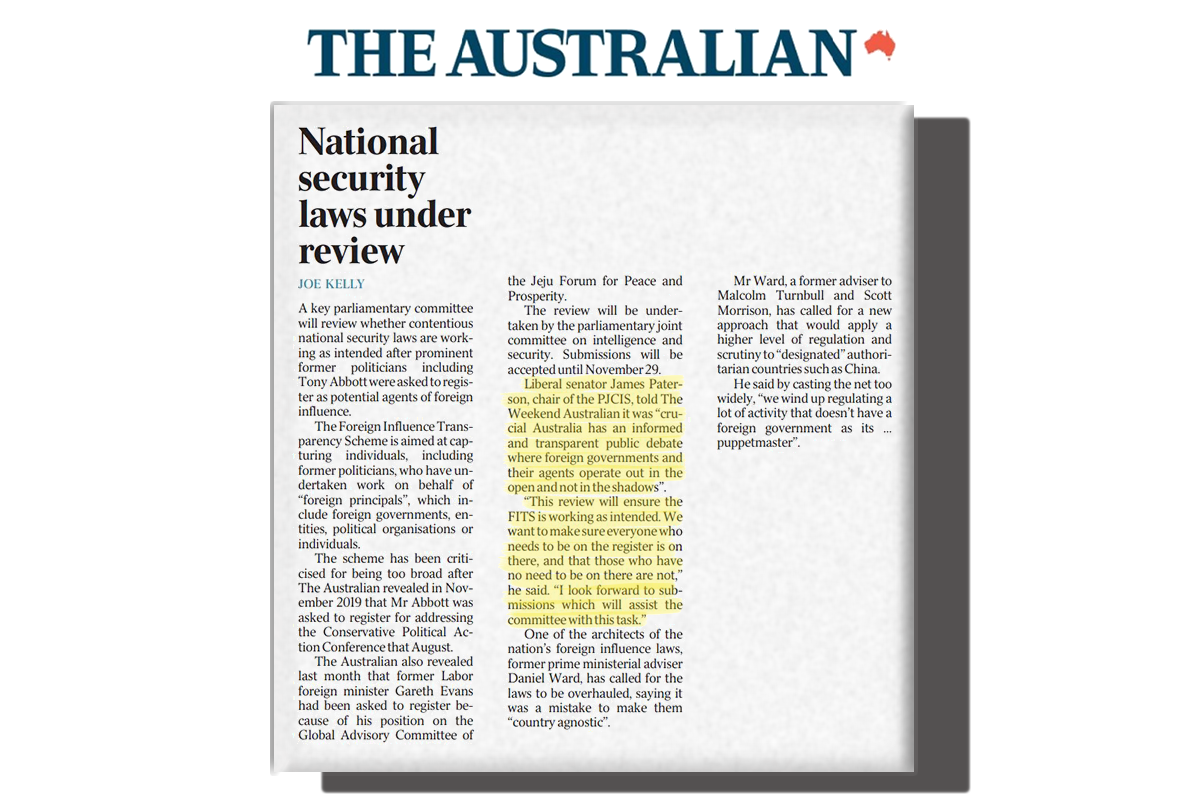 A key parliamentary committee will review whether contentious national security laws are working as intended after prominent former politicians including Tony Abbott were asked to register as potential agents of foreign influence.

The Foreign Influence Transparency Scheme is aimed at capturing individuals, including former politicians, who have undertaken work on behalf of “foreign principals” which includes foreign governments, entities, political organisations or individuals.

The scheme has been criticised for being too broad after The Australian revealed in November 2019 that Mr Abbott was asked to register for ­addressing the Conservative Political Action Conference in Aug­ust that year.

The Australian also revealed last month that former Labor foreign minister Gareth Evans had been asked to register because of his position on the Global Advisory Committee of the Jeju Forum for Peace and Prosperity.

The review will be undertaken by the Parliamentary Joint Committee on Intelligence and Security. Submissions will be accepted until November 29.

Liberal Senator James Paterson, the chair of the PJCIS, told The Australian it was “crucial that Australia has an informed and transparent public debate where foreign governments and their agents operate out in the open and not in the shadows.”

“This review will ensure the FITS is working as intended. We want to make sure everyone who needs to be on the register is actually on there, and that those who have no need to be on there are not,” he said.

“I look forward to submissions which will assist the committee with this task.”

One of the architects of the nation’s foreign influence laws, former prime ministerial adviser Daniel Ward, has called for the laws to be overhauled, saying it was a mistake to make them “country agnostic”.

Mr Ward, a former adviser to Malcolm Turnbull and Scott Morrison, has called for a new approach that would apply a higher level of regulation and scrutiny to “designated” authoritarian countries such as China.

He has warned that, by casting the net too widely, treating liberal democracies in the same way as authoritarian states, “we wind up regulating a lot of activity that doesn’t have a foreign government as its … puppet­master”.