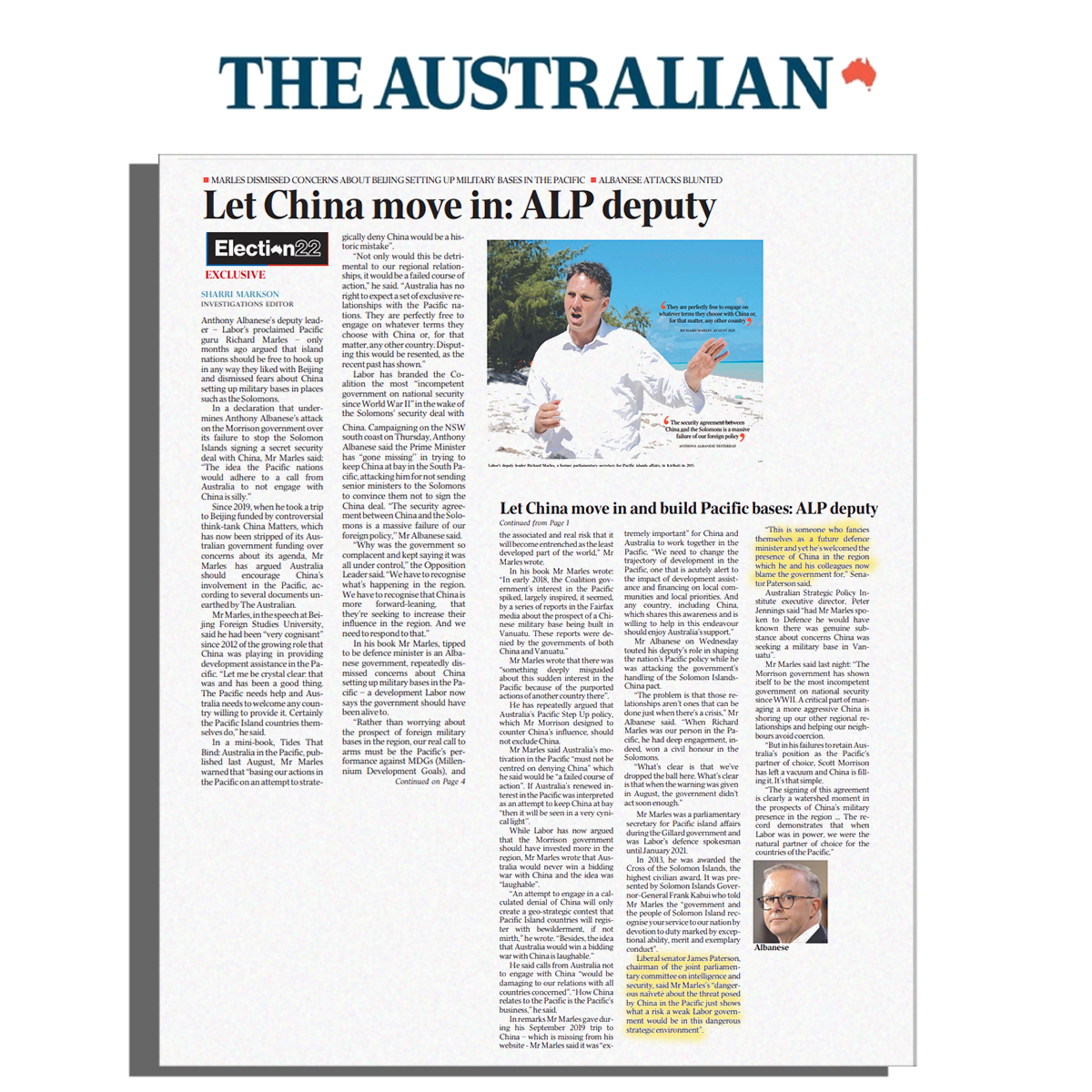 Anthony Albanese’s deputy leader – Labor’s proclaimed Pacific guru Richard Marles – only months ago argued that island ­nations should be free to hook up in any way they liked with Beijing and dismissed fears about China setting up military bases in places such as the Solomons.

In a declaration that undermines Anthony Albanese’s attack on the Morrison government over its failure to stop the Solomon ­Islands signing a secret security deal with China, Mr Marles said: “The idea the Pacific nations would adhere to a call from ­Australia to not engage with China is silly.”

Since 2019, when he took a trip to Beijing funded by controversial think-tank China Matters, which has now been stripped of its Australian government funding over concerns about its agenda, Mr Marles has argued Australia should encourage China’s ­involvement in the Pacific, according to several documents unearthed by The Australian.

Mr Marles, in the speech at Beijing Foreign Studies University, said he had been “very cognisant” since 2012 of the growing role that China was playing in providing development assistance in the Pacific. “Let me be crystal clear: that was and has been a good thing. The Pacific needs help and Australia needs to welcome any country willing to provide it. Certainly the Pacific Island countries themselves do,” he said.

In a mini-book, Tides That Bind: Australia in the Pacific, published last August, Mr Marles warned that “basing our actions in the Pacific on an attempt to strategically deny China would be a historic mistake’’.

“Not only would this be detrimental to our regional relationships, it would be a failed course of action," he said. “Australia has no right to expect a set of exclusive relationships with the Pacific nations. They are perfectly free to engage on whatever terms they choose with China or, for that matter, any other country. Disputing this would be resented, as the recent past has shown.”

Labor has branded the Coalition the most “incompetent government on national security since World War II” in the wake of the Solomons’ security deal with China. Campaigning on the NSW south coast on Thursday, ­Anthony Albanese said the Prime Minister has “gone missing’’ in trying to keep China at bay in the South Pacific, attacking him for not sending senior ministers to the Solomons to convince them not to sign the China deal. “The security agreement between China and the Solomons is a massive failure of our foreign policy,’’ Mr Albanese said.

In his book Mr Marles, tipped to be defence minister in an Albanese government, repeatedly dismissed concerns about China setting up military bases in the Pacific – a development Labor now says the government should have been alive to.

“Rather than worrying about the prospect of foreign military bases in the region, our real call to arms must be the Pacific’s performance against MDGs (Millennium Development Goals), and the associated and real risk that it will become entrenched as the least developed part of the world,” Mr Marles wrote.

In his book Mr Marles wrote: “In early 2018, the Coalition government’s interest in the Pacific spiked, largely inspired, it seemed, by a series of reports in the Fairfax media about the prospect of a Chinese military base being built in Vanuatu. These reports were denied by the governments of both China and Vanuatu.”

Mr Marles wrote that there was “something deeply misguided about this sudden interest in the Pacific because of the purported actions of another country there”.

He has repeatedly argued that Australia’s Pacific Step Up policy, which Mr Morrison designed to counter China’s influence, should not exclude China.

Mr Marles said Australia’s motivation in the Pacific “must not be centred on denying China” which he said would be “a failed course of action”. If Australia’s renewed interest in the Pacific was interpreted as an attempt to keep China at bay “then it will be seen in a very cynical light’’.

While Labor has now argued that the Morrison government should have invested more in the region, Mr Marles wrote that Australia would never win a bidding war with China and the idea was “laughable”.

“An attempt to engage in a calculated denial of China will only create a geo-strategic contest that Pacific Island countries will register with bewilderment, if not mirth,” he wrote. “Besides, the idea that Australia would win a bidding war with China is laughable.”

He said calls from Australia not to engage with China “would be damaging to our relations with all countries concerned”. “How China relates to the Pacific is the Pacific’s business,” he said.

In remarks Mr Marles gave during his September 2019 trip to China – which is missing from his website - Mr Marles said it was “extremely important” for China and Australia to work together in the Pacific. “We need to change the trajectory of development in the Pacific, one that is acutely alert to the impact of development assistance and financing on local communities and local priorities. And any country, including China, which shares this awareness and is willing to help in this endeavour should enjoy Australia’s support.”

Mr Albanese on Wednesday touted his deputy’s role in shaping the nation’s Pacific policy while he was attacking the government’s handling of the Solomon Islands-China pact.

“The problem is that those relationships aren’t ones that can be done just when there’s a crisis,” Mr Albanese said. “When Richard Marles was our person in the Pacific, he had deep engagement, indeed, won a civil honour in the Solomons.

Mr Marles was a parliamentary secretary for Pacific island affairs during the Gillard government and was Labor’s defence spokesman until January 2021.

In 2013, he was awarded the Cross of the Solomon Islands, the highest civilian award. It was presented by Solomon Islands Governor-General Frank Kabui who told Mr Marles the “government and the people of Solomon Island recognise your service to our nation by devotion to duty marked by exceptional ability, merit and exemplary conduct”.

“Clearly, under this government, they have failed to do that. I mean, when we were in government, we were the natural partner of choice. When I was doing this job, it was Australia that was winning the strategic contest with China. I would not have imagined that this government could have stuffed it up so badly that on their watch you would see this agreement being signed between China and Solomon Islands and it is definitely a watershed which absolutely raises the threat, certainly raises my anxiety about Chinese military presence in the region. But what that speaks to is total failure of the Morrison government to make themselves the partner of choice.’’

Liberal senator James Paterson, chairman of the joint parliamentary committee on intelligence and security, said Mr Marles’s “dangerous naïveté about the threat posed by China in the Pacific just shows what a risk a weak Labor government would be in this dangerous strategic environment”.

“This is someone who fancies themselves as a future defence minister and yet he’s welcomed the presence of China in the region which he and his colleagues now blame the government for,” Senator Paterson said.

Australian Strategic Policy Institute executive director, Peter Jennings said “had Mr Marles spoken to Defence he would have known there was genuine substance about concerns China was seeking a military base in Vanuatu”.

Mr Marles said last night: “The Morrison government has shown itself to be the most incompetent government on national security since WWII. A critical part of managing a more aggressive China is shoring up our other regional relationships and helping our neighbours avoid coercion.

“But in his failures to retain Australia’s position as the Pacific’s partner of choice, Scott Morrison has left a vacuum and China is filling it. It’s that simple.

“The signing of this agreement is clearly a watershed moment in the prospects of China’s military presence in the region … The record demonstrates that when Labor was in power, we were the natural partner of choice for the countries of the Pacific.”