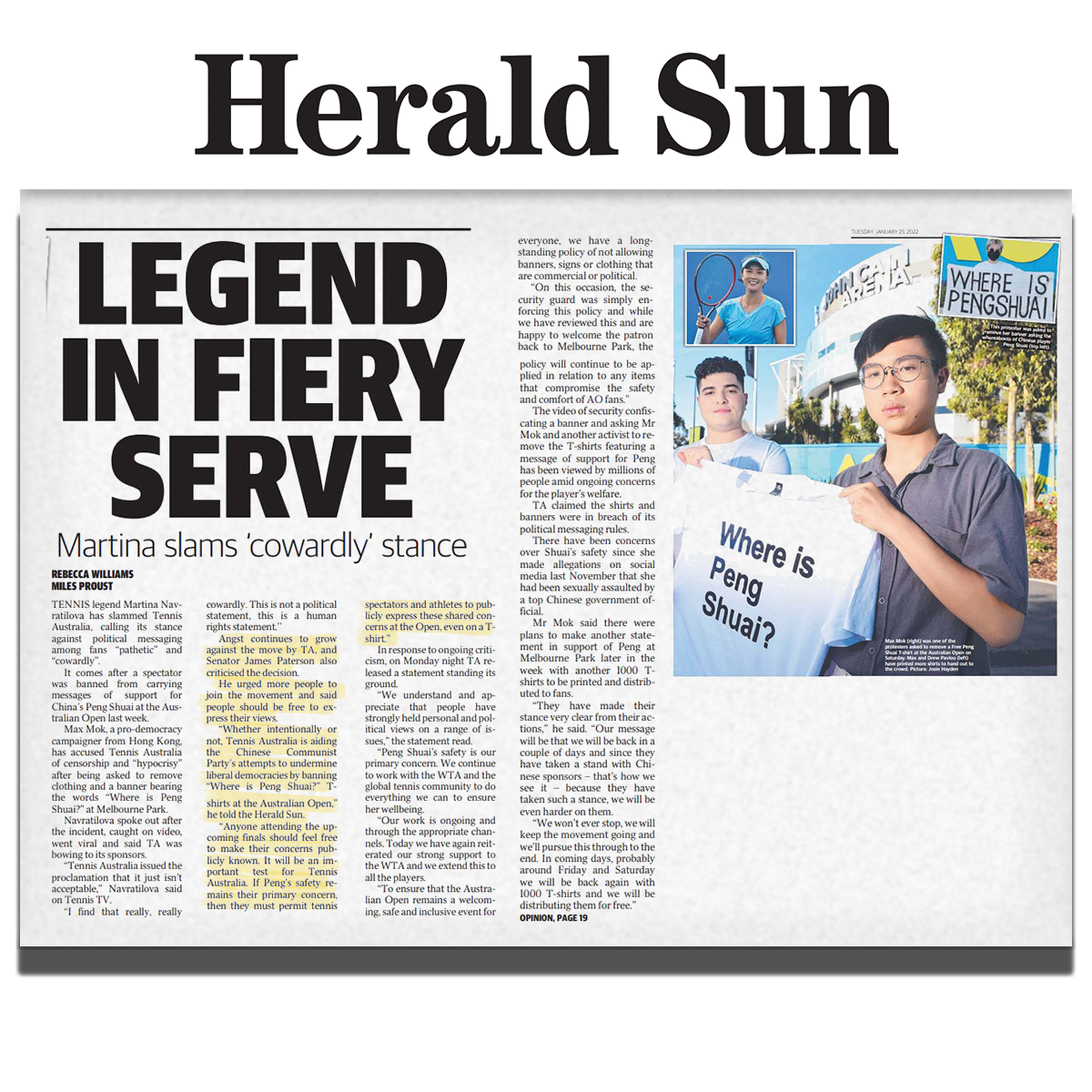 It comes after a spectator was banned from carrying messages of support for China’s Peng Shuai at the Australian Open last week. Max Mok, a pro-democracy campaigner from Hong Kong, has accused Tennis Australia of censorship and “hypocrisy”after being asked to remove clothing and a banner bearing the words “Where is Peng Shuai?” at Melbourne Park.

Navratilova spoke out after the incident, caught on video,went viral and said TA was bowing to its sponsors.

“I find that really, really cowardly. This is not a political statement, this is a human rights statement.’’

Angst continues to grow against the move by TA, and Senator James Paterson also criticised the decision. He urged more people to join the movement and said people should be free to express their views.

“Whether intentionally or not, Tennis Australia is aiding the Chinese Communist Party’s attempts to undermine liberal democracies by banning “Where is Peng Shuai?” T-shirts at the Australian Open,” he told the Herald Sun.

“Anyone attending the upcoming finals should feel free to make their concerns publicly known.

It will be an important test for Tennis Australia. If Peng’s safety remains their primary concern,then they must permit tennis spectators and athletes to publicly express these shared concerns at the Open, even on a T-shirt.”In response to ongoing criticism, on Monday night TA released a statement standing its ground.

“We understand and appreciate that people have strongly held personal and political views on a range of issues,” the statement read.

“Peng Shuai’s safety is our primary concern. We continue to work with the WTA and the global tennis community to do everything we can to ensure her wellbeing.

“Our work is ongoing and through the appropriate channels. Today we have again reiterated our strong support to the WTA and we extend this to all the players.

“To ensure that the Australian Open remains a welcoming, safe and inclusive event for everyone, we have a longstanding policy of not allowing banners, signs or clothing that are commercial or political.

“On this occasion, the security guard was simply enforcing this policy and while we have reviewed this and are happy to welcome the patron back to Melbourne Park, the policy will continue to be applied in relation to any items that compromise the safety and comfort of AO fans.”

The video of security confiscating a banner and asking Mr Mok and another activist to remove the T-shirts featuring a message of support for Peng has been viewed by millions of people amid ongoing concerns for the player’s welfare. TA claimed the shirts and banners were in breach of its political messaging rules.

There have been concerns over Shuai’s safety since she made allegations on social media last November that she had been sexually assaulted by top Chinese government official.

Mr Mok said there were plans to make another statement in support of Peng at Melbourne Park later in the week with another 1000 T-shirts to be printed and distributed to fans.“They have made their stance very clear from their actions,” he said.

“We won’t ever stop, we will keep the movement going and we’ll pursue this through to the end. In coming days, probably around Friday and Saturday we will be back again with1000 T-shirts and we will be distributing them for free.