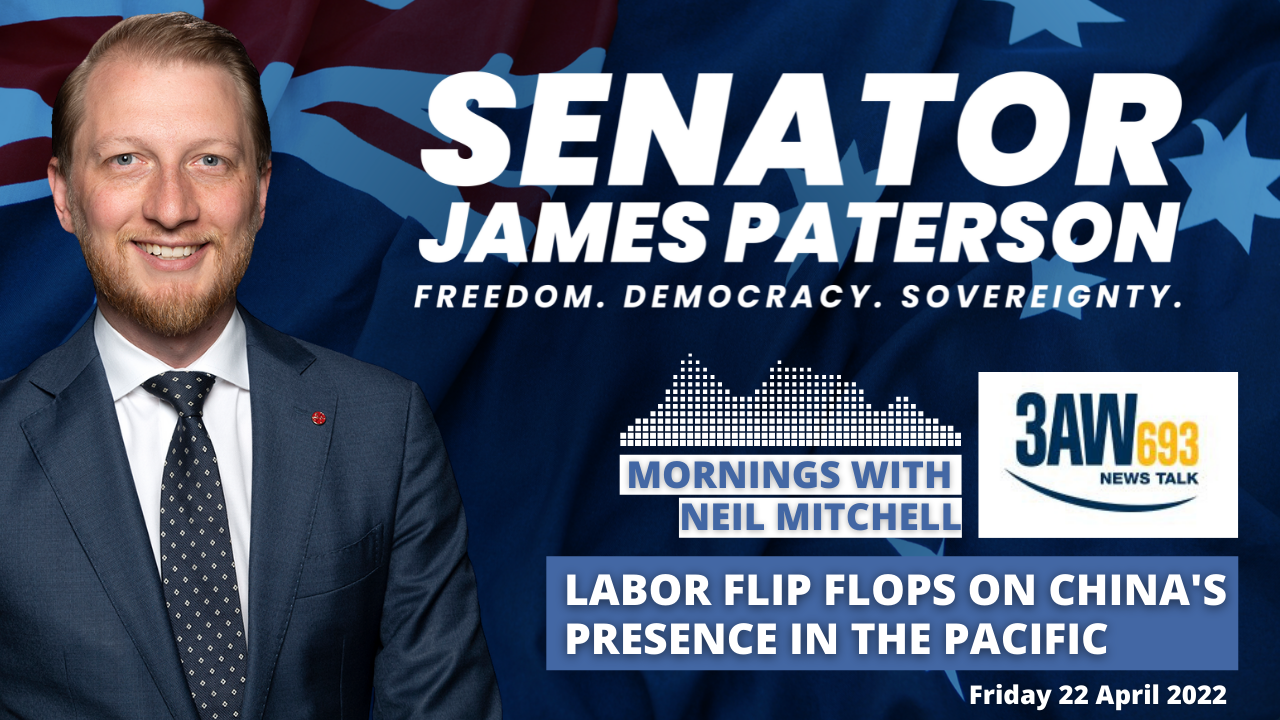 MITCHELL: Ok, I've noticed that you say somewhere on your website that this is a secret speech. It was actually reported at the time, you know?

SENATOR PATERSON: Yes. But if you go looking for that speech today, Neil, the only place you can find it is on my website, not on Richard Marles' website. Richard Marles' website documents very accurately all of his other speeches, but not this one. And that's important because he's now been caught out saying a different thing in China to what he says in Australia. When he was in China, he said it's a good thing to have China in the Pacific, and he welcomed them. And in Australia during an election campaign, he says there's something at fault of the Morrison Government because China is active in the Pacific. And he has to explain that contradiction and I don't think he did this morning.

SENATOR PATERSON: Neil, I've said many times including, I think on your program, that the lease of the Port of Darwin by the then Territory government should not have happened. And the federal government has since changed the law to make sure that it never happens again. And it was Scott Morrison, first as Treasurer and then as Prime Minister, who has led those changes to make sure it never happens again. So, I'm very proud of our record in national security. I'm very proud to have a debate that compares our record on defence to theirs, which shows that they cut defence spending to the lowest level since 1938, when they were last in office.

MITCHELL: Ok, well, you mentioned the speech in2019 or so which has been discussed, but not a lot of attention. It's more relevant now that China has done the deal with the Solomons. But didn't he also release a little booklet last year on it? Does that say the same thing? I think was September last year?

SENATOR PATERSON: That's right. He released effectively a pamphlet, a long pamphlet last year, Neil, which doubled down on these claims, which went even further in some respects and said that Australia shouldn't be trying to engage in a strategy of denial against China in the Pacific, that we should welcome them as an aid and development partner in the Pacific. And he even said that the Millennium Development Goals are a more important priority for the Pacific than stopping a Chinese military base, and that claims about military bases in the Pacific were overblown. I mean this just shows how naive he is. I mean, Australian intelligence has known for years that it was an objective of the Chinese government to establish a military presence in the region. And Richard Marles was out there, blithely denying that that was a risk at all.

MITCHELL: Ok. Well, what should happen? What needs to be done here? From your point of view?

SENATOR PATERSON: Well, we have to work very respectfully with the government of Solomon Islands. They are a sovereign government and they are entitled to make their own decisions in their own national interest. And they don't welcome Australians or anyone else coming and lecturing them. We have to work with them, and I think it's a real mistake the way in which Penny Wong and Anthony Albanese have sought to politicise this in the last few days, particularly because the Labor Party has previously cried bipartisanship, if ever their record on national security was criticised....

MITCHELL: Fair go. Fair go. I mean you're politicising it here and now, talking about what Richard Marles has done.

MITCHELL: Well, what do you want Richard Marles or Anthony Albanese to do? What do they need to do now?

SENATOR PATERSON: Well, I think they need to acknowledge that Richard Marles' comments were wrong, that they were mistaken. He should apologise for them and retract them and say that in fact, China is our strategic competitor in the Pacific and it is not in Australia's national interest to encourage them into the Pacific and to establish military bases.

MITCHELL: Why is this important to me sitting in the traffic on the Monash on the way in from Berwick? Why do I care?

SENATOR PATERSON: Well, Neil, it's very serious indeed, and anyone who's familiar with the history of the war in the Pacific will understand why the Solomons and the South Pacific in particular are important to Australia. It was an objective of the Imperial Japanese navy at the time to deny the peaceful access of the US naval fleet from the west coast of the United States to the east coast of Australia. That was a key strategic objective of theirs and I don't think it's a coincidence that the Chinese government is seeking to establish the same military presence on a really critical naval supply line for Australia.

MITCHELL: Did they bribe their way into this?

SENATOR PATERSON: Well, it's pretty clear, Neil, that China doesn't play by the same rules that Australia does. We are a liberal democracy governed by the rule of law, and there are things that we are not prepared to do which the Chinese government is very comfortable doing in the Solomons and elsewhere in the Pacific.

MITCHELL: Can this be undone?

SENATOR PATERSON: Well, the Prime Minister Sogavare has made some very important commitments after the draft agreement was leaked to the public. He promised that there would be no permanent Chinese military presence and there would be no Chinese military bases, and that's a commitment he wasn't just making to Australia and other people, other countries in the region, but a commitment he made to the people of the Solomon Islands who I don't think would welcome a permanent Chinese military presence on their sovereign territory. And so, he needs to live up to those commitments he's made.

MITCHELL: Thank you very much, Senator James Paterson, Liberal Senator, Victoria, Chair of the Parliamentary Joint Committee on Intelligence and Security and he's been beating the drum about China for some time, and understandably so.