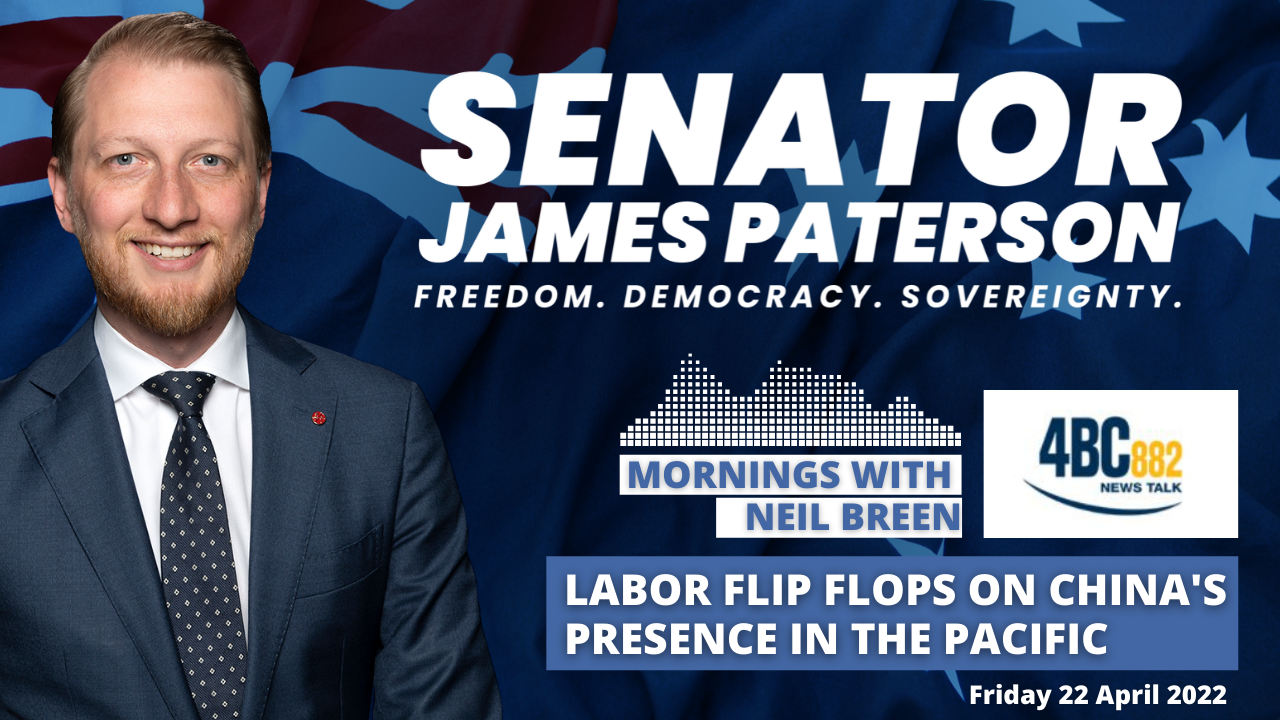 INTERVIEW WITH NEIL BREEN, 4BC

NEIL BREEN: Senator James Paterson, Chair of the Joint Committee on Intelligence and Security for the Federal Government is on the line. Good morning, Senator Paterson.

BREEN: These comments by Richard Marles that have been shown and exposed by The Australian today and then him basically backing them in on the Today show today. Quite serious stuff, really.

SENATOR PATERSON: Incredibly serious Neil, that's exactly right. And the Labor Party has very serious questions to answer today about the very obvious contradiction between what Richard Marles has been saying for years, including in a speech in China in Beijing, where he welcomes China's involvement in the Pacific, and their current policy, which they say is just as strong and just as supportive of the government as the Liberal Party is. Well I think the record is clear, that in fact, the Labor Party has consistently had weak positions on China, and these revelations are just more of evidence of that.

BREEN: Yeah, very weak positions. Some of those things, he said. So he said this, Richard Marles in recent months, the idea that Pacific nations would adhere to a call from Australia to not engage with China is silly. So that was one of the main things that he's quoted as saying in recent times. And we know that in 2019, he took a trip to Beijing, funded bythe controversial think tank China Matters, which has now been stripped of its Australian Government funding over concerns about its agenda. And he went on those trips and he said several things like; let me be crystal clear, that was, this is China being involved in providing assistance in the Pacific; let me be crystal clear, that was and has been a good thing. The Pacific needs help and Australia needs to welcome any country willing to provide it. Certainly, the Pacific Island countries themselves do. Australia should never welcome China getting involved in that way in the Pacific, just as same as they wouldn't pretty much welcome it, Senator James Paterson, if you guys lobbed up to Taiwan and said, hey, we're going to put some troops here.

SENATOR PATERSON: Well, that's a good point, and I think it's really instructive that Richard Marles says one thing when he's in China and something different when he's in Australia. And the interesting thing about that speech he gave in China is it never appeared on his website. In fact...

SENATOR PATERSON: … the only place you can read that speech today is on my website because I found it and I put it up. What was Richard Marles trying to hide? Why does he never publicise that on his website? And why did he say one thing when he's in Beijing and a different thing when he's in Australia? I think it reflects very poorly on them and their credentials on national security and in an uncertain time, you know, can we really risk as a country a weak Labor Government? I don't think so.

BREEN: I think their former Senator Sam Dastyari fell on his sword for the same, didn't he?

SENATOR PATERSON: That's right. In fact, Sam Dastyari was articulating the Chinese Government's position at a press conference next to a Chinese political donor instead of the Labor Party's position on this. And Richard Marles has been advocating what appears to be a position very contradictory to the Labor Party's stated current policy when he was in China on that trip funded by a Chinese friendly think tank.

BREEN: Senator Paterson could I also get your take, there's this other story today. It's also in The Australian, so it's got a couple of them today, where Xi Jinping has said some rather provocative stuff. He's basically taking the Russian line, saying it's a new, it's a new kind of theory about defending your country and it allows you to spread out in and around your region willy nilly. And it's the same defence chart that Russia used to go into the Ukraine. This language from Xi Jinping just kind of keeps upping the rhetoric.

SENATOR PATERSON: It does and it's exactly what our Prime Minister has been warning about for some time when he talks about the risk of rising autocracies and the fact that they're working more closely together than ever before. In that same speech, Xi Jinping fairly plainly outlined his ambition to dismantle the United States alliance network in the Indo-Pacific, and that would be enormously detrimental to our interests. And we know that the Chinese Government has changed its posture to the region in the last five years. The militarisation of the South China Sea, the takeover of Hong Kong, the threats towards Taiwan. We're in a very serious times Neil and that requires a government that's got strong plans for national security and invests in defence. And we know that Labor's record, it was very poor. They slashed defence spending when they were last in government to the lowest levels since1938. I have no confidence that they wouldn't do the same thing again.

BREEN: We're at a point of no return though aren't we with China? Unless Xi Jinping falls off the perch.

SENATOR PATERSON: I think the situation we're in with China is going to be the case for some years to come. The economic coercion they've against our country, the threats they make into the region, the interference and espionage in our country, which the ASIO Director-General has said is at the highest levels that we've seen since the end of the Cold War. These are things that are not going away anytime soon. And so what that requires from Australia is strength, it requires a very serious military capability, it requires us to be very clear about our intent and that's what this government has delivered.

BREEN: Senator James Paterson, one thing that is for certain, the Government, the Coalition Government has spent a fortune, a fortune upping our defence capabilities. But at the same time, we've got to be able to have a bit of a laugh when it comes to politics, so to the break and I'm going to leave you listening as well. I'm going to play you, Senator, I'm going play you, Bob Katter on Q&A last night where he took the government to task. Look, we basically should sit back and just enjoy it for what it is. Senator Paterson, thanks for your time. Here's Katter.