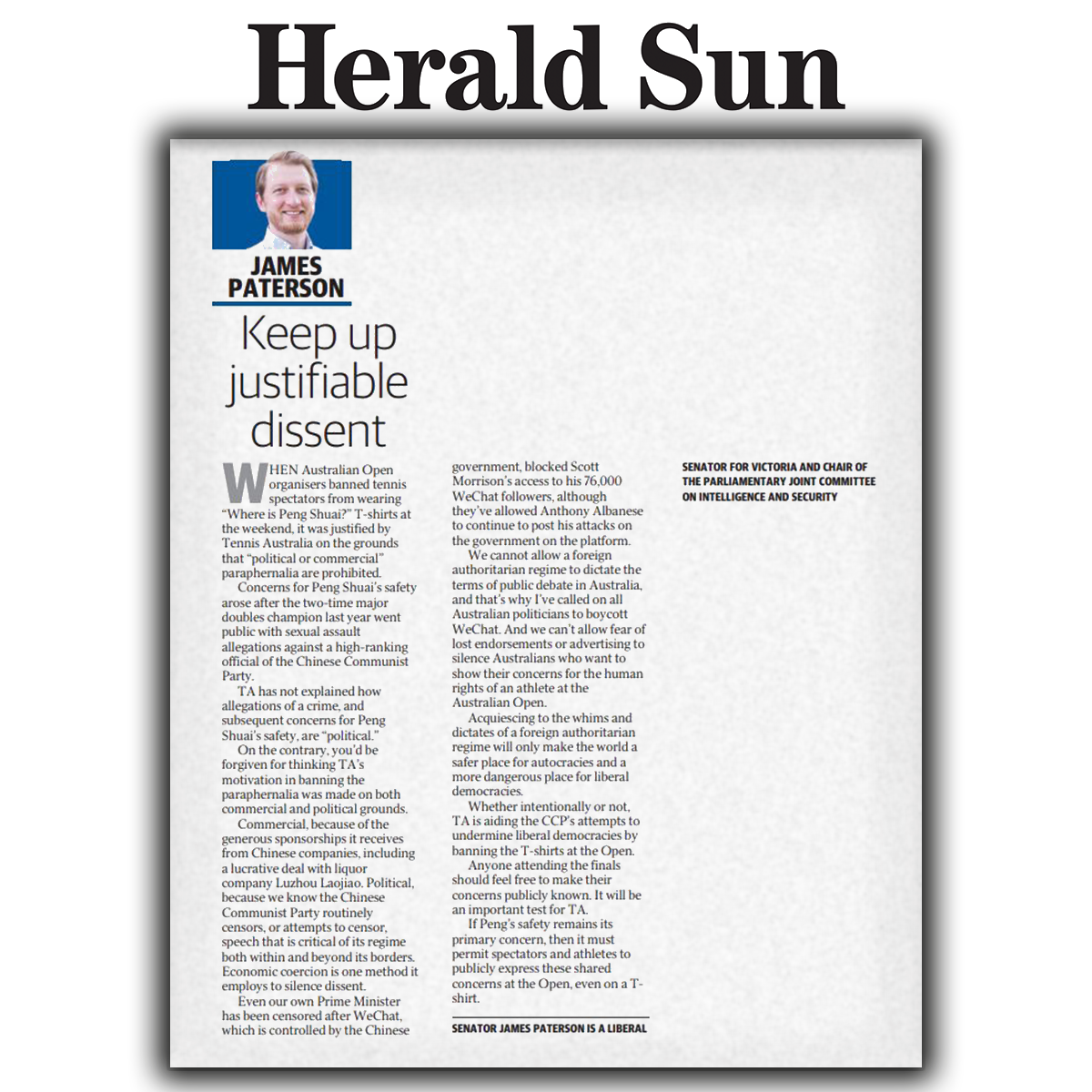 When Australian Open organisers banned tennis spectators from wearing “Where is Peng Shuai?” T-shirts at the weekend, it was justified by Tennis Australia on the grounds that “political or commercial” paraphernalia are prohibited.

Tennis Australia has not explained how allegations of a crime, and subsequent concerns for Peng Shuai’s safety, are “political.”

On the contrary, you’d be forgiven for thinking Tennis Australia’s motivation in banning the paraphernalia was made on both commercial and political grounds.

Commercial, because of the generous sponsorships it receives from Chinese companies, including a lucrative deal with Chinese liquor company Luzhou Laojiao.

And political, because we know the Chinese Communist Party routinely censors, or attempts to censor, speech that is critical of its regime both within and beyond its borders. Economic coercion is just one method it employs to silence dissent.

Even our own Prime Minister has been censored after WeChat, which is controlled by the Chinese government, blocked Scott Morrison’s access to his 76,000 WeChat followers, although they’ve allowed Anthony Albanese to continue to post his attacks on the government on the platform.

We cannot allow a foreign authoritarian regime to dictate the terms of public debate in Australia, and that’s why I’ve called on all Australian politicians to boycott WeChat.

And we can’t allow fear of lost endorsements or advertising to silence Australians who want to show their concerns for the human rights of an athlete at the Australian Open.

Acquiescing to the whims and dictates of a foreign authoritarian regime will only make the world a safer place for autocracies and a more dangerous place for liberal democracies.

Whether intentionally or not, Tennis Australia is aiding the Chinese Communist Party’s attempts to undermine liberal democracies by banning “Where is Peng Shuai?” T-shirts at the Australian Open.

Anyone attending the upcoming finals should feel free to make their concerns publicly known. It will be an important test for Tennis Australia. If Peng’s safety remains their primary concern, then they must permit tennis spectators and athletes to publicly express these shared concerns at the Open, even on a t-shirt.