Here's how to grow 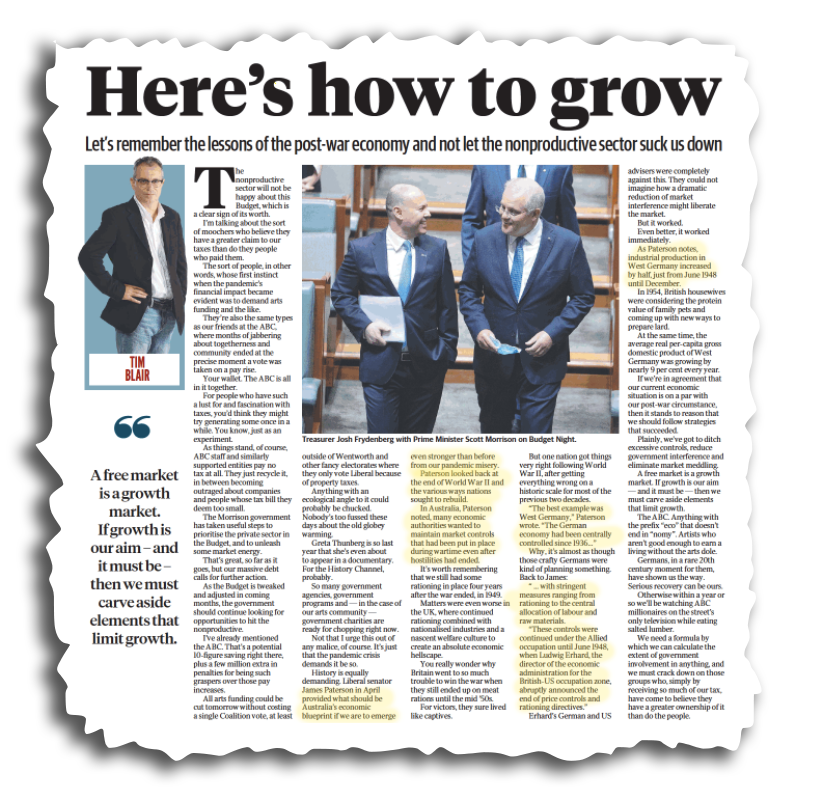 Let's remember the lessons of the post-war economy and not let the nonproductive sector suck us down.The nonproductive sector will not be happy about this Budget, which is a clear sign of its worth. I'm talking about the sort of moochers who believe they have a greater claim to our taxes than do they people who paid them.The sort of people, in other words, whose first instinct when the pandemic's financial impact became evident was to demand arts funding and the like.They're also the same types as our friends at the ABC, where months of jabbering about togetherness and community ended at the precise moment a vote was taken on a pay rise. Your wallet.The ABC is all in it together. For people who have such a lust for and fascination with taxes, you'd think they might try generating some once in a while. You know, just as an experiment.As things stand, of course, ABC staff and similarly supported entities pay no tax at all. They just recycle it, in between becoming outraged about companies and people whose tax bill they deem too small.The Morrison government has taken useful steps to prioritise the private sector in the Budget, and to unleash some market energy. That's great, so far as it goes, but our massive debt calls for further action.As the Budget is tweaked and adjusted in coming months, the government should continue looking for opportunities to hit the nonproductive.I've already mentioned the ABC. That's a potential 10-figure saving right there, plus a few million extra in penalties for being such graspers over those pay increases.All arts funding could be cut tomorrow without costing a single Coalition vote, at least outside of Wentworth and other fancy electorates where they only vote Liberal because of property taxes.Anything with an ecological angle to it could probably be chucked. Nobody's too fussed these days about the old globey warming.Greta Thunberg is so last year that she's even about to appear in a documentary. For the History Channel, probably. So many government agencies, government programs and in the case of our arts community government charities are ready for chopping right now.Not that I urge this out of any malice, of course. It's just that the pandemic crisis demands it be so. History is equally demanding.Liberal senator James Paterson in April provided what should be Australia's economic blueprint if we are to emerge even stronger than before from our pandemic misery.Paterson looked back at the end of World War II and the various ways nations sought to rebuild.In Australia, Paterson noted, many economic authorities wanted to maintain market controls that had been put in place during wartime even after hostilities had ended.It's worth remembering that we still had some rationing in place four years after the war ended, in 1949.Matters were even worse in the UK, where continued rationing combined with nationalised industries and a nascent welfare culture to create an absolute economic hellscape.You really wonder why Britain went to so much trouble to win the war when they still ended up on meat rations until the mid '50s. For victors, they sure lived like captives.But one nation got things very right following World War II, after getting everything wrong on a historic scale for most of the previous two decades. "The best example was West Germany," Paterson wrote."The German economy had been centrally controlled since 1936." Why, it's almost as though those crafty Germans were kind of planning something.Back to James: "with stringent measures ranging from rationing to the central allocation of labour and raw materials."These controls were continued under the Allied occupation until June 1948, when Ludwig Erhard, the director of the economic administration for the British-US occupation zone, abruptly announced the end of price controls and rationing directives."Erhard's German and US advisers were completely against this. They could not imagine how a dramatic reduction of market interference might liberate the market. But it worked.Even better, it worked immediately.As Paterson notes, industrial production in West Germany increased by half, just from June 1948 until December.In 1954, British housewives were considering the protein value of family pets and coming up with new ways to prepare lard.At the same time, the average real per-capita gross domestic product of West Germany was growing by nearly 9 per cent every year. If we're in agreement that our current economic situation is on a par with our post-war circumstance, then it stands to reason that we should follow strategies that succeeded.Plainly, we've got to ditch excessive controls, reduce government interference and eliminate market meddling. A free market is a growth market. If growth is our aim and it must be then we must carve aside elements that limit growth. The ABC.Anything with the prefix "eco" that doesn't end in "nomy". Artists who aren't good enough to earn a living without the arts dole. Germans, in a rare 20th century moment for them, have shown us the way.Serious recovery can be ours. Otherwise within a year or so we'll be watching ABC millionaires on the street's only television while eating salted lumber. We need a formula by which we can calculate the extent of government involvement in anything, and we must crack down on those groups who, simply by receiving so much of our tax, have come to believe they have a greater ownership of it than do the people.A free market is a growth market. If growth is our aim and it must be then we must carve aside elements that limit growth.