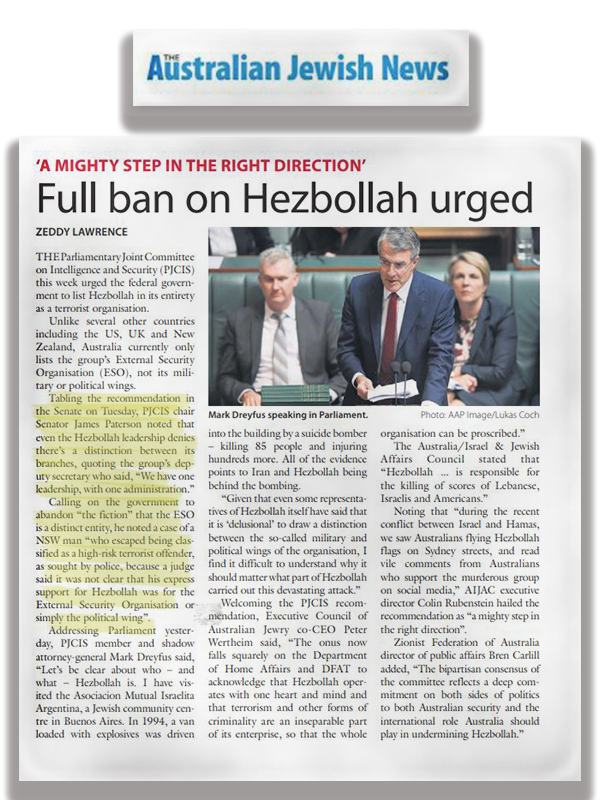 THE Parliamentary Joint Committee on Intelligence and Security (PJCIS) this week urged the federal government to list Hezbollah in its entirety as a terrorist organisation.

Unlike several other countries including the US, UK and New Zealand, Australia currently only lists the group’s External Security Organisation (ESO), not its military or political wings.

Tabling the recommendation in the Senate on Tuesday, PJCIS chair Senator James Paterson noted that even the Hezbollah leadership denies there’s a distinction between its branches, quoting the group’s deputy secretary who said, “We have one leadership, with one administration.”

Calling on the government to abandon “the fiction” that the ESO is a distinct entity, he noted a case of a NSW man “who escaped being classified as a high-risk terrorist offender, as sought by police, because a judge said it was not clear that his express support for Hezbollah was for the External Security Organisation or simply the political wing”.

Addressing Parliament yesterday, PJCIS member and shadow attorney-general Mark Dreyfus said, “Let’s be clear about who – and what – Hezbollah is. I have visited the Asociacion Mutual Israelita Argentina, a Jewish community centre in Buenos Aires. In 1994, a van loaded with explosives was driven into the building by a suicide bomber – killing 85 people and injuring hundreds more. All of the evidence points to Iran and Hezbollah being behind the bombing.

“Given that even some representatives of Hezbollah itself have said that it is ‘delusional’ to draw a distinction between the so-called military and political wings of the organisation, I find it difficult to understand why it should matter what part of Hezbollah carried out this devastating attack.”

Welcoming the PJCIS recommendation, Executive Council of Australian Jewry co-CEO Peter Wertheim said, “The onus now falls squarely on the Department of Home Affairs and DFAT to acknowledge that Hezbollah operates with one heart and mind and that terrorism and other forms of criminality are an inseparable part of its enterprise, so that the whole organisation can be proscribed.”

The Australia/Israel & Jewish Affairs Council stated that “Hezbollah … is responsible for the killing of scores of Lebanese, Israelis and Americans.”

Noting that “during the recent conflict between Israel and Hamas, we saw Australians flying Hezbollah flags on Sydney streets, and read vile comments from Australians who support the murderous group on social media,” AIJAC executive director Colin Rubenstein hailed the recommendation as “a mighty step in the right direction”.

Zionist Federation of Australia director of public affairs Bren Carlill added, “The bipartisan consensus of the committee reflects a deep commitment on both sides of politics to both Australian security and the international role Australia should play in undermining Hezbollah.”