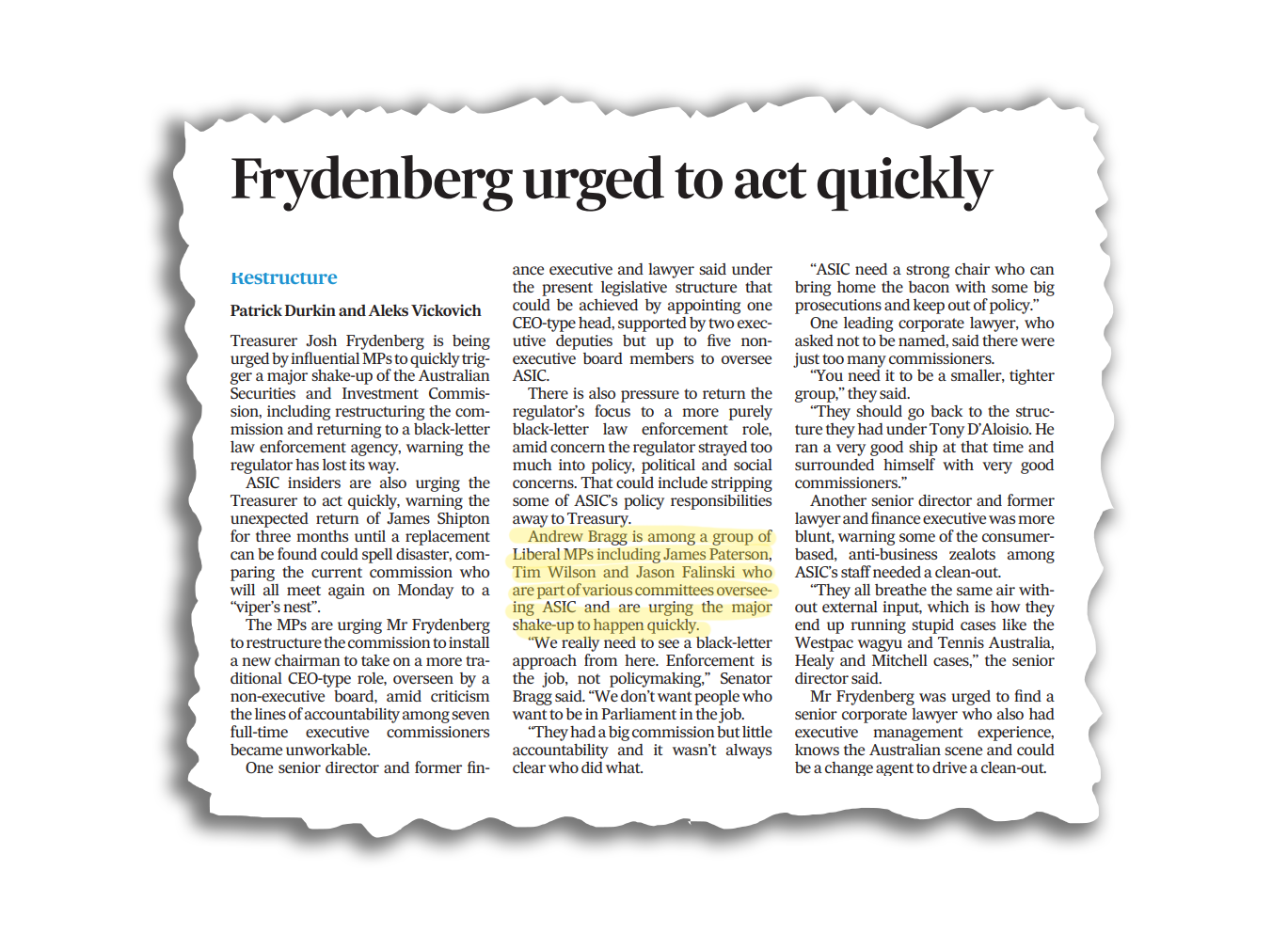 Treasurer Josh Frydenberg is being urged by influential MPs to quickly trigger a major shake-up of the Australian Securities and Investment Commission, including restructuring the commission and returning to a black-letter law enforcement agency, warning the regulator has lost its way.ASIC insiders are also urging the Treasurer to act quickly, warning the unexpected return of James Shipton for three months until a replacement can be found could spell disaster, comparing the current commission who will all meet again on Monday to a “vipers nest”.

The MPs are urging Mr Frydenberg to restructure the commission to install a new chairman to take on a more traditional CEO-type role, overseen by a non-executive board, amid criticism the lines of accountability among seven full-time executive commissioners became unworkable.

One senior director and former finance executive and lawyer said under the current legislative structure that could be achieved by appointing one CEO-type head, supported by two executive deputies but up to five non-executive board members to oversee ASIC.There is also pressure to return the regulator’s focus to a more purely black-letter law enforcement role, amid concern the regulator strayed too much into policy, political and social concerns. That could include stripping some of ASIC’s policy responsibilities away to Treasury.Andrew Bragg is among a group of Liberal MPs including James Paterson, Tim Wilson and Jason Falinski who are part of various committees overseeing ASIC and are urging the major shake-up to happen quickly.“We really need to see a black-letter approach from here. Enforcement is the job, not policymaking,” Senator Bragg said. “We don’t want people who want to be in Parliament in the job.

“They had a big commission but little accountability and it wasn’t always clear who did what.

“ASIC need a strong chair who can bring home the bacon with some big prosecutions and keep out of policy.”

One leading corporate lawyer, who asked not to be named, said there were just too many commissioners.“You need it to be a smaller, tighter group,” they said. “They should go back to the structure they had under Tony D’Aloisio. He ran a very good ship at that time and surrounded himself with very good commissioners.“ASIC was on fire back then. It worked well with industry and consulted while still not accepting any bullshit.“It’s a hard job. It should probably be a corporate lawyer with a bit of stature and who understands the market. Shipton didn’t. That would steady the ship.”Another senior director and former lawyer and finance executive was more blunt, warning some of the consumer-based, anti-business zealots among ASIC’s staff needed a clean-out.

“They all breathe the same air without external input, which is how they end up running stupid cases like the Westpac wagyu and Tennis Australia, Healy and Mitchell cases,” the senior director said.“Part of why ASIC has lost it’s way is it has gone from a black letter, corporate and securities law regulator into this airy-fairy culture and shrinks in the boardroom crap, more like a feel-good social adjudicator.”Mr Frydenberg was urged to find a senior corporate lawyer who also had executive management experience, knows the Australian scene and could be a change agent to drive a clean-out.“It’s got to be a lawyer and a tough, hard lawyer who has operated at the highest level of banking, corporate and securities law but who has also been a CEO or senior executive from business who understands the Australian scene and is capable of a clean-out,” the senior director said.