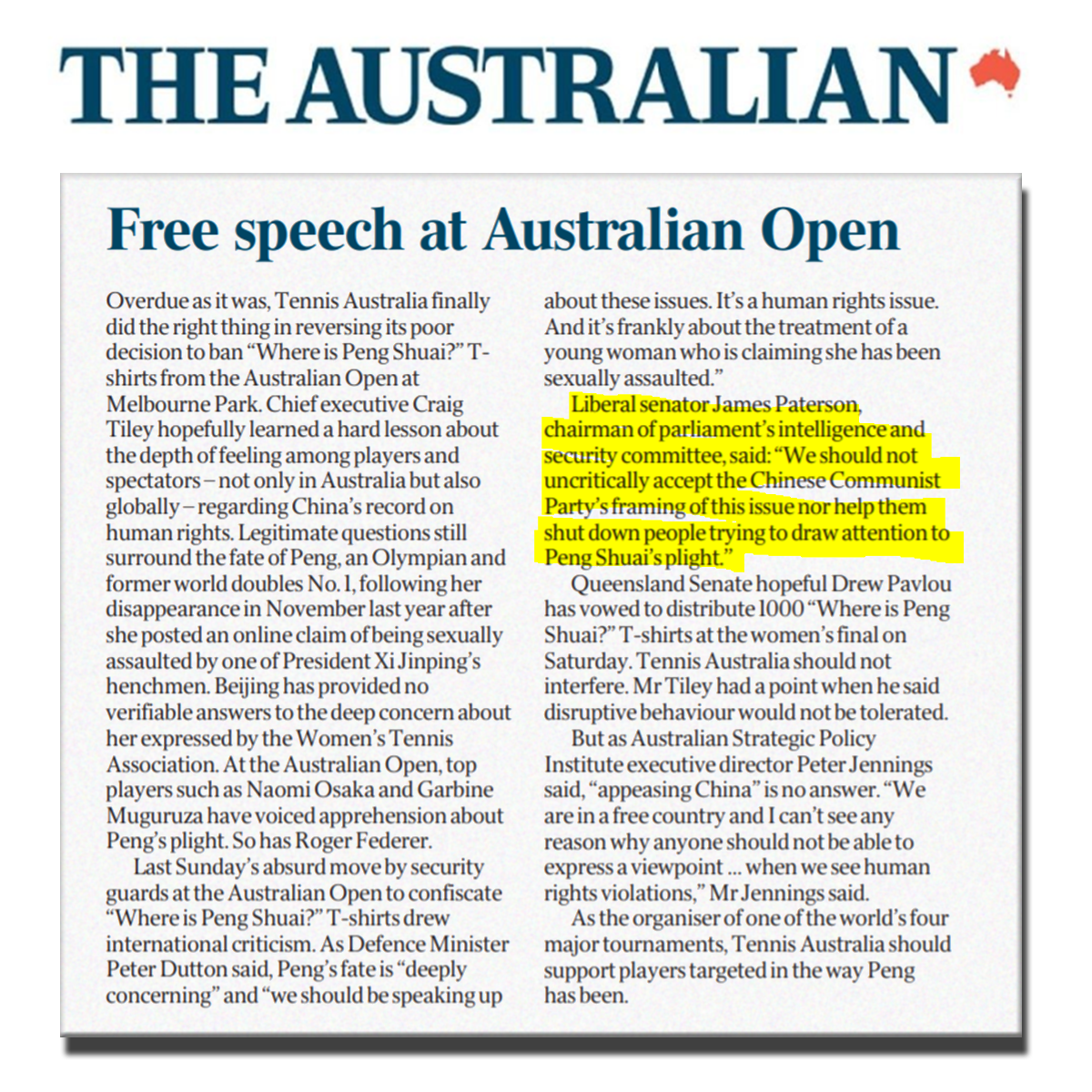 Overdue as it was, Tennis Australia finally did the right thing in reversing its poor decision to ban “Where is Peng Shuai?” T-shirts from the Australian Open at Melbourne Park. Chief executive Craig Tiley hopefully learned a hard lesson about the depth of feeling among players and spectators – not only in Australia but also globally – regarding China’s record on human rights. Legitimate questions still surround the fate of Peng, an Olympian and former world doubles No. 1, following her disappearance in November last year after she posted an online claim of being sexually assaulted by one of President Xi Jinping’s henchmen. Beijing has provided no verifiable answers to the deep concern about her expressed by the Women’s Tennis Association. At the Australian Open, top players such as Naomi Osaka and Garbine Muguruza have voiced apprehension about Peng’s plight. So has Roger Federer.

Last Sunday’s absurd move by security guards at the Australian Open to confiscate “Where is Peng Shuai?” T-shirts drew international criticism. As Defence Minister Peter Dutton said, Peng’s fate is “deeply concerning” and “we should be speaking up about these issues. It’s a human rights issue. And it’s frankly about the treatment of a young woman who is claiming she has been sexually assaulted.”

Liberal senator James Paterson, chairman of parliament’s intelligence and security committee, said: “We should not uncritically accept the Chinese Communist Party’s framing of this issue nor help them shut down people trying to draw attention to Peng Shuai’s plight.’’

Queensland Senate hopeful Drew Pavlou has vowed to distribute 1000 “Where is Peng Shuai?” T-shirts at the women’s final on Saturday. Tennis Australia should not interfere. Mr Tiley had a point when he said disruptive behaviour would not be tolerated.

But as Australian Strategic Policy Institute executive director Peter Jennings said, “appeasing China” is no answer. “We are in a free country and I can’t see any reason why anyone should not be able to express a viewpoint … when we see human rights violations,” Mr Jennings said.

As the organiser of one of the world’s four major tournaments, Tennis Australia should support players targeted in the way Peng has been.