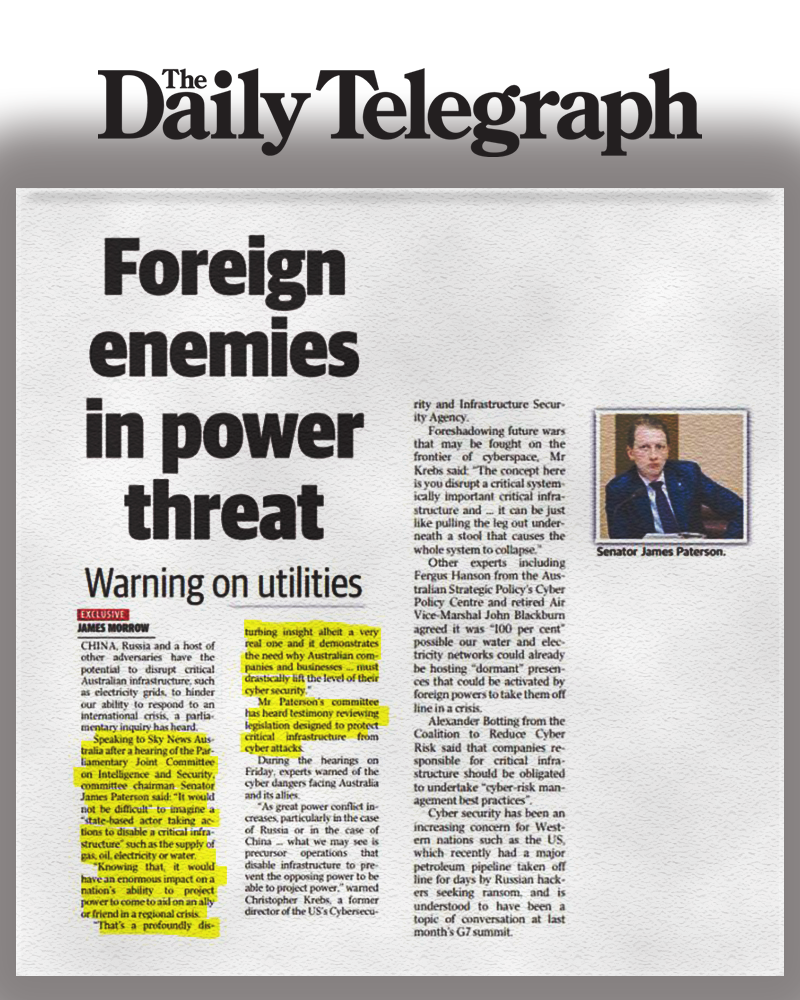 China, Russia and a host of other adversaries have the ­potential to disrupt critical Australian infrastructure, such as electricity grids, to hinder our ability to respond to an international crisis, a parliamentary inquiry has heard.

Speaking to Sky News Australia after a hearing of the Parliamentary Joint Committee on Intelligence and Security, committee chairman Senator James Paterson said: “It would not be difficult” to imagine a “state-based actor taking actions to disable a critical infrastructure” such as the supply of gas, oil, electricity or water.

“Knowing that, it would have an enormous impact on a nation’s ability to project power to come to aid on an ally or friend in a regional crisis.“That’s a profoundly disturbing insight albeit a very real one and it demonstrates the need why Australian companies and businesses … must drastically lift the level of their cyber security.”Mr Paterson’s committee has heard testimony reviewing legislation designed to protect critical infrastructure from cyber attacks.During the hearings on ­Friday, experts warned of the cyber dangers facing Australia and its allies.“As great power conflict increases, particularly in the case of Russia or in the case of China … what we may see is precursor operations that ­disable infrastructure to prevent the opposing power to be able to project power,” warned Christopher Krebs, a former director of the US’s Cybersecurity and Infrastructure Security Agency.Foreshadowing future wars that may be fought on the frontier of cyberspace, Mr Krebs said: “The concept here is you disrupt a critical systemically important critical infrastructure and … it can be just like pulling the leg out underneath a stool that causes the whole system to collapse.”Other experts including Fergus Hanson from the Australian Strategic Policy’s Cyber Policy Centre and retired Air Vice-Marshal John Blackburn agreed it was “100 per cent” possible our water and electricity networks could already be hosting “dormant” presences that could be activated by foreign powers to take them off line in a crisis.Alexander Botting from the Coalition to Reduce Cyber Risk said that companies responsible for critical infrastructure should be obligated to undertake “cyber-risk management best practices”.Cyber security has been an increasing concern for Western nations such as the US, which recently had a major petroleum pipeline taken off line for days by Russian hackers seeking ransom, and is understood to have been a topic of conversation at last month’s G7 summit.