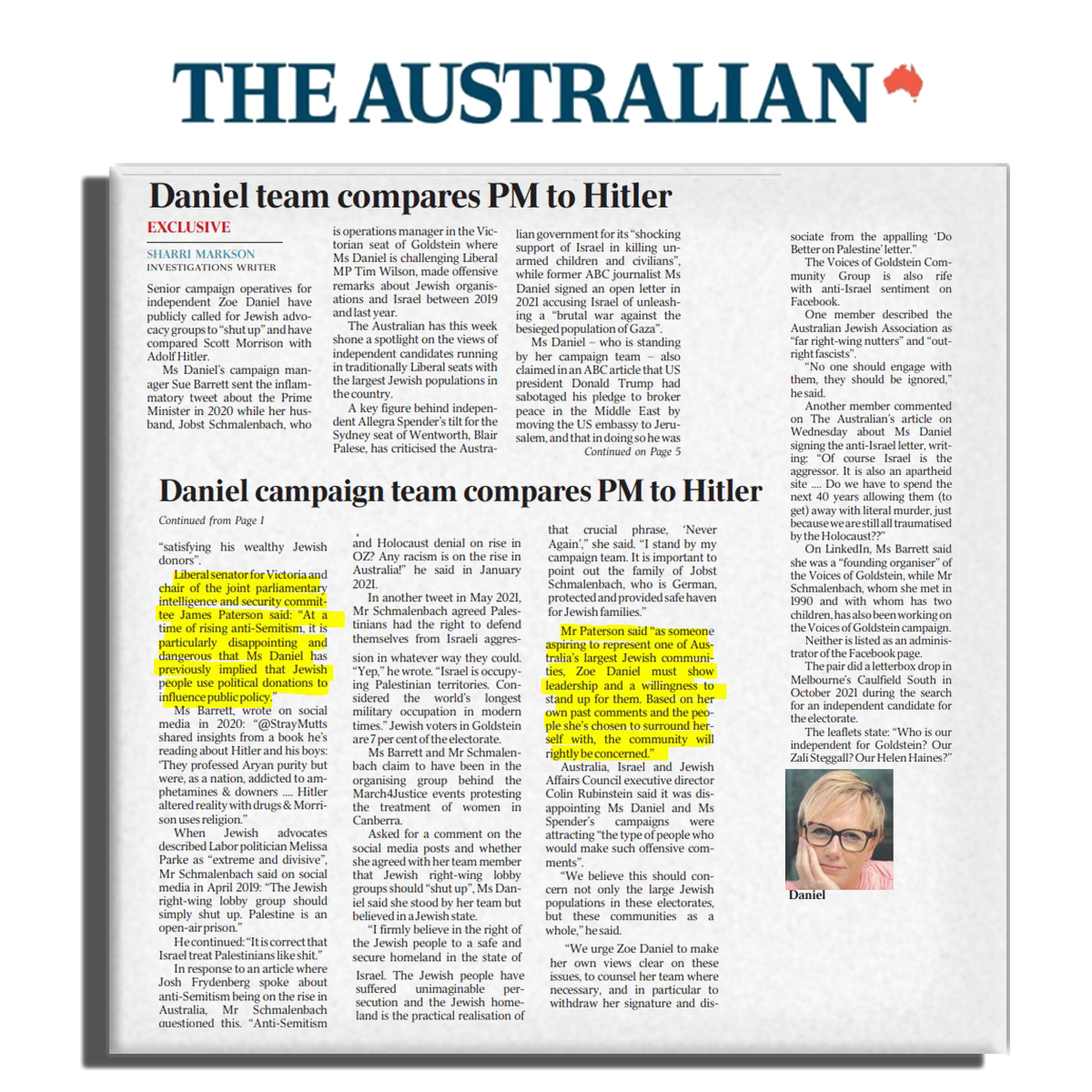 Senior campaign operatives for independent Zoe Daniel have publicly called for Jewish advocacy groups to “shut up” and have compared Scott Morrison with Adolf Hitler.

Ms Daniel’s campaign manager Sue Barrett sent the inflammatory tweet about the Prime Minister in 2020 while her husband, Jobst Schmalenbach, who is operations manager in the Victorian seat of Goldstein where Ms Daniel is challenging Liberal MP Tim Wilson, made offensive remarks about Jewish organisations and Israel between 2019 and last year.

The Australian has this week shone a spotlight on the views of independent candidates running in traditionally Liberal seats with the largest Jewish populations in the country.

A key figure behind independent Allegra Spender’s tilt for the Sydney seat of Wentworth, Blair Palese, has criticised the Australian government for its “shocking support of Israel in killing unarmed children and civilians”, while former ABC journalist Ms Daniel signed an open letter in 2021 accusing Israel of unleashing a “brutal war against the ­besieged population of Gaza”.

Ms Daniel – who is standing by her campaign team – also claimed in an ABC article that US president Donald Trump had sabotaged his pledge to broker peace in the Middle East by ­moving the US embassy to Jerusalem, and that in doing so he was “satisfying his wealthy Jewish ­donors”.

Liberal senator for Victoria and chair of the joint parliamentary intelligence and security committee James Paterson said: “At a time of rising anti-Semitism, it is particularly disappointing and dangerous that Ms Daniel has previously implied that Jewish people use political donations to influence public policy.”

Ms Barrett, wrote on social media in 2020: “@StrayMutts shared insights from a book he’s reading about Hitler and his boys: ‘They professed Aryan purity but were, as a nation, addicted to amphetamines & downers …. Hitler altered reality with drugs & Morrison uses religion.”

He continued: “It is correct that Israel treat Palestinians like shit.”

In another tweet in May 2021, Mr Schmalenbach agreed Palestinians had the right to defend themselves from Israeli aggression in whatever way they could. “Yep,” he wrote. “Israel is occupying Palestinian territories. Considered the world’s longest military occupation in modern times.” Jewish voters in Goldstein are 7 per cent of the ­electorate.

Ms Barrett and Mr Schmalenbach claim to have been in the ­organising group behind the March4Justice events protesting the treatment of women in ­Canberra.

Asked for a comment on the social media posts and whether she agreed with her team member that Jewish right-wing lobby groups should “shut up”, Ms Daniel said she stood by her team but believed in a Jewish state.

“I firmly believe in the right of the Jewish people to a safe and ­secure homeland in the state of ­Israel. The Jewish people have suffered unimaginable persecution and the Jewish homeland is the practical realisation of that crucial phrase, ‘Never Again’,” she said. “I stand by my campaign team. It is important to point out the family of Jobst Schmalenbach, who is German, protected and provided safe haven for Jewish families.”

Mr Paterson said “as someone aspiring to represent one of Australia’s largest Jewish communities, Zoe Daniel must show leadership and a willingness to stand up for them. Based on her own past comments and the people she’s chosen to surround herself with, the community will rightly be concerned.”

Australia, Israel and Jewish ­Affairs Council executive director Colin Rubinstein said it was dis­appointing Ms Daniel and Ms Spender’s campaigns were ­attracting “the type of people who would make such offensive comments”.

“We believe this should concern not only the large Jewish populations in these electorates, but these communities as a whole,” he said.

“We urge Zoe Daniel to make her own views clear on these ­issues, to counsel her team where necessary, and in particular to withdraw her signature and dissociate from the appalling ‘Do Better on Palestine’ letter.”

The Voices of Goldstein Community Group is also rife with anti-Israel sentiment on Facebook.

“No one should engage with them, they should be ignored,” he said.

Another member commented on The Australian’s article on Wednesday about Ms Daniel signing the anti-Israel letter, writing: “Of course Israel is the ­aggressor. It is also an apartheid site …. Do we have to spend the next 40 years allowing them (to get) away with literal murder, just because we are still all traumatised by the Holocaust??”

Neither is listed as an administrator of the Facebook page.

The pair did a letterbox drop in Melbourne’s Caulfield South in October 2021 during the search for an independent candidate for the electorate.

The leaflets state: “Who is our independent for Goldstein? Our Zali Steggall? Our Helen Haines?”