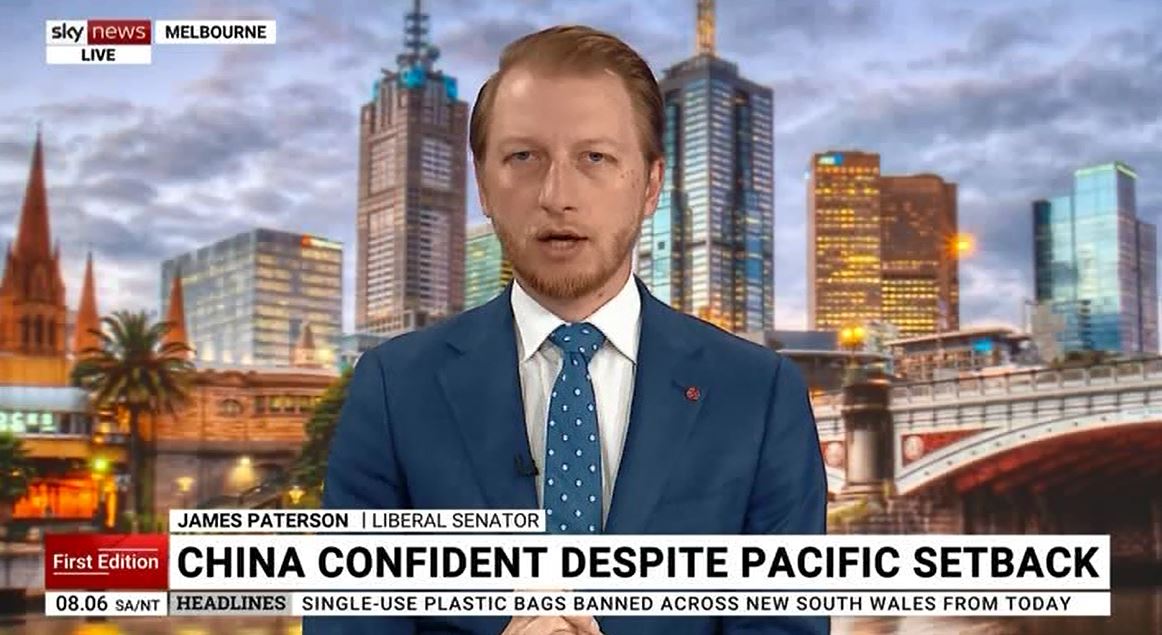 PETER STEFANOVIC: Let's bring it home now to Victoria.Joining us live is the Liberal Senator, James Paterson. Senator, good to see you. Thanks for your time this morning. So, I'll first start with your reaction earlier this week to when the Foreign Minister of China started to walk back those security arrangements or deals that he had hoped to achieve with these Pacific Island nations. Do you expect them to come back again?

JAMES PATERSON: Peter, the first and most important thing to say is it is, of course, the sovereign right of Pacific Island nations to enter into whatever international arrangements they want to. But I do welcome the fact that China has not been successful in this very ambitious deal. I agree with the assessment of John Lee of the Hudson Institute that this was frankly an overreach by the Chinese government that was not ever likely to succeed. And I think Pacific Island nations have made a very wise decision in their own national interest to not proceed with it, because it would have involved quite a lot of entanglement with the Chinese government, not just on trade, but on security. I don't doubt, though, that the Chinese government will continue to pursue these, and they will probably continue to pursue them at the bilateral level if they are not successful with an ambitious, multilateral agreement like this. And we need to remain on guard because that is potentially threatening to our national interests.

STEFANOVIC: So, so what about at a unilateral level,they can still do that, right? They could still aim to pick the islands off one by one down the track with its Belt and Road initiatives.

PATERSON: Well, that's right. And Wang Yi has signed a number of agreements bilaterally with Island nations during this trip,none as significant as the Solomon Islands agreement from a few months ago, but certainly ongoing bilateral engagements with the Pacific, and that is their right to enter into those arrangements when they think it's in the national interest. Where Australia and other countries would have concerns is where they traverse into security matters and certainly the joint policing and cybersecurity elements of the multilateral deal I think would have been troubling for all Pacific Island people as well as Australia.

STEFANOVIC: Does some credit need to be given to the new Foreign Minister Penny Wong here?

PATERSON: I think it's very important that Australia don't claim a victory here, that we're not presumptuous or arrogant in saying that this decision has been made at our behest or because of our intervention. That would be disrespectful towards the Pacific Island nations who have made this decision in their own national interest. Certainly, it was welcome that Penny Wong as Foreign Minister, visited the Pacific as quickly as she did and advocated it the way she did. But it's not appropriate for us to be engaging in any sort of victory lap here because that would be disrespectful.

STEFANOVIC: There are some people who have said that Penny Wong has already achieved more in a week than Marise Payne had achieved in three years. Are you buying into that?

STEFANOVIC: The Foreign Minister of China had said on Monday that China is willing to enhance communication with all countries that care about the Pacific, especially Australia and New Zealand. Is that a crack in the wall forming there?

PATERSON: It's really hard to tell. I would bevery sceptical until we see concrete actions from the Chinese government to,for example, lift the unjustified trade sanctions against a whole range of Australian industries, to release the Australians detained without good evidence of any wrongdoing, to cease their record levels of foreign interference and espionage against Australia. I mean, they're the kind of concrete steps that will be necessary for us to demonstrate any kind of thaw in relationship from the Chinese government side. We haven't seen any of those yet. Rhetorical flourishes like that, while they might make people feel nice and they might be, seem encouraging, really are not tangible steps towards repairing the relationship which all have to come from the Chinese government side.

STEFANOVIC: Okay. We heard from Richard Marles, the new Defence Minister, on the program about half an hour or so ago now. He said,similar to you, that China will still maintain an interest in the Pacific despite walking back these security deals. He called China our biggest anxiety,not our biggest security threat, our biggest anxiety. What are your thoughts on his comments this morning and also his promotion to the portfolio of Defence taking over from Peter Dutton?

PATERSON: Well, that is a step forward from Richard Marles because previously he welcomed China's involvement in the Pacific and said Australia shouldn't be engaged in any efforts to block or reduce their influence in the Pacific. So, I'm pleased that his views appear to have evolved there. I hope they continue to evolve in that direction. I mean, I guess it is true to say that it is Australia's greatest anxiety, but I think we should also be honest and speak plainly and say they are our greatest security threat as well. I mean, we are not investing $270 billion over the next decade in acquiring new defence capability just for the fun of it. We're acquiring it because we believe it is necessary to deter potential aggressors, including China, in our region, from engaging in unilateral action, which would change the status quo. We don't want that to happen, and we are investing in our own capability to make sure that along with our allies, including the United States, Japan and others, that we can credibly discourage and deter China from engaging in that action.

STEFANOVIC: Okay. We're just seeing, James, a couple of live pictures coming to us from Canberra at the moment. The new ministers will be sworn in this morning at Government House. Here they are here. Just a couple of observations to finish up here. What are your thoughts on Labor's line up, the portfolios that were handed out last night?

PATERSON: Look, I congratulate the new ministers on being sworn in today. It is a very great honour to be minister of the Crown and I wish them all the very best in implementing their policies successfully. They made some very, very big commitments at this election to tackle the cost of living, to increase wages, to grow the economy. And I think they'll find that task more difficult than they thought it was from Opposition. But I really hope they're successful because it's certainly in Australia's national interest that our country succeeds at these times. We are facing the most uncertain strategic environment since the 1930s, so I don't want this government to fail, but it will be our job as the Opposition to hold them to account for the promises they made and to scrutinise their performance very closely. And we will do that.

STEFANOVIC: Just looking across the aisle. Tanya Plibersek, there's been a lot made of her this morning and her appointment or her shift from Education to Environment and Water. Is that a demotion, in your view?

PATERSON: I imagine that would have been a disappointing outcome for Tanya Plibersek. She's very clearly passionate about education and did a lot of work to develop Labor's education policies in the election. I know that she did appear to be sidelined as a spokesperson for the Labor Party during the election and has appeared to be demoted in the Cabinet today. That would be a personal disappointment to her, no doubt, and perhaps reflects some insecurity on Anthony Albanese's part, given that they have in the past been leadership rivals.

STEFANOVIC: And just a final one here for you,Senator, have you got your hand up and in which portfolio in particular for the new Liberal leader Peter Dutton?

PATERSON: I want to make Peter Dutton's leadership a success. I think he's an outstanding Liberal and exactly the right person we need at this time. And I will be very grateful to serve in any opportunity he asks me to serve in. Obviously, I have a strong interest in national security having Chaired the intelligence and security committee and been vocal on these issues for a number of years. But wherever there are opportunities to serve, I look forward to taking those up.

STEFANOVIC: Good one. Senator James Paterson, good to have you with us. Thanks for your time.