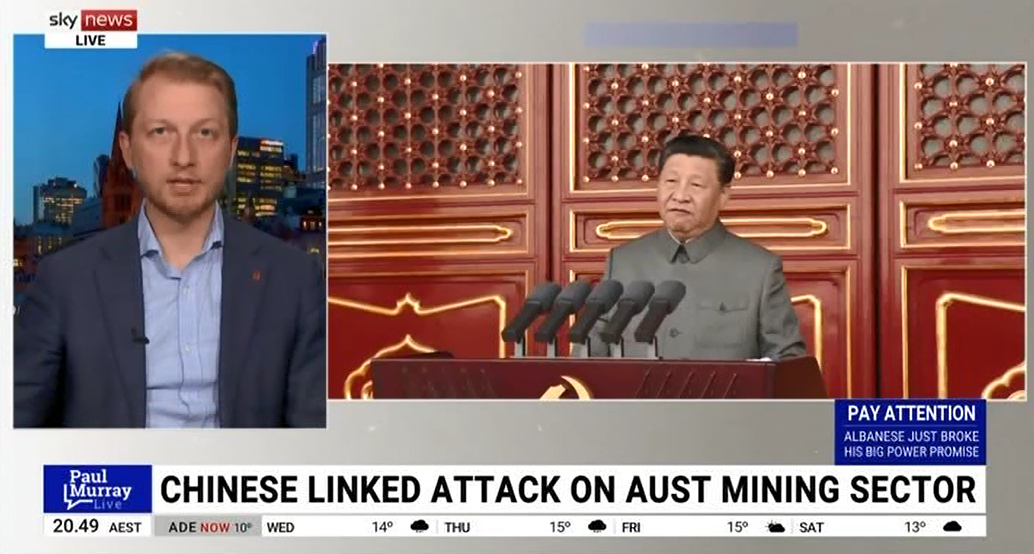 PAUL MURRAY: The man who is the eye in the sky when it comes to China – was so in government, will be even more so in opposition – our mate, James Paterson, who joins us now, of course, from Melbourne. Great man. Nice to see you again.

Now, today we learn about how cyber-attacks, this is often the way that people affiliated with countries like China, like Iran, like Russia, but mostly for our country, China, can go after instrumentalities. They've tried to have a crack in Australian mining. Explain to people the importance and what a cyber-attack looks like on an Australian instrumentality.

JAMES PATERSON: Yeah, this is a really interesting case study, Paul, for two reasons. One is most Australians will be familiar with the sort of cyber-attacks they've read about like ransomware where a criminal gang tries to steal money from you, or industrial espionage where someone tries to steal a commercially valuable secret, or even sabotage where they go after a critical infrastructure asset. But in this instance, it looks like the Chinese government is backing an effort to engage in public disinformation about an Australian company in the critical minerals industry to try and generate opposition, local environmental opposition to this company's mines and its factories, and to try and cause effectively problems for that company operating and to slow them down. Now, this is, that's one reason that's interesting.

The second reason it's interesting is that critical minerals have become a really hot area of contest in the last decade. China identified quite wisely that in the manufacturing of phones and planes and cars and televisions and everything else electronic in the modern era, you need these critical minerals to make them. And they effectively cornered the market by expanding around the globe, identifying the mines, buying them up and effectively had a monopoly. And we've responded in kind with agreements through the US and Australian government to back alternative suppliers to that, because we didn't want to be at a technological disadvantage. But China wasn't just content in trying to maintain that effective monopoly over supply. They've actually gone ahead and tried to effectively sabotage their rivals, their competitors in the commercial marketplace, again, to have a stranglehold and a control over this really important input into modern manufacturing. It just shows how strategic the Chinese government is, the Chinese Communist Party is. How far sighted they can be and how determined they are to effectively weaken all of the rest of the world, the free world and the West in particular, and to advance their own interests against ours.

MURRAY: Now also we see today that Penny Wong says that Australians are right to understand that China is a problem. I thought when you guys said that a couple of months ago, that was fear mongering?

PATERSON: That's right, and megaphone diplomacy. Paul, I hope it is the case that Penny Wong and Labor ministers have been receiving their intelligence and security briefings, as we did in government, and have been, had a real reality check from that process. They have had a sobering experience understanding the nature and the extent of the Chinese government threat to our sovereignty and our freedom and our democracy. And they've woken up to that and they're now going to be a responsible, mature government in the way in which they were not often in opposition, where they opportunistically attacked us and criticised us for the China relationship and the state of the China relationship.

My fear is though, that this is not a sincere conversion, if it is a conversion, and their heart is not really in it, and we can't rely on them to continue to be sensible on these issues and we can't always rely on them to listen to the people that give that good advice. I hope I'm wrong. I hope they do maintain a steady course. I hope that Anthony Albanese continues to send strong signals to China as he has this week in relation to Ukraine and Russia. That's positive. I want to see more of that, and I hope Penny Wong recognises those public opinion polls which show that Australians have woken up well and truly, they started to more than five years ago, and it's about time the Labor Party did too.

MURRAY: Agree completely. Thank you so much, Senator. Let's keep talking into the future because this matters more than so many other things that people gab on about all day, every day. Thank you, mate.

PATERSON: Good to see you.

MURRAY: Good on you, James.