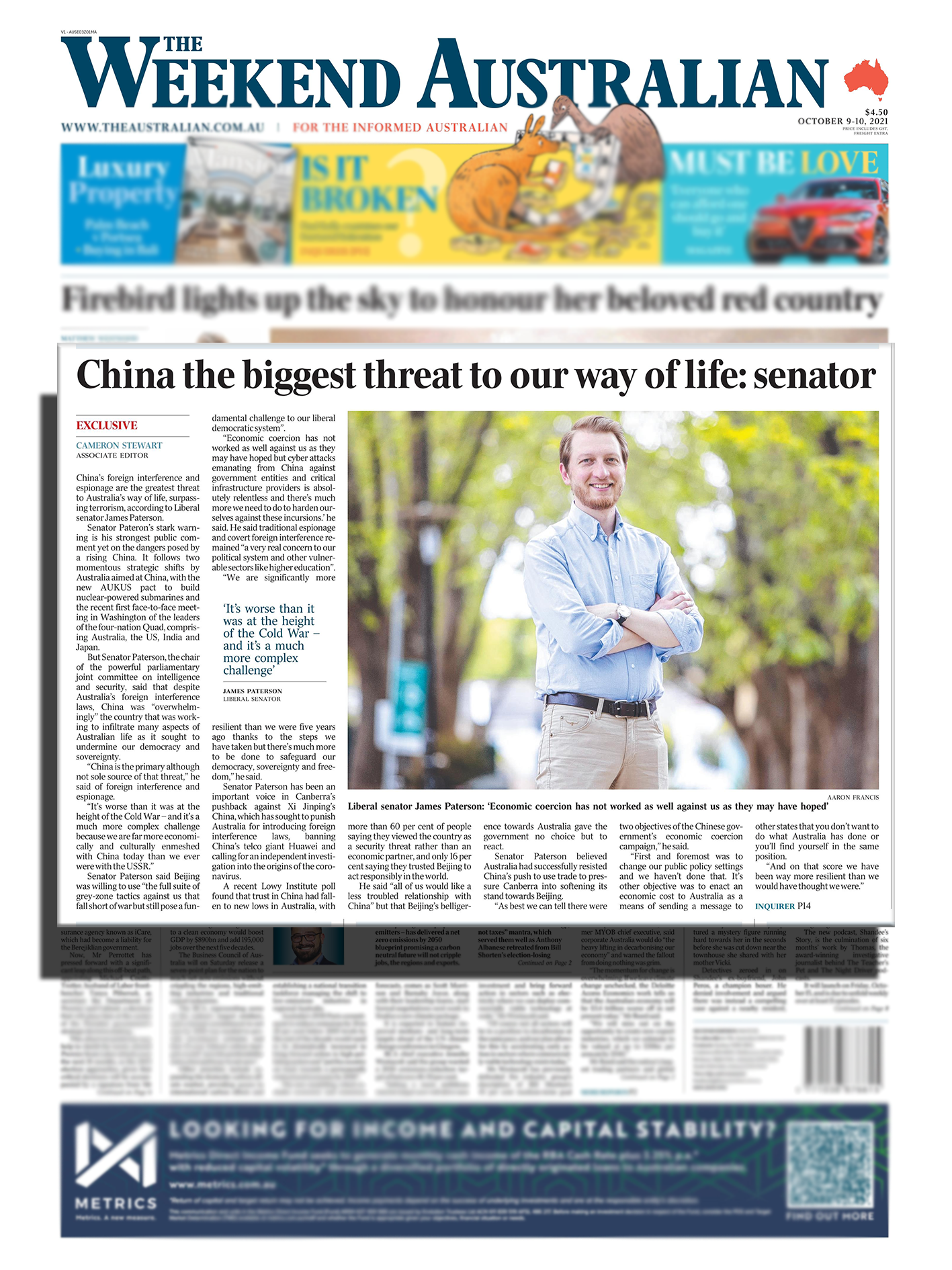 China’s foreign interference and espionage are the greatest threat to Australia’s way of life, surpassing terrorism, according to Liberal senator James Paterson.

Senator Pateron’s stark warning is his strongest public comment yet on the dangers posed by a rising China. It follows two ­momentous strategic shifts by Australia aimed at China, with the new AUKUS pact to build ­nuclear-powered submarines and the recent first face-to-face meeting in Washington of the leaders of the four-nation Quad, comprising Australia, the US, India and Japan.

But Senator Paterson, the chair of the powerful parliamentary joint committee on intelligence and security, said that despite Australia’s foreign interference laws, China was “overwhelmingly” the country that was working to infiltrate many aspects of Australian life as it sought to undermine our democracy and sovereignty. “China is the primary although not sole source of that threat,” he said of foreign interference and espionage.

“It’s worse than it was at the height of the Cold War – and it’s a much more complex challenge ­because we are far more economically and culturally enmeshed with China today than we ever were with the USSR.”

Senator Paterson said Beijing was willing to use “the full suite of grey-zone tactics against us that fall short of war but still pose a fundamental challenge to our liberal democratic system”.

“Economic coercion has not worked as well against us as they may have hoped but cyber attacks emanating from China against government entities and critical infrastructure providers is absolutely relentless and there’s much more we need to do to harden ourselves against these incursions.’ he said.

He said traditional espionage and covert foreign interference remained “a very real concern to our political system and other vulnerable sectors like higher education”.

“We are significantly more ­resilient than we were five years ago thanks to the steps we have taken but there’s much more to be done to safeguard our democracy, sovereignty and freedom,” he said.

Senator Paterson has been an important voice in Canberra’s pushback against Xi Jinping’s China, which has sought to punish Australia for introducing foreign interference laws, banning China’s telco giant Huawei and calling for an independent investigation into the origins of the coronavirus.

A recent Lowy Institute poll found that trust in China had fallen to new lows in Australia, with more than 60 per cent of people saying they viewed the country as a security threat rather than an economic partner, and only 16 per cent saying they trusted Beijing to act responsibly in the world.

He said “all of us would like a less troubled relationship with China” but that Beijing’s belligerence towards Australia gave the government no choice but to react.

Senator Paterson believed Australia had successfully resisted China’s push to use trade to pressure Canberra into softening its stand towards Beijing.

“As best we can tell there were two objectives of the Chinese government’s economic coercion campaign,” he said.

“First and foremost was to change our public policy settings and we haven’t done that. It’s other objective was to enact an economic cost to Australia as a means of sending a message to other states that you don’t want to do what Australia has done or you’ll find yourself in the same position. And on that score we have been way more resilient than we would have thought we were.”