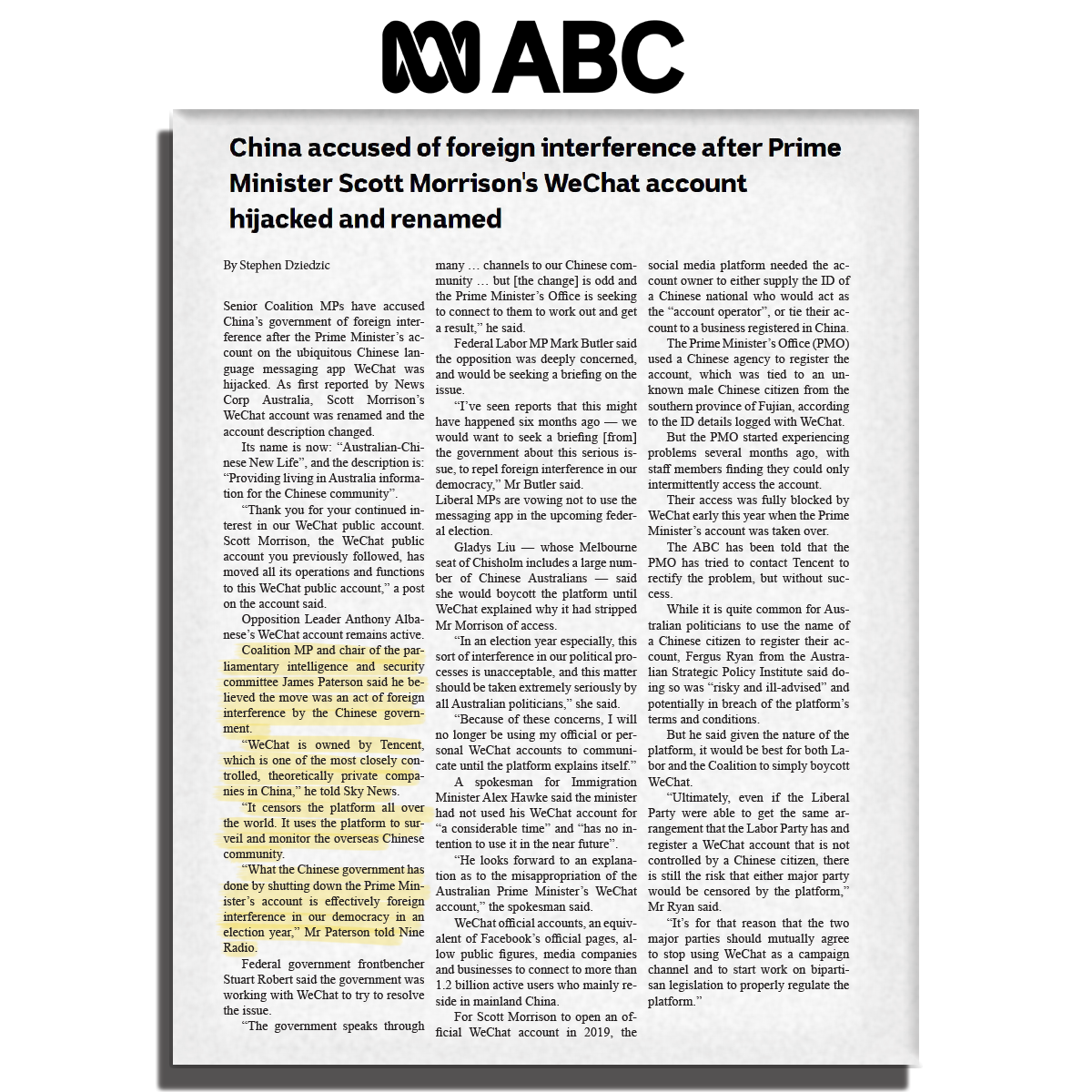 Its name is now: "Australian-Chinese New Life", and the description is: "Providing living in Australia information for the Chinese community".

Coalition MP and chair of the parliamentary intelligence and security committee James Paterson said he believed the move was an act of foreign interference by the Chinese government.

"WeChat is owned by Tencent, which is one of the most closely controlled, theoretically private companies in China," he told Sky News

"What the Chinese government has done by shutting down the Prime Minister's account is effectively foreign interference in our democracy in an election year," Mr Paterson told Nine Radio.

Federal government frontbencher Stuart Robert said the government was working with WeChat to try to resolve the issue.

"The government speaks through many … channels to our Chinese community … but [the change] is odd and the Prime Minister's Office is seeking to connect to them to work out and get a result," he said.

Federal Labor MP Mark Butler said the opposition was deeply concerned, and would be seeking a briefing on the issue.

"I've seen reports that this might have happened six months ago — we would want to seek a briefing [from] the government about this serious issue, to repel foreign interference in our democracy," Mr Butler said.

Liberal MPs are vowing not to use the messaging app in the upcoming federal election.

Gladys Liu — whose Melbourne seat of Chisholm includes a large number of Chinese Australians — said she would boycott the platform until WeChat explained why it had stripped Mr Morrison of access.

"In an election year especially, this sort of interference in our political processes is unacceptable, and this matter should be taken extremely seriously by all Australian politicians," she said.

"Because of these concerns, I will no longer be using my official or personal WeChat accounts to communicate until the platform explains itself."

A spokesman for Immigration Minister Alex Hawke said the minister had not used his WeChat account for "a considerable time" and "has no intention to use it in the near future".

"He looks forward to an explanation as to the misappropriation of the Australian Prime Minister's WeChat account," the spokesman said.

For Scott Morrison to open an official WeChat account in 2019, the social media platform needed the account owner to either supply the ID of a Chinese national who would act as the "account operator", or tie their account to a business registered in China.

The Prime Minister's Office (PMO) used a Chinese agency to register the account, which was tied to an unknown male Chinese citizen from the southern province of Fujian, according to the ID details logged with WeChat.

But the PMO started experiencing problems several months ago, with staff members finding they could only intermittently access the account.

Their access was fully blocked by WeChat early this year when the Prime Minister's account was taken over.

The ABC has been told that the PMO has tried to contact Tencent to rectify the problem, but without success.

While it is quite common for Australian politicians to use the name of a Chinese citizen to register their account, Fergus Ryan from the Australian Strategic Policy Institute said doing so was "risky and ill-advised" and potentially in breach of the platform's terms and conditions.

But he said given the nature of the platform, it would be best for both Labor and the Coalition to simply boycott WeChat.

"Ultimately, even if the Liberal Party were able to get the same arrangement that the Labor Party has and register a WeChat account that is not controlled by a Chinese citizen, there is still the risk that either major party would be censored by the platform," Mr Ryan said.

"It's for that reason that the two major parties should mutually agree to stop using WeChat as a campaign channel and to start work on bipartisan legislation to properly regulate the platform."