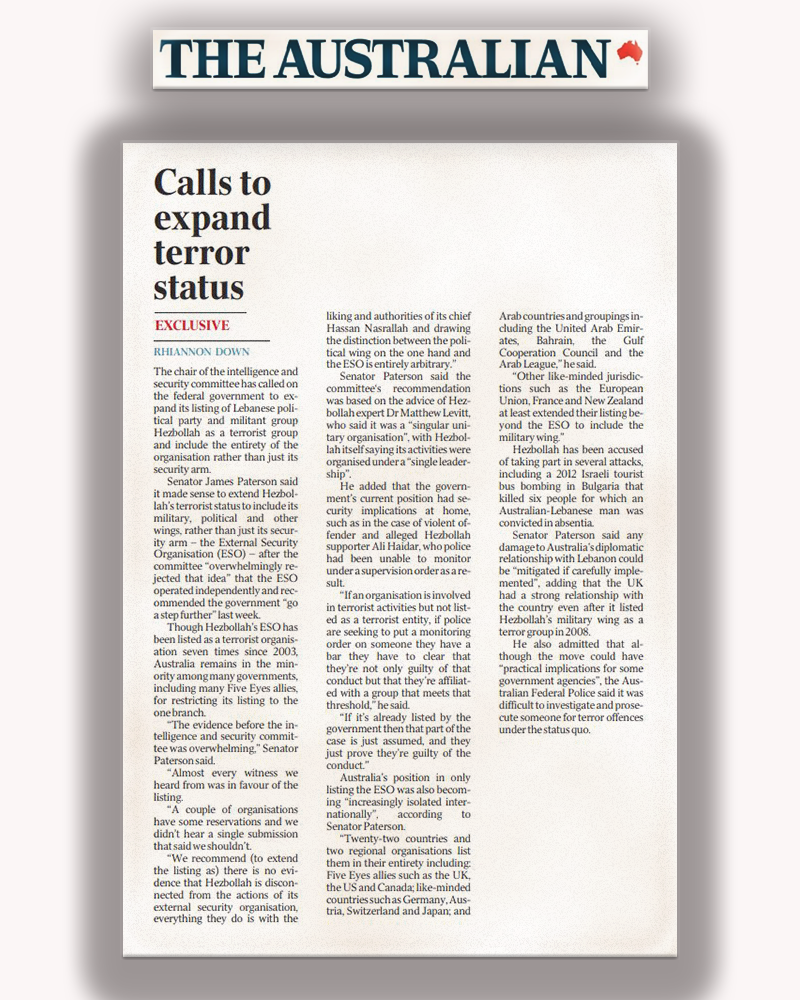 The chair of the intelligence and security committee has called on the federal government to expand its listing of Lebanese political party and militant group Hezbollah as a terrorist group and include the entirety of the organisation rather than just its security arm.

Senator James Paterson said it made sense to extend Hezbollah’s terrorist status to include its military, political and other wings, rather than just its security arm – the External Security Organisation (ESO) – after the committee “overwhelmingly rejected that idea” that the ESO operated independently and recommended the government “go a step further” last week.

Though Hezbollah’s ESO has been listed as a terrorist organisation seven times since 2003, Australia remains in the minority among many governments, including many Five Eyes allies, for restricting its listing to the one branch.

“The evidence before the intelligence and security committee was overwhelming,” Senator Paterson said.

“Almost every witness we heard from was in favour of the listing.

“A couple of agencies had some reservations but we didn’t receive a single submission that said we shouldn’t.

“We recommend (to extend the listing as) there is no evidence that Hezbollah is disconnected from the actions of its external security organisation, everything they do is with the liking and authorities of its chief Hassan Nasrallah and drawing the distinction between the political wing on the one hand and the ESO is entirely arbitrary.”

Senator Paterson said the committee‘s recommendation was based on the advice of Hezbollah expert Dr Matthew Levitt, who said it was a “singular unitary organisation”, with Hezbollah itself saying its activities were organised under a “single leadership”.

He added that the government’s current position had security implications at home, such as in the case of violent offender and alleged Hezbollah supporter Ali Haidar, who police had been unable to monitor under a supervision order as a result.

“If an organisation is involved in terrorist activities but not listed as a terrorist entity, if police are seeking to put a monitoring order on someone they have a bar they have to clear that they’re not only guilty of that conduct but that they’re affiliated with a group that meets that threshold,” he said.

“If it’s already listed by the government then that part of the case is just assumed, and they just prove they’re guilty of the conduct.”

Australia’s position in only listing the ESO was also becoming “increasingly isolated internationally”, according to Senator Paterson.

“Twenty-two countries and two regional organisations list them in their entirety including: Five Eyes allies such as the UK, the US and Canada; like-minded countries such as Germany, Austria, Switzerland and Japan; and Arab countries and groupings including the United Arab Emirates, Bahrain, the Gulf Cooperation Council and the Arab League,” he said.

“Other like-minded jurisdictions such as the European Union, France and New Zealand at least extended their listing beyond the ESO to include the military wing.”

Hezbollah has been accused of taking part in several attacks, including a 2012 Israeli tourist bus bombing in Bulgaria that killed six people for which an Australian-Lebanese man was convicted in absentia.

Senator Paterson said any damage to Australia’s diplomatic relationship with Lebanon could be “mitigated if carefully implemented”, adding that the UK had a strong relationship with the country even after it listed Hezbollah’s military wing as a terror group in 2008.

He also admitted that although the move could have “practical implications for some government agencies”, the Australian Federal Police said it was difficult to investigate and prosecute someone for terror offences under the status quo.