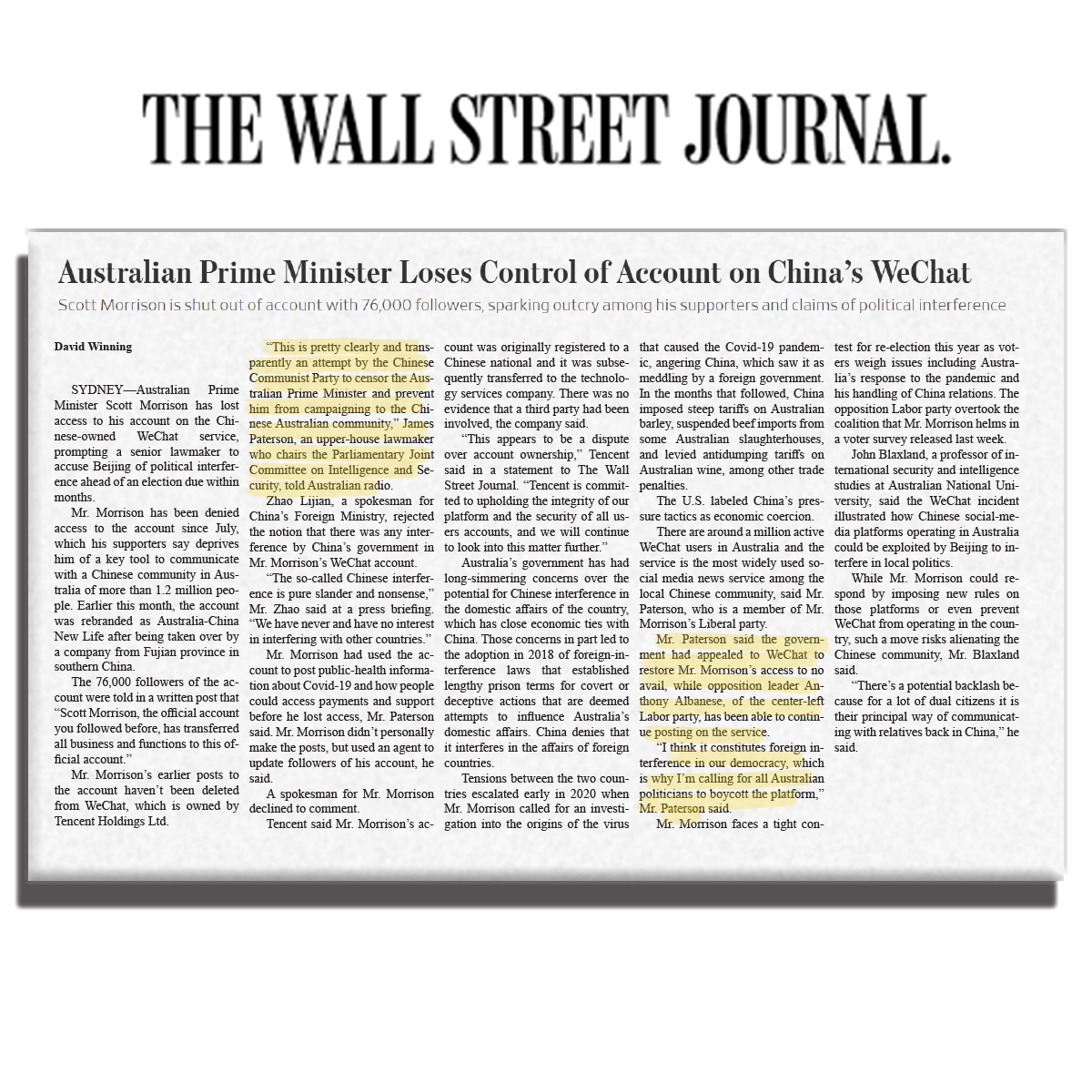 SYDNEY—Australian Prime Minister Scott Morrison has lost access to his account on the Chinese-owned WeChat service, prompting a senior lawmaker to accuse Beijing of political interference ahead of an election due within months.

Mr. Morrison has been denied access to the account since July, which his supporters say deprives him of a key tool to communicate with a Chinese community in Australia of more than 1.2 million people. Earlier this month, the account was rebranded as Australia-China New Life after being taken over by a company from Fujian province in southern China.

Mr. Morrison’s earlier posts to the account haven’t been deleted from WeChat, which is owned by Tencent Holdings Ltd.

“This is pretty clearly and transparently an attempt by the Chinese Communist Party to censor the Australian Prime Minister and prevent him from campaigning to the Chinese Australian community,” James Paterson, an upper-house lawmaker who chairs the Parliamentary Joint Committee on Intelligence and Security, told Australian radio.

Zhao Lijian, a spokesman for China’s Foreign Ministry, rejected the notion that there was any interference by China’s government in Mr. Morrison’s WeChat account.

“The so-called Chinese interference is pure slander and nonsense,” Mr. Zhao said at a press briefing. “We have never and have no interest in interfering with other countries.”

Mr. Morrison had used the account to post public-health information about Covid-19 and how people could access payments and support before he lost access, Mr. Paterson said. Mr. Morrison didn’t personally make the posts, but used an agent to update followers of his account, he said.

Tencent said Mr. Morrison’s account was originally registered to a Chinese national and it was subsequently transferred to the technology services company. There was no evidence that a third party had been involved, the company said.

“This appears to be a dispute over account ownership,” Tencent said in a statement to The Wall Street Journal. “Tencent is committed to upholding the integrity of our platform and the security of all users accounts, and we will continue to look into this matter further.”

Australia’s government has had long-simmering concerns over the potential for Chinese interference in the domestic affairs of the country, which has close economic ties with China. Those concerns in part led to the adoption in 2018 of foreign-interference laws that established lengthy prison terms for covert or deceptive actions that are deemed attempts to influence Australia’s domestic affairs. China denies that it interferes in the affairs of foreign countries.

Tensions between the two countries escalated early in 2020 when Mr. Morrison called for an investigation into the origins of the virus that caused the Covid-19 pandemic, angering China, which saw it as meddling by a foreign government. In the months that followed, China imposed steep tariffs on Australian barley, suspended beef imports from some Australian slaughterhouses, and levied antidumping tariffs on Australian wine, among other trade penalties. The U.S. labeled China’s pressure tactics as economic coercion.

There are around a million active WeChat users in Australia and the service is the most widely used social media news service among the local Chinese community, said Mr. Paterson, who is a member of Mr. Morrison’s Liberal party.

Mr. Paterson said the government had appealed to WeChat to restore Mr. Morrison’s access to no avail, while opposition leader Anthony Albanese, of the center-left Labor party, has been able to continue posting on the service.

“I think it constitutes foreign interference in our democracy, which is why I’m calling for all Australian politicians to boycott the platform,” Mr. Paterson said.

Mr. Morrison faces a tight contest for re-election this year as voters weigh issues including Australia’s response to the pandemic and his handling of China relations. The opposition Labor party overtook the coalition that Mr. Morrison helms in a voter survey released last week.

John Blaxland, a professor of international security and intelligence studies at Australian National University, said the WeChat incident illustrated how Chinese social-media platforms operating in Australia could be exploited by Beijing to interfere in local politics.

While Mr. Morrison could respond by imposing new rules on those platforms or even prevent WeChat from operating in the country, such a move risks alienating the Chinese community, Mr. Blaxland said.

“There’s a potential backlash because for a lot of dual citizens it is their principal way of communicating with relatives back in China,” he said.