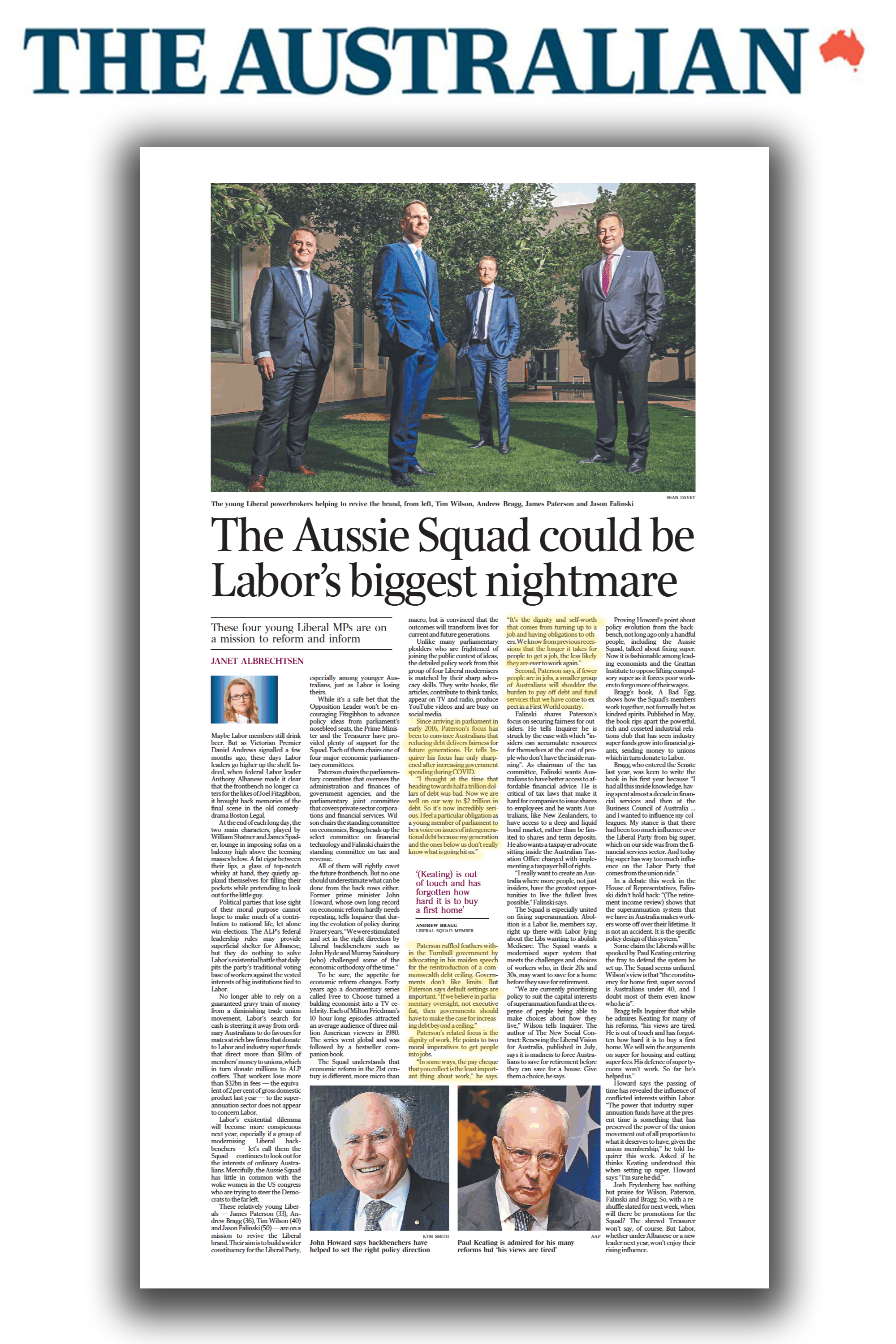 Maybe Labor members still drink beer. But as Victorian Premier Daniel Andrews signalled a few months ago, these days Labor leaders go higher up the shelf. Indeed, when federal Labor leader Anthony Albanese made it clear that the frontbench no longer caters for the likes of Joel Fitzgibbon, it brought back memories of the final scene in the old comedy-drama Boston Legal.

At the end of each long day, the two main characters, played by William Shatner and James Spader, lounge in imposing sofas on a balcony high above the teeming masses below. A fat cigar between their lips, a glass of top-notch whisky at hand, they quietly applaud themselves for filling their pockets while pretending to look out for the little guy.

Political parties that lose sight of their moral purpose cannot hope to make much of a contribution to national life, let alone win elections. The ALP’s federal leadership rules may provide superficial shelter for Albanese, but they do nothing to solve Labor’s existential battle that daily pits the party’s traditional voting base of workers against the vested interests of big institutions tied to Labor.

No longer able to rely on a guaranteed gravy train of money from a diminishing trade union movement, Labor’s search for cash is steering it away from ordinary Australians to do favours for mates at rich law firms that donate to Labor and industry super funds that direct more than $10m of members’ money to unions, which in turn donate millions to ALP coffers. That workers lose more than $32bn in fees — the equivalent of 2 per cent of gross domestic product last year — to the superannuation sector does not appear to concern Labor.

Labor’s existential dilemma will become more conspicuous next year, especially if a group of modernising Liberal backbenchers — let’s call them the Squad — continues to look out for the interests of ordinary Australians. Mercifully, the Aussie Squad has little in common with the woke women in the US congress who are trying to steer the Democrats to the far left.

These relatively young Liberals — James Paterson (33), Andrew Bragg (36), Tim Wilson (40) and Jason Falinski (50) — are on a mission to revive the Liberal brand. Their aim is to build a wider constituency for the Liberal Party, especially among younger Aus­tralians, just as Labor is losing theirs.

While it’s a safe bet that the Opposition Leader won’t be encouraging Fitzgibbon to advance policy ideas from parliament’s nosebleed seats, the Prime Minister and the Treasurer have provided plenty of support for the Squad. Each of them chairs one of four major economic parliamentary committees.

All of them will rightly covet the future frontbench. But no one should underestimate what can be done from the back rows either. Former prime minister John Howard, whose own long record on economic reform hardly needs repeating, tells Inquirer that during the evolution of policy during Fraser years, “We were stimulated and set in the right direction by Liberal backbenchers such as John Hyde and Murray Sainsbury (who) challenged some of the economic orthodoxy of the time.”

To be sure, the appetite for economic reform changes. Forty years ago a documentary series called Free to Choose turned a balding economist into a TV celebrity. Each of Milton Friedman’s 10 hour-long episodes attracted an average audience of three million American viewers in 1980. The series went global and was followed by a bestseller companion book.

The Squad understands that economic reform in the 21st century is different, more micro than macro, but is convinced that the outcomes will transform lives for current and future generations.

Unlike many parliamentary plodders who are frightened of joining the public contest of ideas, the detailed policy work from this group of four Liberal modernisers is matched by their sharp advocacy skills. They write books, file articles, contribute to think tanks, appear on TV and radio, produce YouTube videos and are busy on social media.

Since arriving in parliament in early 2016, Paterson’s focus has been to convince Australians that reducing debt delivers fairness for future generations. He tells Inquirer his focus has only sharpened after increasing government spending during COVID.

“I thought at the time that heading towards half a trillion dollars of debt was bad. Now we are well on our way to $2 trillion in debt. So it’s now incredibly serious. I feel a particular obligation as a young member of parliament to be a voice on issues of intergenerational debt because my generation and the ones below us don’t really know what is going hit us.”

Paterson ruffled feathers within the Turnbull government by advocating in his maiden speech for the reintroduction of a commonwealth debt ceiling. Governments don’t like limits. But Paterson says default settings are important. “If we believe in parliamentary oversight, not executive fiat, then governments should have to make the case for increasing debt beyond a ceiling.”

Paterson’s related focus is the dignity of work. He points to two moral imperatives to get people into jobs.

“In some ways, the pay cheque that you collect is the least important thing about work,” he says. “It’s the dignity and self-worth that comes from turning up to a job and having obligations to others. We know from previous recessions that the longer it takes for people to get a job, the less likely they are ever to work again.”

Second, Paterson says, if fewer people are in jobs, a smaller group of Australians will shoulder the burden to pay off debt and fund services that we have come to expect in a First World country.

Falinski shares Paterson’s focus on securing fairness for outsiders. He tells Inquirer he is struck by the ease with which “insiders can accumulate resources for themselves at the cost of people who don’t have the inside running”. As chairman of the tax committee, Falinski wants Australians to have better access to affordable financial advice.

He is critical of tax laws that make it hard for companies to issue shares to employees and he wants Australians, like New Zealanders, to have access a deep and liquid bond market, rather than be limited to shares and term deposits. He also wants a taxpayer advocate sitting inside the Australian Taxation Office charged with implementing a taxpayer bill of rights.

“I really want to create an Australia where more people, not just insiders, have the greatest opportunities to live the fullest lives possible,” Falinski says.

The Squad is especially united on fixing superannuation. Abolition is a Labor lie, members say, right up there with Labor lying about the Libs wanting to abolish Medicare. The Squad wants a modernised super system that meets the challenges and choices of workers who, in their 20s and 30s, may want to save for a home before they save for retirement.

“We are currently prioritising policy to suit the capital interests of superannuation funds at the expense of people being able to make choices about how they live,” Wilson tells Inquirer. The author of The New Social Contract: Renewing the Liberal Vision for Australia, published in July, says it is madness to force Australians to save for retirement before they can save for a house. Give them a choice, he says.

Proving Howard’s point about policy evolution from the backbench, not long ago only a handful people, including the Aussie Squad, talked about fixing super. Now it is fashionable among leading economists and the Grattan Institute to oppose lifting compulsory super because it forces poor workers to forgo more of their wages.

Bragg’s book, A Bad Egg, shows how the Squad’s members work together, not formally but as kindred spirits. Published in May, the book rips apart the powerful, rich and cosseted industrial relations club that has seen industry super funds grow into financial giants, sending money to unions which in turn donate to Labor.

Bragg, who entered the Senate last year, was keen to write the book in his first year because “I had all this inside knowledge, having spent almost a decade in financial services and then at the Business Council of Australia … and I wanted to influence my colleagues. My stance is that there had been too much influence over the Liberal Party from big super, which on our side was from the financial services sector. And today big super has way too much influence on the Labor Party that comes from the union side.”

In a debate this week in the House of Representatives, Falinski didn’t hold back: “(The retirement income review) shows that the superannuation system that we have in Australia makes workers worse off over their lifetime. It is not an accident. It is the specific policy design of this system.”

Some claim the Liberals will be spooked by Paul Keating entering the fray to defend the system he set up. The Squad seems unfazed. Wilson’s view is that “the constituency for home first, super second is Australians under 40, and I doubt most of them even know who he is”.

Bragg tells Inquirer that while he admires Keating for many of his reforms, “his views are tired. He is out of touch and has forgotten how hard it is to buy a first home. We will win the arguments on super for housing and cutting super fees. His defence of super tycoons won’t work. So far he’s helped us.”

Howard says the passing of time has revealed the influence of conflicted interests within Labor. “The power that industry superannuation funds have at the present time is something that has preserved the power of the union movement out of all proportion to what it deserves to have, given the union membership,” he told Inquirer this week. Asked if he thinks Keating understood this when setting up super, Howard says: “I’m sure he did.”

Josh Frydenberg has nothing but praise for Wilson, Paterson, Falinski and Bragg. So, with a reshuffle slated for next week, when will there be promotions for the Squad? The shrewd Treasurer won’t say, of course. But Labor, whether under Albanese or a new leader next year, won’t enjoy their rising influence.