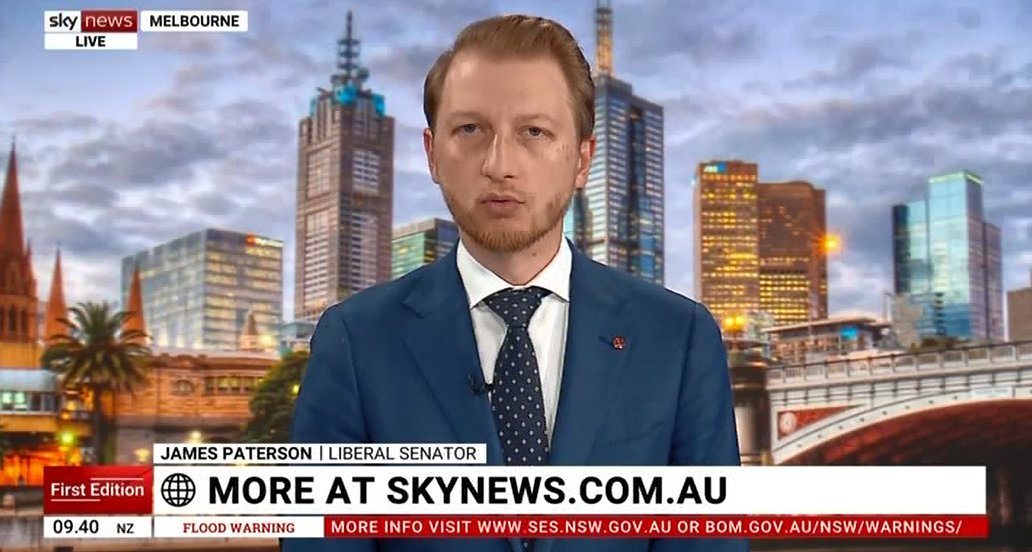 PETER STEFANOVIC: High-level negotiations are reportedly underway between Beijing and Canberra that could lead to a meeting involving their respective Foreign Ministers in Bali this week. Joining us live is our panel this morning, Liberal Senator James Paterson and the Labor MP Peter Khalil. Peter, I'll start with you on that one first. Is the ice melting?

PETER KHALIL: Good morning, Peter. Look, it's a promising development. It would be the first meeting between, ministerial level meeting, since I think Minister Payne met with Minister Wang back in 2019. And I think if it does, go ahead, it's not just to Australia's benefit, that kind of discussion, but I think also to China's and if they are willing to end the economic coercion and the arbitrary detention of Australians, that will go a long way in us re-establishing some normalcy around our economic relationship, which is important for Australia's economy and for Australian prosperity. And it's an opportunity for a frank and full exchange and I hope that it does go ahead.

STEFANOVIC: Is that a guarantee, James, that those points that Peter just made there, is there any kind of guarantee that we can get those?

JAMES PATERSON: Look, the opposition would certainly welcome it [coughs]. Excuse me. The opposition would certainly welcome it if there was a ministerial meeting again between the Foreign Ministers. It has been totally unproductive that the Chinese government has placed a ban on all ministerial meeting until now and it would be good progress. We'd like to see restoration of normal communications between our levels of government. But those meetings are not an end in themselves. They are just a means to an end. And as Peter rightly said, that end goal, which we should all aim for, is the end of all measures of economic coercion, the releasing of all Australians who are arbitrarily detained and ceasing of the extraordinary levels of foreign interference and espionage in our democracy, which has been perpetrated primarily by the Chinese Communist Party. That's the end state which we should all be aiming for. And I think that is far from certain, unfortunately, because it is reflective of the posture that the Chinese Communist Party has adopted to the entire world, not just to Australia, and to our entire region. And it would require a very significant change of heart in Beijing, and unfortunately, I don't see much evidence of that.

STEFANOVIC: James, Penny Wong and Richard Marles seem to be making more progress than your government did. Why do you think that is?

PATERSON: Well, it's very clear that the Chinese Communist Party had a very strong dislike for the Morrison government because of the way in which it stood up to Beijing, because of the way in which it called it out for its excesses, for its human rights abuses, for its interference in Australian democracy, particularly for the AUKUS pact. I mean, we saw in The China Daily editorial last week that attacked Prime Minister Albanese that this remains a very sore point for the Chinese government, that our continued pursuit of the means with which to defend ourselves confidently in the 21st century, namely nuclear-powered submarines and all the other benefits that will flow from AUKUS, remains a very sore point for the Chinese government. And that is a point of pride, frankly, for the former government and all of us who contributed to that, because, as this government has said and promises to continue - and we will watch that closely and we hope they do - it is essential to making sure we can navigate the next very difficult decade.

STEFANOVIC: Yeah, on that point, Peter, China said just last week through its mouth mouthpiece that Anthony Albanese was ill-informed and had a poor grasp of political realities after the Prime Minister drew those parallels between China and Russia. So, can Xi be trusted if there is any talk whatsoever of softening language around our relationship?

KHALIL: Well, look, I think the Prime Minister's statements around the strategic convergence between Beijing and Moscow, which have been underpinned, frankly, by that, that no, so-called no limits pact that was signed between Russia and China before the invasion of Ukraine is very, very clear. It's factual. And the Prime Minister has been very strong with respect to the relationship with China. He said clearly, you know, we're happy to talk and we are happy to talk as a government. But China has to end the economic coercion,

release or end the arbitrary detention of Australians held in China. And as James said as well, see some of the, all of the interference that we're seeing, cyber and otherwise in our political system. And frankly, democracies around the world are under siege. They're being attacked externally, obviously, with the invasion of Ukraine, but also internally, as James has rightly pointed out, and this is something that we have to stand firm against. This goes beyond politics and the Albanese government has been very, very strong from the very beginning, the first day, around the importance of standing firm on human rights and our values and our sovereignty with respect to all those issues.

STEFANOVIC: Yeah, and James, you mentioned there that China was particularly tough on Australia because of Scott Morrison's government's stance on China. But that hasn't really changed, has it, under Anthony Albanese? There's no point anywhere where he's stepped back.

PATERSON: You're right, Peter. I welcome the strong statements made by the Albanese government and the key ministers since they were elected and the continuation of the policies which we put in place when we were in government. I hope that continues. I can guarantee the opposition will provide very strong bipartisan support for those policies if they continue under this government. That's what we all hope to see because that's what we need in the very difficult climate we are now navigating and in the national interest, we will support the government if it ever has to make tough decisions like we had to make with AUKUS to end the French submarine contract so that we could acquire nuclear propelled submarines. We won't, as the opposition sometimes did when they were in opposition, when the Labor Party was in opposition, seek to undermine that by seeking to gain political advantage and criticising the government if there were any difficulties in the relationship with China.

KHALIL: I was just going to say, I think, look, the national interest issues, I think there is a degree of bipartisanship on those very important principles that we've been discussing this morning. If there's any difference there's a difference in technique, if you like, or style. I mean, Labor has been very clear about doing foreign diplomacy differently than the previous government, than the Morrison government. We were critical in opposition about the way they went about it. We are now implementing the way that we go about it, and Prime Minister Albanese has been very clear about quiet diplomacy and diplomacy being more nuanced to get results. But the fundamental principles are the same and that is really the important thing because they go to the national interest for Australia.

STEFANOVIC: Okay, just we've got a minute left, fellas, but final one here on TikTok, James. You've been quite vocal on this one. TikTok has admitted the data is accessible by

China. Probably doesn't come as much of a surprise to people on this, but how secure is Australian data that may be submitted or used here?

PATERSON: Good question, Peter, we don't know and I'm waiting for an answer from TikTok on this because they made a promise to the Australian Parliament in July 2020. They said that all Australian data would be stored in Singapore and the United States and that it would be never handed over to the Chinese government. But we now know due to leaks in the United States that US TikTok data is accessible and has been accessed in China. And if it is the same case for Australian data, then we know it is vulnerable and open to access by the Chinese government and that would be a very grave departure from the promise made by TikTok to the Australian Parliament. So, I'm looking forward to answers.

STEFANOVIC: Okay. James Paterson, Peter Khalil, we're out of time, but thanks as always for your time this morning. We'll talk to you again soon.